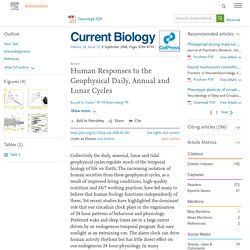 Hankins, S.N. Peirson, R.G. Overview of Circadian Rhythms. Resetting Our Clocks: New Details About How the Body Tells Time. You and Your Biological Clock. The Circadian Clock and Human Health. E.v. 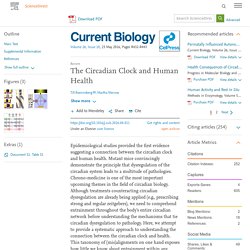 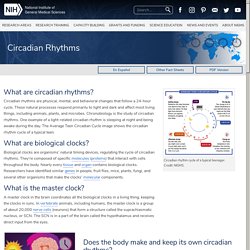 Circadian rhythms are physical, mental, and behavioral changes that follow a 24-hour cycle. These natural processes respond primarily to light and dark and affect most living things, including animals, plants, and microbes. What is Circadian Rhythm? Circadian rhythms are 24-hour cycles that are part of the body’s internal clock, running in the background to carry out essential functions and processes. 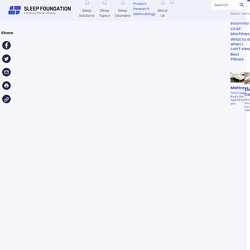 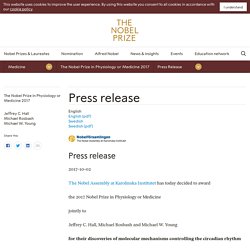 An RNA Molecule That Cues the Internal Clock – Biomedical Beat Blog – National Institute of General Medical Sciences. Dysfunction in our internal clocks may lead to insufficient sleep, which has been linked to an increased risk for chronic diseases. 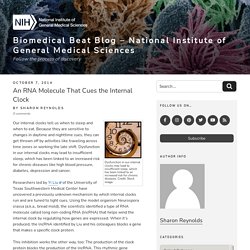 Credit: Stock image. Our internal clocks tell us when to sleep and when to eat. Because they are sensitive to changes in daytime and nighttime cues, they can get thrown off by activities like traveling across time zones or working the late shift. Dysfunction in our internal clocks may lead to insufficient sleep, which has been linked to an increased risk for chronic diseases like high blood pressure, diabetes, depression and cancer. Health Implications of Disrupted Circadian Rhythms and the Potential for Daylight as Therapy. Reporter Review. How to cite The BioClock Studio Takako Noguchi and Susan Golden *This review article assumes basic knowledge of gene expression and light wavelengths Abstract Various organisms create fascinating “glow-in-the-dark” proteins in nature. 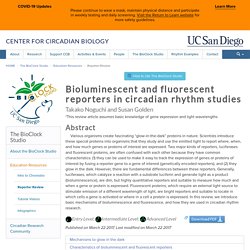 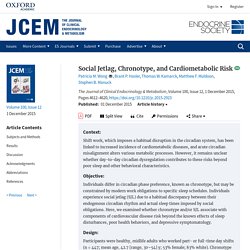 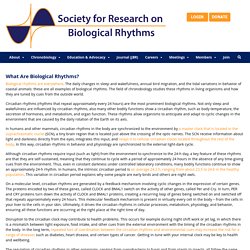 The daily changes in sleep and wakefulness, annual bird migration, and the tidal variations in behavior of coastal animals: these are all examples of biological rhythms. The field of chronobiology studies these rhythms in living organisms and how they are tuned by cues from the outside world. Circadian rhythms (rhythms that repeat approximately every 24 hours) are the most prominent biological rhythms. Not only sleep and wakefulness are influenced by circadian rhythms, also many other bodily functions show a circadian rhythm, such as body temperature, the secretion of hormones, and metabolism, and organ function. These rhythms allow organisms to anticipate and adapt to cyclic changes in the environment that are caused by the daily rotation of the Earth on its axis.

Targeting the Circadian Clock to Treat Cancer. February 13, 2018, by NCI Staff Targeting the body’s biological clock may be a potential strategy for treating cancer, a new study shows. 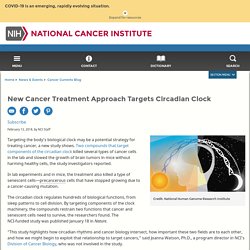 Two compounds that target components of the circadian clock killed several types of cancer cells in the lab and slowed the growth of brain tumors in mice without harming healthy cells, the study investigators reported. Pharmacological activation of REV-ERBs is lethal in cancer and oncogene induced senescence. Circadian Clock, Cancer, and Chemotherapy. I Circadian Clock and the DNA Damage Response 1 Circadian Clock Regulation of DNA Repair Table 1. DNA Repair Mechanisms. Glossary. Actogram: A graphical representation of an organism’s phases of activity and rest over the course of a day Aftereffect: Ongoing characteristics of a rhythm (altered phasing, period length, or amplitude) resulting from previous stimulation. E.g.: lengthening of FRP due to prior entrainment by a zeitgeber-cycle with a period longer than that of the organism's normal FRP.

Intro to Chronobio. Part I. Infographics. How to cite The BioClock Studio Daylight Saving Time Effects. 2019. Ximei Ackerman, Tiffany Phan, Maryanna Sophia Landaverde, Stuart Lee, Adam Seluzicki, and Susan S Golden. A companion to the peer-reviewed article: "Why Should We Abolish Daylight Saving Time? " appearing in the Journal of Biological Rhythms. Download: PDF | Large JPEG image (3300x2550) View Time. Part II. At the heart of a circadian clock is an endogenous, self-sustained oscillator (ESSO). An oscillator is a mechanism that fluctuates between different states repeatedly and with a stable frequency.

Two familiar examples are the swinging of a pendulum or pulsing of a beating heart. Because we are dealing with circadian clocks, the period or length of time that it takes the clock to oscillate is about 24 hours (again: circa-dian, about a day). An oscillator is self-sustained if it can continue to count off these ~1-day-long periods indefinitely without damping out. Unlike a pendulum clock which eventually runs down and needs to be started again, a self-sustained clock requires no external event for it to continue to oscillate. Part III. Part II of this basic overview introduced some of the specialized vocabulary and graphical conventions used by chronobiologists. However, it included several simplifying assumptions regarding circadian clocks. A full understanding of circadian clocks requires seeing what these simplifying assumptions are, and seeing why they are oversimplifications.

The task of this section is to address these points, by providing a fuller account of the complexities of Free-Running Periods (§3.1), and some more complicated details regarding entrainment (§3.2). In the foregoing we have often discussed free-running periods (FRPs) as if every member of the same species shares a single, fixed FRP. For example, we have said that the FRP for Mimosa plants is 22.5 hours. FRPs can be even more variable than this: even for a single individual organism, the FRP can vary under varying environmental conditions. Aschoff’s first rule is that the FRP of nocturnal organisms is typically less than 24. Photoperiodic Flowering - Part 1. PayView. The Neurobiology of Circadian Rhythms. Light and the Human Circadian Clock. Social Jetlag: Misalignment of Biological and Social Time: Chronobiology International: Vol 23, No 1-2. Humans show large differences in the preferred timing of their sleep and activity.

This so‐called “chronotype” is largely regulated by the circadian clock. Both genetic variations in clock genes and environmental influences contribute to the distribution of chronotypes in a given population, ranging from extreme early types to extreme late types with the majority falling between these extremes. Social (e.g., school and work) schedules interfere considerably with individual sleep preferences in the majority of the population. Late chronotypes show the largest differences in sleep timing between work and free days leading to a considerable sleep debt on work days, for which they compensate on free days.