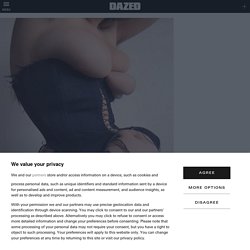 I don’t know her No matter where we thought 2020 would lead us, Boris Johnson essentially pushing rule-abiding singles into a coronavirus-established sex ban definitely came as a shock. That being said, lingerie might just be the coping mechanism needed to make up for all the nights spent in the same worn-in elasticated sweats and tees – or for a sexy Zoom date, if that’s your thing. Fortunately, right now there is no shortage of serotonin-inducing undergarments. Besides Rihanna – who spread some joy through her highly anticipated Savage x Fenty volume two show, featuring Shea Coulée, Indya Moore, Lizzo, Paris Hilton, and more in sexy skin-tight looks – a cast of new designers are tearing up the lingerie rule book and challenging the archaic beauty, gender, and body norms. Get to know five brands changing up the lingerie industry below.

A 21st Century Take on Literary Classic 'Little Women' - Darling Magazine. On most Christmases of my somewhat-older childhood, I watched “Little Women,” squished between my own sisters on our family couch. 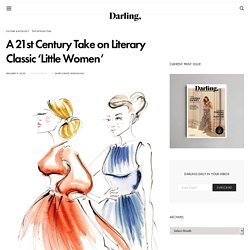 As we jostled for more share of the blanket covering our knees, we visited the familiar scenes of Meg, Jo, Beth and Amy March being led by their Marmee as they grow up in post-Civil War America. What happens when a woman writer decides to write with a male gaze? How does she do it? Virginia Woolf said once that androgyny is essential for good writing. 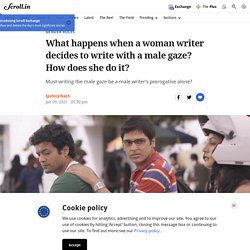 She felt that it liberates an artist from several social constraints and frees writing because the individual does not operate through the cognitive organising principle of gender. I have always believed that idea, and have observed that combining the feminine and masculine can be truly liberating in writing. In fact, I have often wondered about the possibilities of taking it further and writing in a way where the masculine and the feminine are unrecognisable. OPINION: Sexuality in film does not always mean objectification – TommieMedia. Nudity and sexuality have been portrayed in art in many ways throughout history, varying across cultures and mediums. 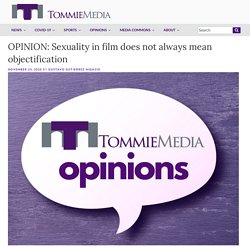 More recently, though, female nudity in film, advertising and music has been overwhelmingly used as a tool to sell a product rather than provide substance to it, and in turn, the term “female objectification” was born. This trend is present in the media and commonly seen in the last decades where bodies— especially women’s—are used as an object to satisfy sexual desires.

For some time, women’s rights movements have spoken against this, causing a wave of change in culture so that over-sexualization is not as common as it was. However, in the film industry, the female body is still often used for no other reason than to attract viewers through their sexual fantasies and retain the viewer’s attention without putting real effort in. But how can a movie with so much explicit violence against women ever be anything but misogynistic? How attitudes towards feminism shape responses to sexualised advertising. Ads that use sexualised images of women elicit similar responses from people with liberal and conservative perspectives on feminism, a study in the Journal of Advertising Research (JAR) has found.

The paper was written by Hojoon Choi (University of Houston), Kyunga Yoo (Korea Telecom), Tom Reichert (University of South Carolina) and Temple Northup (University of Houston). And their analysis distinguished the responses to sexualised images of women in ads among consumers with various attitudes related to feminism. WAP, Sex Through the Female Gaze – The Orion. There has been a lot of conversation and debate surrounding the new song by Cardi B featuring Megan Thee Stallion, “WAP.” 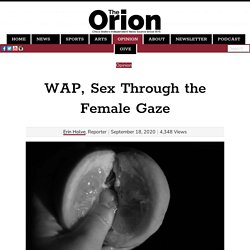 There have been arguments that this song represents female empowerment and others who view it as objectification. ‘Look Up Here!’: 5 Female Directors Reject the Male Gaze. International Women’s Day arrives Sunday on the heels of another season of #OscarSoMale and another prize for the director Roman Polanski, who fled the United States in 1978, after he was convicted of unlawful sex with a minor. 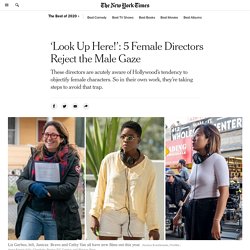 And yet, there are bright spots. To Make it As A Woman In The Pandemic Economy, You’ve Got to Be Unstoppable. Hot Take: Cinderella Was Never Actually Rescued. How a new generation of artists is exploring female sexuality. It’s no surprise that female sexuality is one of the oldest fascinations in art.

The ancient Greeks carved soft-skinned, slender nudes into marble — an idealised woman that has become the archetype for Western beauty. Raphael and Titian perfected the passive woman lounging seductively naked for the male gaze during the Renaissance. Japanese painting masters made shunga under pseudonyms and Picasso constructed lustful distortions of the muses he exploited. Painted, sculpted, and sketched by men for men — the art world told women that they have no place in history other than as objects. The controversial topic of black African women's sexuality. Despite the taboo of sex and sexuality in the Muslim religion, an unusual heated debate within Thandeka Yasmeen Ndaba’s earshot lit an intellectual spark to research more about the subject, writes Vuyo Mkize.

In a society that routinely hypersexualises, objectifies and demeans young black African women when it comes to representing their sexuality, few have taken the time to legitimise local women as sexual beings with perceptions and preferences of their own. The Real Meaning Behind Blurred Lines By Robin Thicke. It is worth noting that Robin Thicke's 2013 "Blurred Lines" single came out well before the #MeToo movement, which went viral when actress Alyssa Milano tweeted about it in October 2017. 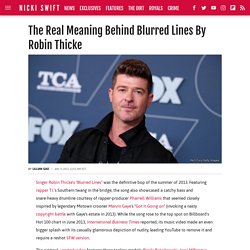 The trend encouraged women to speak out about their experiences with sexual harassment and assault, bringing discussions of rape culture into the mainstream. Thicke's lyrics, like "I hate these blurred lines... I know you want it" and "Do it like it hurt... What, you don't like work" may have promoted that culture, with listeners calling it "rapey," according to The Guardian's Dorian Lynskey. Why is female sexual pleasure still a taboo? From art to culture, education to pornography, the female perspective on pleasure in all its forms is little discussed or truly understood. 'Sex and the City' Had a Massive Diversity Problem — Can a Reboot Fix It?

There was a time when Sex and the City was one of the biggest television shows on the air. Fans flocked to the sexy exploration of four young female friends trying to make their way in the Big Apple, and the series was at once an escapist fantasy as well as a groundbreaking portrayal of real-life questions of sexuality and relationships. While the major development of the series was definitely protagonist Carrie Bradshaw (played by Sarah Jessica Parker) and her love triangle, the show also spent some meaningful time on the friendship between the four main characters, and it was that dynamic that helped propel the show through six seasons and a pair of movies. Now that it looks like the series may be picked up for a reboot, fans are wondering how much of the original magic can be recaptured.

There’s also some serious hope that a contemporary version would fix the show’s glaring diversity problem. ‘Sex and the City’ premiered in 1998. Girls by Girls: Portrayals of Womanhood by Female Photographers. March 06, 2020 Carnival Strippers by Susan Meiselas “I think in truth it was really the turning point for me. Before that I don’t think I had a vision of what it would mean to be a photographer,” Susan Meiselas says, referring to her seminal series Carnival Strippers. Meiselas was 24 when she encountered carnival dancers and began photographing them, initially struck by the way that the women were making a living from men objectifying them. Mulan: why it was a missed opportunity to create a strong Asian woman on screen. As a child who grew up in China with little exposure to Disney until I was eight, the idea of a princess marrying a prince and living happily ever after was something entirely foreign.

I was more familiar with the fox and snake spirits in Chinese folklore that transformed into beautiful women and sorceresses, and the cross-dressing heroines of wuxia martial-arts TV shows of the 90s. It’s no surprise, then, that Disney’s 1998 film Mulan was more relatable than Sleeping Beauty. The fine line between art and pornography - BBC Culture. Erdem’s steps to size inclusivity show fashion has a plus size problem.

British luxury fashion label Erdem has announced it will introduce inclusive sizing, from a 6 to a 22 both online and in its Mayfair store, across all its forthcoming collections, starting with Pre-Spring 2021. Erdem, which previously only offered larger sizes to bespoke clients, is “committed to making the brand inclusive for all.” It’s a move that will see the label join a reasonably short list of luxury fashion designers who already offer larger sizing that includes Mary Katranzou, Roland Mouret, Mara Hoffman, Jonathan Simkai, Carolina Herrera, Christopher Kane and Diane Von Furstenberg.

The decision is undoubtedly one to be celebrated, and yet it begs the question, why do so few luxury labels offer bigger sizes? 'Know My Name': All-female exhibit opens at National Gallery Australia. Works by a diversity of Australian women artists will be showcased at the National Gallery Australia for 11 weeks with a commitment to understand, champion and celebrate more female artists and their works. The exhibit, Know My Name: Australian Women artists 1900 to Now, includes works by Lindy Lee, Nyapanyapa Yunupiŋgu, Bonita Ely, Jill Orr, Savanhdary Vongpoothorn and Fiona Foley, plus a commission from the Tjanpi Desert Weavers.

Out of place: the exhibition shining a light on under-seen female artists. Like most museums, the Brooklyn Museum keeps much of its art collection in storage. The Best Female Led Art Exhibitions For Spring 2020 In The UK. Cardi B: "Every single time a female rapper comes out, people wanna start fake beef" Cardi B has discussed promoting sisterhood among artists in a new interview, explaining there’s no need to down talk other female artists. Representation of women in films is getting worse, new study reveals. It's 2021 and we're still promoting Barbie stereotypes. TEDxUniversityofJohannesburg. Nice Legs- The Media Representation of Female Athletes. How to survive the music industry as a woman. Documentary on Societal Beauty Standards. Women and Social Media. The Art of Feminism: Does a feminist aesthetic exist? Ella Kruglyanskaya – 'How Can I Change the Representations of Women?' Questioning Feminism and Women In Art. Why are there so few female artists in the National Gallery?

The "Sex Factor" for Women in Science. Men vs. Women: How the Media Portrays Mental Illness. #ConfidentEitherWay – How Makeup Affects Mental Health. Can a Woman Be Successful Without Wearing Makeup? Always #LikeAGirl. YouTube. The Female Gaze: The Contemporary Artists Who Took Back Female Identity in Art. Mari Katayama, 'bystander #014', 2016 | © Mari Katayama. Courtesy of rin art association For centuries, the depiction and role of women in art was determined by men.

These boundary-breaking female artists seek to redress this imbalance, surpassing the male-dominated barrier to reframe the representation of the female figure in art. HuffPost is now a part of Verizon Media. How Are Women Portrayed in Top-Grossing Movies? Hollywood has come under scrutiny in recent years for its lack of representation and diversity. Gender Stereotypes in Science Education Resources: A Visual Content Analysis. Abstract More men are studying and working in science fields than women. This could be an effect of the prevalence of gender stereotypes (e.g., science is for men, not for women). Tandfonline. 8 Women Who Turned Food into Feminist Art. 10 Examples of Women's Portrayal in Ads, From the Good to the Bad to the Completely Sexist. Female Video Game Characters- Poor Portrayal Of Women's Characters.

The Best Photo Stories of 2020: Portrayals of Sex and Identity. The Best Photos of 2020: Portrayals of Womanhood by Female Photographers. HuffPost is now a part of Verizon Media. Portrayal Of Women Then & Now - Lets Talk Ads. "The female gaze is brilliant:" Phoebe Dynevor proud of Bridgerton's sex scenes. What Lizzo's Diet Backlash Teaches Us About Fat Phobia and Racism. Zola Guide to Release Date, Cast News, Trailer and Spoilers. David Hockney: The Arrival of Spring, Normandy, 2020. Tracey Emin / Edvard Munch.