Sense of Identity in Adolescence 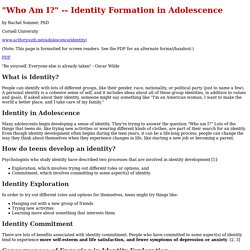 See the PDF for an alternate format/handout.) "Be yourself. What is Identity? People can identify with lots of different groups, like their gender, race, nationality, or political party (just to name a few). Identity Formation in Adolescence: Change or Stability? Adolescent Identity Development - Adolescence - ACT for Youth. Social Development of Adolescents: Identity. Erikson's Psychosocial theory. 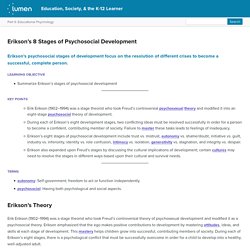 Erikson emphasized that the ego makes positive contributions to development by mastering attitudes, ideas, and skills at each stage of development. This mastery helps children grow into successful, contributing members of society. During each of Erikson’s eight stages, there is a psychological conflict that must be successfully overcome in order for a child to develop into a healthy, well-adjusted adult. Erik Erikson. Erikson's Identity vs. Role Confusion in Adolescent Development Video with Lesson Transcript. Marcia's Four Identity Statuses. James Marcia's Identity Theory: Understanding Adolescents' Search For Identity. 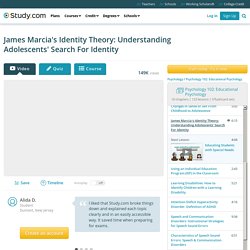 Did you know? Study.com has a library of 550,000 questions and answers for covering your toughest textbook problems Students love Study.com I love the way expert tutors clearly explains the answers to my homework questions. . - Maritess, College Student Enrolling in a course lets you earn progress by passing quizzes and exams. Earn certificates of completion You will also be able to: Create a Goal Create custom courses Get your questions answered Upgrade to Premium to add all these features to your account! 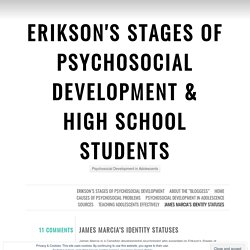 His research and writings have largely focused on adolescent development. His work was to identify and classify processes that adolescents go through when they experience identity crises. The four processes that Marcia defined are: Foreclosure In this state, an adolescent may blindly accept whatever ideology or values system that has been given to them from their parents or family members. 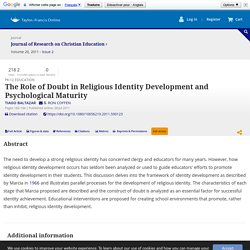 However, how religious identity development occurs has seldom been analyzed or used to guide educators' efforts to promote identity development in their students. This discussion delves into the framework of identity development as described by Marcia in 1966 Marcia , J. E. ( 1966 ). Development of identity in occupational domain. Identity and Adolescents: How Adults Can Help - NCYI - National Center for Youth Issues. By Cheryl Jones, ACSW, Adolescent and Family Counselor This is an article that was printed in The Fourth and Fifth Rs: Respect and Responsibility, Volume 10, Issue 2, Winter 2004. 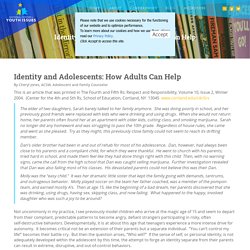 (Center for the 4th and 5th Rs, School of Education, Cortland, NY 13045 www.cortland.edu/c4n5rs The elder of two daughters, Sarah barely talked to her family anymore. She was doing poorly in school, and her previously good friends were replaced with kids who were drinking and using drugs. When she would not return home, her parents often found her at an apartment with older kids, cutting class, and smoking marijuana. Not uncommonly in my practice, I see previously model children who arrive at the magic age of 15 and seem to depart from their compliant, predictable patterns to become angry, defiant strangers participating in risky, often self-destructive behaviors. 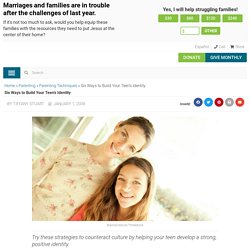 Five Ways to Help Teens Feel Good about Themselves. No one wants to hang out with me. 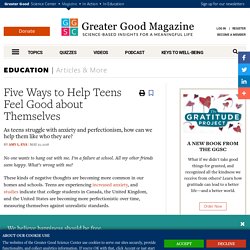 I’m a failure at school. All my other friends seem happy. What’s wrong with me? These kinds of negative thoughts are becoming more common in our homes and schools. Teens are experiencing increased anxiety, and studies indicate that college students in Canada, the United Kingdom, and the United States are becoming more perfectionistic over time, measuring themselves against unrealistic standards. Why is this happening? A 2018 study of early adolescents suggests that self-concept (your perception of self) plays a central role in emotional well-being. So, how can we influence how students think about themselves? 1. Although you may have heard this before, kids really can benefit from regular exercise (especially when their tendency is to sit in front of a screen).

Apparently, the exercise setting also matters. Adolescents’ self-concept is most strongly linked to their sense of physical attractiveness and body image, an area where many people struggle. 2.