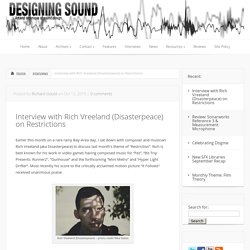 Rich is best known for his work in video games having composed music for “Fez”, “Bit.Trip Presents: Runner2”, “Gunhouse” and the forthcoming “Mini Metro” and “Hyper Light Drifter”. Most recently his score to the critically acclaimed motion picture “It Follows” received unanimous praise. Rich Vreeland (Disasterpeace) – photo credit Nika States Designing Sound: When you think of restriction what does it mean to you? Rich Vreeland: It means a lot to me. Restrictions can be challenging, they can also be beneficial. I was more laid-back about “Gunhouse” and so it was different. DS: As you’ve made a name for yourself, I imagine it becomes more common that they are more trusting in you and your aesthetic, giving you less restrictions, they hand you the keys as you say. RV: Yes. RV: It’s something that I’ve dabbled in. Philosophy of Music Design in Games - Fez. 'It Follows' from Video Gaming: An interview with Soundtrack Composer Disasterpeace.

Nowadays, it seems rare for a horror film with any artistic merit to open in more than a handful of theaters. 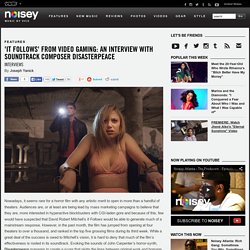 Audiences are, or at least are being lead by mass marketing campaigns to believe that they are, more interested in hyperactive blockbusters with CGI-laden gore and because of this, few would have suspected that David Robert Mitchell’s It Follows would be able to generate much of a mainstream response. However, in the past month, the film has jumped from opening at four theaters to over a thousand, and ranked in the top five grossing films during its third week. While a great deal of the success is owed to Mitchell’s vision, it is hard to deny that much of the film’s effectiveness is rooted in its soundtrack. Evoking the sounds of John Carpenter’s horror-synth, Disasterpeace manages to create a score that skirts the lines between original work and homage.

So where did Mitchell find him? And you had to sort of break with that with the release of the It Follows soundtrack. Music Workshop - FEZ. Episode #206: Disasterpeace. 002 IVGM – Disasterpeace, Adventure – FEZ. Podcast: Play in new window | Download In this episode, I talk with Rich Vreeland, who also goes by the name Disasterpeace. 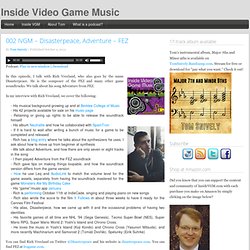 He is the composer of the FEZ and many other game soundtracks. We talk about his song Adventure from FEZ. In my interview with Rich Vreeland, we cover the following: His musical background growing up and at Berklee College of MusicHis 42 projects available for sale on his music pageRetaining or giving up rights to be able to release the soundtrack himselfHis album Neutralite and how he collaborated with SpamTronIf it is hard to wait after writing a bunch of music for a game to be completed and releasedRich has a blog entry where he talks about the synthesizers he uses.

You can find Rich Vreeland on Twitter @Disasterpeace and his website is disasterpeace.com. Next week I am interviewing Grant Kirkhope who wrote the soundtrack for Kingdoms of Amalur, GoldenEye, Banjo-Kazooie, Viva Pinata, Perfect Dark and many more. Is there a game composer you’d like to hear from? FEZ's Composer Disasterpeace on Creative Music Theory for Games. Personal FX: The Benefits of Designing Sound for Indies. Philosophy of Music Design in Games - Fez. Talking Game Music with FEZ Composer Disasterpeace - Rev3Games Originals. Login - Pyramind Online. Video Tip: Creating Depth in Drums by Using Foley Pyramind Training – Synthesis & Sound Design Instructor – Taylor Elsasser – runs you through his approach while constructing drum patterns and using foley to incorporate uniqueness & life. 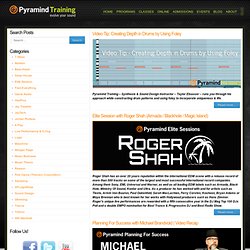 Elite Session with Roger Shah (Armada / Blackhole / Magic Island) Roger Shah has an over 20 years reputation within the international EDM scene with a release record of more than 500 tracks on some of the largest and most successful international record companies. Among them Sony, EMI, Universal and Warner, as well as all leading EDM labels such as Armada, Black Hole, Ministry Of Sound, Kontor and Ultra. As a producer he has worked with and for artists such as Tiesto, Armin Van Buuren, Paul Oakenfold, Sarah MacLachlan, Ferry Corsten, Kosheen, Bryan Adams or Moya Brennan who is best known for her works with Hollywood producers such as Hans Zimmer.

Elite Session with K-Theory | Video Recap. Game Front 1-On-1: Fez Composer Disasterpeace. Game Front 1-on-1 is a continuing series featuring interviews with and personality profiles on a variety of people inintim the vast and diverse community of gaming, including creative fans, passionate players, amateur developers and everyone in between. 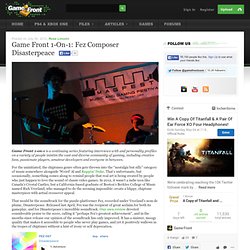 For the uninitiated, the chiptunes genre often gets thrown into the “nostalgic but silly” category of music somewhere alongside ‘Weird’ Al and Rappin’ Duke. That’s unfortunate, but occasionally, something comes along to remind people that real art is being created by people who just happen to love the sound of classic video games. In 2012, it wasn’t a indie icon like Canada’s Crystal Castles, but a California-based graduate of Boston’s Berklee College of Music named Rich Vreeland, who managed to do the seeming impossible: create a blippy, chiptune masterpiece with actual crossover appeal. Talking Game Music With FEZ composer Disasterpeace.