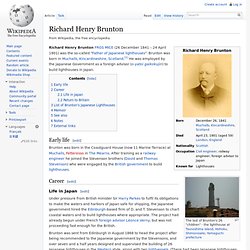 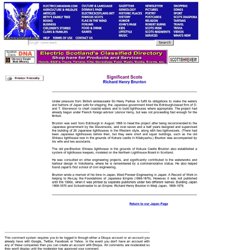 Stevenson to chart coastal waters and to build lighthouses where appropriate. The project had already begun under French foreign advisor Léonce Verny, but was not proceeding fast enough for the British. Brunton was sent from Edinburgh in August 1868 to head the project after being recommended to the Japanese government by the Stevensons, and over seven and a half years designed and supervised the building of 26 Japanese lighthouses in the Western style, along with two lightvessels. Some KELLY MONK CAVAYE BRUEN EVANS HAMILTON TORRANCE FRIEDLANDER ancestry, and the kinsfolk of Alexander COWAN. 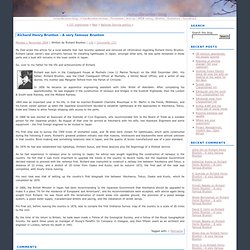 Richard (great name!) Was primarily famous for installing lighthouses in Japan, amongst other acts, he was quite renowned in those parts and a bust still remains in the town centre in Japan. So, over to my father for the life and achievements of Richard. Richard was born in the Coastguard House at Muchalls (now 11 Marine Terrace) on the 26th December 1841. His father, Richard Brunton, was the Chief Coastguard Officer at Muchalls, a retired Naval Officer, and a writer of sea stories.

In 1856 he became an apprentice engineering assistant with John Willet of Aberdeen. 1865 was an important year in his life, in that he married Elizabeth Charlotte Wauchope in St. In 1868 he was elected an Associate of the Institute of Civil Engineers, who recommended him to the Board of Trade as a suitable person for the Japanese project. Richard Henry Brunton. Father of lighthouses in . 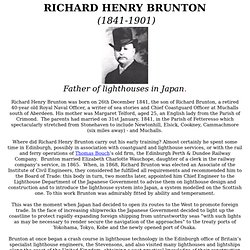 Japan - Pharology. Once begun, the rapid growth in industrialisation of Japan had a very big effect on the number of lighthouses. 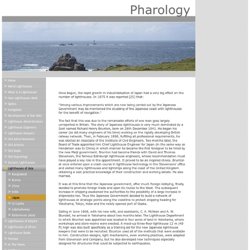 In 1875 it was reported [25] that: "Among various improvements which are now being carried out by the Japanese Government may be mentioned the studding of the Japanese coast with lighthouses for the benefit of navigation. " The fact that this was due to the remarkable efforts of one man goes largely unreported in Britain. The story of Japanese lighthouses is very much dominated by a Scot named Richard Henry Brunton, born on 26th December 1841.

He began his career (as did many engineers of his time) working on the rapidly developing British railway network. It was at this time that the Japanese government, after much foreign lobbying, finally decided to promote foreign trade and open its routes to the West. Sailing in June 1868, with his new wife, and assistants, C. There were many difficulties to overcome and Brunton was noted for his doggedness and desire to succeed. Richard Henry Bruntonの意味. Public Art Around the World - Richard Henry Brunton Memorial. Haiku Topics, Theory and Keywords .. (WKD - TOPICS ): November 2013. [ . 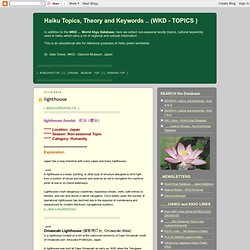