Asperger’s and Marriage. Lessons from an Aspergers-NT Marriage (By WordRidden via Flickr. 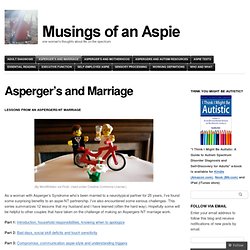 Used under Creative Commons License.) As a woman with Asperger’s Syndrome who’s been married to a neurotypical partner for 25 years, I’ve found some surprising benefits to an aspie-NT partnership. I’ve also encountered some serious challenges. This series summarizes 12 lessons that my husband and I have learned (often the hard way). Part 1: Introduction, household responsibilities, knowing when to apologize Part 2: Bad days, social skill deficits and touch sensitivity. Ansperger's and marriage/ ltr/ spouses/ adult relationships. Married to an Aspie and tired of hearing about low marriage survival rates <rant> : aspergers.

Married to an Aspie and tired of hearing about low marriage survival rates <rant> : aspergers. David Finch: How An Asperger Syndrome Diagnosis Saved My Marriage. It was my wife Kristen, a speech therapist who had worked with autistic children, who was most suspicious about my behavior. 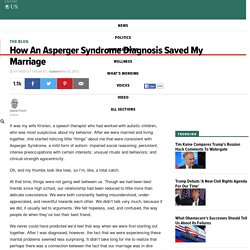 After we were married and living together, she started noticing little “things” about me that were consistent with Asperger Syndrome, a mild form of autism: impaired social reasoning; persistent, intense preoccupations with certain interests; unusual rituals and behaviors; and clinical-strength egocentricity. Oh, and my thumbs look like toes, so I’m, like, a total catch. At that time, things were not going well between us. Though we had been best friends since high school, our relationship had been reduced to little more than delicate coexistence. We were both constantly feeling misunderstood, under-appreciated, and resentful towards each other.

We never could have predicted we’d feel that way when we were first starting out together. And Kristen was given a new perspective on who she was married to. Full-spectrum marriage: married to an Aspie. Kristi Sakai Having a successful marriage requires effort, but when one partner has Asperger Syndrome it poses additional challenges. 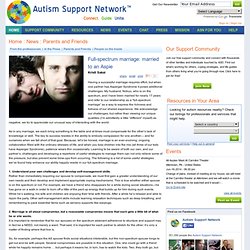 My husband, Nobuo, who is on the spectrum, and I have been married for nearly 17 years and refer to our relationship as a “full-spectrum marriage” as a way to express the richness and fullness of our shared experience. We acknowledge our challenges, but rather than viewing our unique qualities (I’m admittedly a little “different” myself) as negative, we try to appreciate our unusual way of interacting with the world. As in any marriage, we each bring something to the table and at times must compensate for the other’s lack of knowledge or skill. The key to success resides in the ability to embody compassion for one another— and for ourselves when we fall short of that goal. Www.aspia.org.au/pdf/Grigg_Is_There_Hope.pdf. Marriage with Asperger’s Syndrome: 14 Practical Strategies. Marriage with Asperger's Syndrome: 14 Practical Strategies By Eva Mendes, M.A., Psychotherapist & Couple's Counselor The excerpts below focus on interventions for relationships in which an individual with Asperger Syndrome (AS) is partnered with a spouse or partner who does not have AS (a neurotypical). 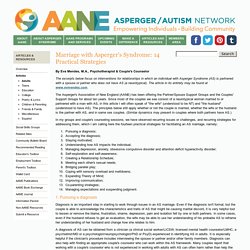 The article in its entirety may be found at www.evmendes.com. The Asperger's Association of New England (AANE) has been offering the Partner/Spouse Support Groups and the Couples' Support Groups for about ten years. Since most of the couples we see consist of a neurotypical woman married to or partnered with a man with AS, in this article I will often speak of "the wife" (understood to be NT) and "the husband" (understood to have AS). In my groups and couple's counseling sessions, we have observed recurring issues or challenges, and recurring strategies for addressing them, which I am calling here the fourteen practical strategies for facilitating an AS marriage, namely: 1. 2.

What sort of comforting would you like? I have submitted my story because I found so much reassurance and support from reading other women's accounts of their relationships with a person with Asperger syndrome. 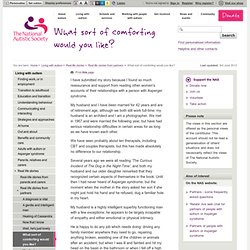 My husband and I have been married for 42 years and are of retirement age, although we both still work full-time: my husband is an architect and I am a photographer. We met in 1967 and were married the following year, but have had serious relationship difficulties in certain areas for as long as we have known each other. We have seen probably about ten therapists, including CBT and couples therapists; but this has made absolutely no difference to our relationship. Several years ago we were all reading 'The Curious Incident of The Dog in the Night-Time', and both my husband and our older daughter remarked that they recognized certain aspects of themselves in the book.

He is adamant that he is not gay. His interest in me is as a companion and as a comforter in times of stress. By Sarah. Www.evmendes.com/uploads/ASMarriage14Strategies.pdf. Asperger’s and Marriage. What Everybody Ought to Know About Aspergers and Marriage. Couple in love, by pedrosimoes on Flickr Creative Commons Young love. It's so beautiful, so wonderful, it takes your breath away. Like any other romantic couple, two adults who are in love in an Asperger's relationship are on cloud nine when they first meet.