Quiz: The 36 Questions That Lead to Love 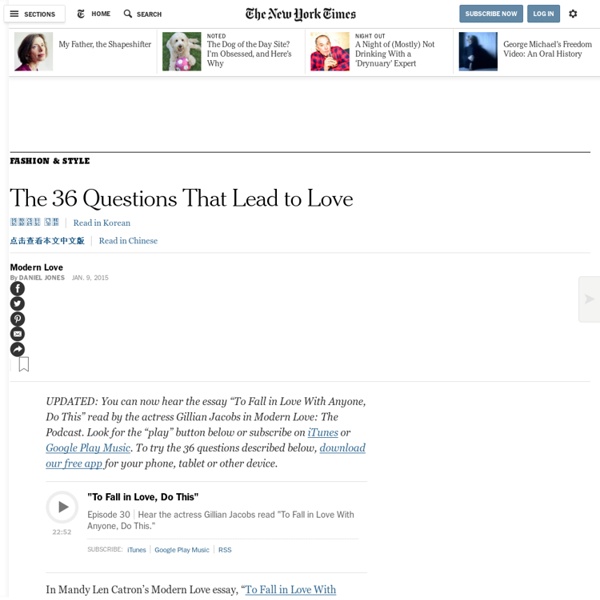 To Fall in Love With Anyone, Do This I Googled Dr. Aron’s questions; there are 36. We spent the next two hours passing my iPhone across the table, alternately posing each question. They began innocuously: “Would you like to be famous? nucleus accumbens : Bipolar Network News thalamus At the 2014 meeting of the International College of Neuropsychopharmacology, researcher Scott Russo described characteristics of rodents who showed depression-like behavior after 10 days of exposure to a larger, more aggressive animal (a phenomenon known as defeat stress). These animals exhibited many behaviors that resembled human depression, including anxiety-like behaviors while navigating a maze; activation of the hypothalamic-pituitary-adrenal axis; circadian rhythm abnormalities; metabolic changes such as glucose intolerance; susceptibility to addiction; anhedonia, a lack of interest in sucrose, sex or intracranial self-stimulation; and profound and permanent social avoidance.

The Science Of Love Valentines Day is coming up! We wanted to post all of our favorite articles and videos on romance, love, sex and dating for your enjoyment. What’s Your Love Language? Do you know the 5 love languages? Dipping Into a French Melting Pot Photo Pursuits By FARAI CHIDEYA ventromedial prefrontal cortex November 22nd, 2011 in Neuroscience Images of prisoners’ brains show important differences between those who are diagnosed as psychopaths and those who aren’t, according to a new study led by University of Wisconsin-Madison researchers. The results could help explain the callous and impulsive anti-social behavior exhibited by some psychopaths.

Is your partner your #1 fan? One of the most important goals you can strive for in business is to understand, anticipate and consistently fulfill the deepest needs of your clients. Because the more value you are able to add to your customer, the more success you will have. We call this creating a “raving fan customer,” and it’s one of Tony’s 7 Forces of Business Mastery. But did you know this principle can also be used to better your relationship? By focusing on creating a raving fan culture at home, you can put yourself into the positive, loving and relationship-focused mindset that is necessary to build a strong, committed, secure partnership. This is one of the greatest gifts you can give to your partner — and to yourself.

anesthesia and hypoxia Hypoxia has many different causes, but the bottom line is that metabolism in the cells of the body receive too little oxygen to function normally. Various basic causes of tissue hypoxia are shown by the list below: Hypoxic hypoxia. The body functions normally, but the concentration of oxygen in the inspired air is low enought to cause tiisue hypoxia because too little oxygen enters the blood.Pulmonary hypoxia. Lung function is so abnormal due to disease or injury that insufficient oxygen is transferred from inspired air into the blood. Anemic hypoxia. Psychology of Love: 10 Studies Every Lover Should Know Psychology of love: Brain map of love, the role of kissing, how couples come to look similar, what kills a relationship and more… “Love does not consist in gazing at each other, but in looking outward together in the same direction.” ~ Antoine de Saint-Exupéry From the initial moment of attraction to growing old together, here are 10 psychology studies that all lovers should know. 1. Falling in love takes one-fifth of a second It takes a fifth-of-a-second for the euphoria-inducing chemicals to start acting on the brain when you are looking at that special someone.

What Are Emotions? By Kendra Cherry Updated March 25, 2015. Question: What Are Emotions? Emotions seem to rule our daily lives. We make decisions based on whether we are happy, angry, sad, bored, or frustrated. 20 Habits Happy Couples Have (But Never Talk About) Nothing in this world is more difficult than love. And nothing is more worth it. A happy couple is not a ‘perfect couple’ that comes together, but an imperfect couple that learns to enjoy each other’s differences, and works together every day to create something special. New Gothic New Gothic or Neo-Gothic is a contemporary art movement that emphasizes darkness and horror. Manifesto[edit] "The Neo Gothic Art Manifesto" was written by Gothic subculture artist Charles Moffat in 2001,[1] who also coined the term in an effort to differentiate it from Gothic architecture. The manifesto was later updated in 2003, but both versions emphasize rebellion against normality. Gothic exhibition, Boston 1997[edit] Francesca Gavin's reformulation[edit]

Drive theory In psychology, a drive theory, theory of drives or drive doctrine[1] is a theory that attempts to analyze, classify or define the psychological drives. A drive is an instinctual need that has the power of driving the behaviour of an individual;[2] an "excitatory state produced by a homeostatic disturbance".[3] Drive theory is based on the principle that organisms are born with certain psychological needs and that a negative state of tension is created when these needs are not satisfied. When a need is satisfied, drive is reduced and the organism returns to a state of homeostasis and relaxation. According to the theory, drive tends to increase over time and operates on a feedback control system, much like a thermostat.

Know Your Love Language: Learn to Speak “Quality Time” Ever wonder how many languages are spoken around the world today? Is it 50? 100? Maybe even 500? In fact, there are at least 7,111 languages actively spoken on Earth! Yet despite the vast number of dialects devised by our species, when it comes to the language of love, our hearts only know a handful.