Diet could improve depression symptoms in three weeks, study finds. It can take antidepressants up to six weeks to kick in, but findings of one small study indicate improving diet can help to alleviate symptoms of depression in as little as three weeks. 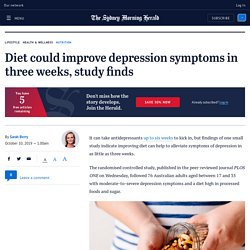 The randomised controlled study, published in the peer-reviewed journal PLOS ONE on Wednesday, followed 76 Australian adults aged between 17 and 35 with moderate-to-severe depression symptoms and a diet high in processed foods and sugar. The participants were split into two groups; one remained on their regular diet while the second was given meal ideas, a shopping list and tips on how to deal with challenges such as the cost of some fresh foods, or time pressure, and instructed to eat a Mediterranean-style diet and to limit junk foods. The-facts-about-sugar-and-cancer-20180715-p4zro7. Teaspoons-sugar-soft-drink-labels-obesity-20180711-p4zqtf. Fat Loss Diets and Dieting Archives - Bodyrecomposition. Ketogenic Diet Resource. KetoNutrition. Doctors Supporting Metabolic Therapies and/or HBOT Dr. 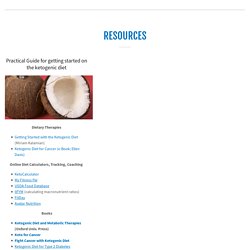 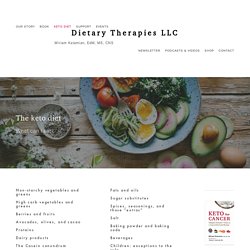 Best practice is to use a combination of animal (and fish) fats, coconut oil, medium-chain triglycerides, monounsaturated oils (olive, avocado), omega-3 oils (from ground flaxseed, chia, hemp hearts, fatty fish, fish oil) and omega-6’s (limited amounts, preferably from nuts and seeds, not oils). When choosing oils, always look for cold-pressed, organic, and unrefined varieties- that’s not a guarantee of quality but at least it’s a step in the right direction. (Avocado does not have to be organic.)

Read labels and avoid any products made with refined (which means solvent-treated) oils extracted from GMO plants such as soybean, canola, corn, and safflower. When sautéing or stir frying, use lard or other animal fat. Ketogenic-diet-resources.com - This website is for sale! - ketogenic-diet-resources Resources and Information. The Secrets of Sugar. For many of us, sugar provides an instant feeling of warmth and comfort. 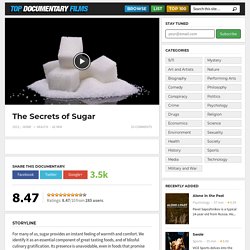 We identify it as an essential component of great tasting foods, and of blissful culinary gratification. Its presence is unavoidable, even in foods that promise higher levels of nutritional value. In many corners of the globe, the human desire for sugar seems unquenchable. In fact, one would be hard-pressed to find an addiction more commonplace than the one we experience for sugar. But it's an addiction that could be killing us in record numbers. The documentary titled The Secrets of Sugar examines this addiction and its perilous impact on the well-being of our global society. The Protein Bar Sampler from YouBar's Innovation Team - YouBar Inc. These nutrient deficiencies are linked to mental ill health. New research linking the level of certain nutrients in the body to mental illness could reduce the risk of those who are vulnerable, and improve the outcomes of people already diagnosed with conditions. 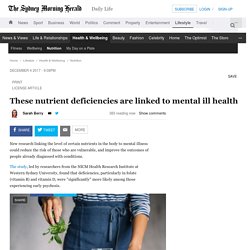 The study, led by researchers from the NICM Health Research Institute at Western Sydney University, found that deficiencies, particularly in folate (vitamin B) and vitamin D, were "significantly" more likely among those experiencing early psychosis. The same deficiencies (along with, to a lesser extent, vitamins C and E) have previously been linked with long-term schizophrenia and depression. "There's more evidence arising that nutrition and particularly poor nutrition may be impacting on people's mental health and conditions like depression and low mood," said lead author, postdoctoral research fellow Joseph Firth. "The patients with the lower levels of these nutrients also had the worst mental health.

Get the latest news and updates emailed straight to your inbox. Why Am I Always Hungry? Here Are 6 Reasons. You've just eaten a large, nutritious dinner and sit down to watch TV, but you're still hungry for something sweet or salty. 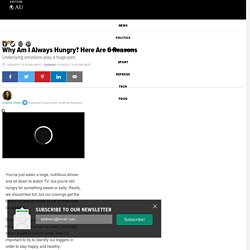 Really, we should feel full, but our cravings get the best of us and an entire block of chocolate disappears. There are many reasons we can feel hungry even when we've eaten, from high stress levels to lack of sleep, and it's important to try to identify our triggers in order to stay happy and healthy. To understand the reasons why we constantly feel hungry or snack endlessly -- as well as find strategies to curb emotional eating and regulate appetite -- HuffPost Australia spoke to Libby Weaver, aka Dr Libby, a leading nutritional biochemist, bestselling author and international speaker. Getty 1. "The first reason is you have a physical need for food," Weaver told HuffPost Australia. 9 Signs You're Not Eating Enough Fat. Dietary fats have gone through a lot over the years. 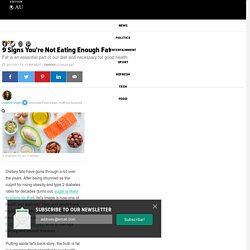 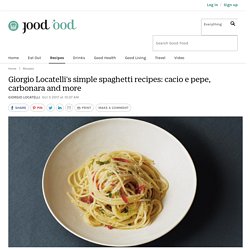 These spaghettis are not just convenient, quick and easy dishes; they can also be seductively brilliant, a perfect example of how a dish can be so much more than a sum of its parts. Each recipe makes enough for six. With the exception of the cacio e pepe, allow one litre of water to every 100g of pasta, and add a teaspoon of salt per litre of water. Hospitals and health groups demand 20 per cent soft drink tax. A 20 per cent tax on sugary drinks is being proposed by Australia's leading health organisations as part of a tough new strategy to tackle obesity, which they now say poses a greater risk to the nation than smoking. 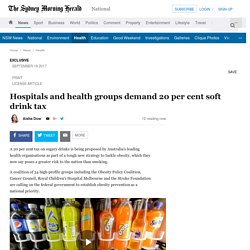 A coalition of 34 high-profile groups including the Obesity Policy Coalition, Cancer Council, Royal Children's Hospital Melbourne and the Stroke Foundation are calling on the federal government to establish obesity prevention as a national priority. This is a modal window. This modal can be closed by pressing the Escape key or activating the close button. Beginning of dialog window. Escape will cancel and close the window. How Much Protein In Eggs, Chicken, Tuna, Beef, Dairy And Nuts. Protein is a staple macronutrient in our diet and comes in a range of different animal and plant-based forms. 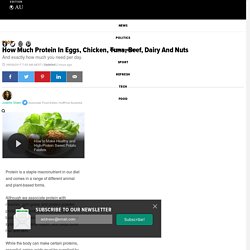 Although we associate protein with muscles, gym goers and protein powder, protein is important for more than just building muscles -- it supports our immune system and overall health, and helps build hair and skin. While the body can make certain proteins, essential amino acids must be supplied by the food we eat. This is why it's important to eat a certain amount of protein each day. What is protein and why do our bodies need it? "Protein is the nutrient that is considered to be the 'building block' of our bodies and is therefore an essential part of our diets," Anna Debenham, accredited practising dietitian from The Biting Truth, told HuffPost Australia.

"We need it to build healthy skin, hair and blood. Getty "Protein is built from amino acids, so when it gets broken down in our bodies, it is broken down into amino acids," Debenham explained. There are three types of amino acids: DIET AND MENTAL HEALTH IN CHILDREN AND ADOLESCENTS – Food and Mood Centre. Childhood and adolescence is a period of rapid development, and both are critically important to developing a foundation for good physical and mental health in adulthood. Unfortunately, studies have shown that young people are not meeting many health-promoting recommendations, particularly when it comes to eating a healthy diet.

In Australia, fewer than 5% of adolescents eat the recommended amount of fruits and vegetables and they are much more likely to be regularly eating nutrient poor, high sugar foods such as lollies, snacks and baked goods. These dietary patterns are understood to have negative consequences for future physical health, but the scientific research also shows that what children and adolescents are eating is critically important to their brains and mental health as well. What do we know? Ask The Doctor - Series 1 Ep 2 Diet. Real Meal Revolution. William Banting was a British undertaker who was very obese and desperately wanted to lose weight. In the year 1862 he paid a visit to his doctor, William Harvey, who proposed a radical eating plan that was high in fat but included very few carbohydrates. By following this eating plan Banting experienced such remarkable weight loss that he wrote an open letter to the public, the "Letter on Corpulence", which became widely distributed.

As more people started following this eating plan to lose weight, the term "banting" or to "bant" became popularised. What are we designed to eat? Banting merely discovered what human beings were designed to eat: what early humans ate 200,000 years ago. The disastrous dietary guidelines In 1977 the US government published the Dietary Goals for the United States, a set of guidelines that advocated a diet high in carbs and low in fat, exactly the opposite of the diet we have been following for much of our existence. The common misconception The Cholesterol Myth. Jamie Oliver's Food Waste Tips Will Make Your Cooking Even Better. Food waste isn't exactly a 'sexy' topic like brownies or doughnuts, but it's an incredibly important one -- and it's not going away. Australians waste millions of tonnes of perfectly edible food each year. For an idea of what that looks like, every week we throw out one in five bags of food shopping. That adds up to approximately $1,000 wasted per year.

Google Docs - create and edit documents online, for free. Banting Bread – the ONLY bread recipe you will need. The Keto King (a.k.a The Banting Boss) is creating videos with recipes, meal ideas & tips for low carbers! Hey hey hey guys, it's The Keto King. I make videos to help people, period. How Much Sugar in Shakes and Smoothies? Five Strategies for Being Lean Year Round - STRENGTH SENSEI. This week I posted a few physique pictures to illustrate that staying lean is achievable after the age of fifty, and that you don’t have to lose your condition over time. The number of texts, emails and Whatsapp messages I received expressing they were inspired by the photos of my lean physique touched me.

Many asked for my secrets. The truth is, none of my secrets cost anything, nor do they have to do with macros ratios, calories or timing of meals. The reality is that if your support systems are shit, you will still look and feel like shit. Even if you have a stellar diet customized for you, it won’t do much if you don’t have a support system. Here are the paradigms: Strategy 1 – Sleep is king Sleep is the most important because it is the most effective regeneration system we have but it is also the most underrated. Strategy 2 – Apply the 5 x 5 rule I particularly like that Jim Rohn quote “You are the average of the five people you spend the most time with”. Strategy 3 – Be grateful. Meatballs braised in tomato sauce recipe Recipe.