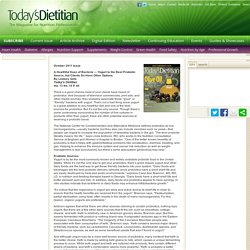 Ayurveda, Genomics and Big Data: Future of Predictive Medicine. So this other day, the very insightful Sramana Mitra asked me to answer this question on Quora. 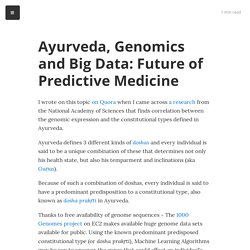 I will reproduce that answer here verbatim for greater visibility! I'd attribute the lack of product entrepreneurship to the culture that schooling has imparted to the current generation Indians. Sir Ken Robinson's TED talk: on education really struck a chord in me and probably many other Indians who were educated similarly.

The school expected you to do THE RIGHT THING (TM) almost as if there is one such thing. The plurality of human capability (in the words of Ken) is lost. Quite a few outliers indeed exist and educate themselves out of what they have been taught. Things have changed quite a bit now (at least in the metros) in early education and I expect the current generation schooling Indians will be positioned better and will produce as many product entrepreneurs as anywhere else. Faculty Candidate Talk: Transforming Healthcare through Big Data Analytics: The Role of Natural Language Processing. Palmer Commons, Fourth Floor, Great Lakes room VG Vinod Vydiswaran, PhD, is a Research Fellow and Research Investigator at the School of Information. 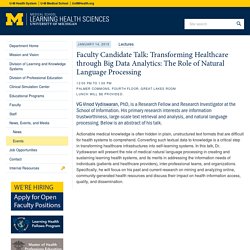 His primary research interests are information trustworthiness, large-scale text retrieval and analysis, and natural language processing. Below is an abstract of his talk. Actionable medical knowledge is often hidden in plain, unstructured text formats that are difficult for health systems to comprehend. Converting such textual data to knowledge is a critical step in transforming healthcare infrastructures into self-learning systems. The Kitchari Cleanse: An Ancient Detox Diet : Savvy Tokyo. Kitchari (kitch-ah-ree), a comfort food originating from India, is made with a lentils or “dal” (typically mung beans) combined with basmati rice, spices, various vegetables, lime and cilantro leaves. 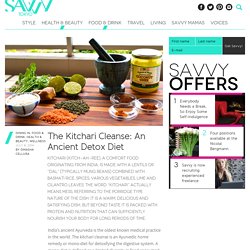 The word “kitchari” actually means mess, referring to the porridge type nature of the dish. It is a warm, delicious and satisfying dish, but beyond taste it is packed with protein and nutrition that can sufficiently nourish your body for long periods of time. India’s ancient Ayurveda is the oldest known medical practice in the world. The kitchari cleanse is an Ayurvedic home remedy or mono-diet for detoxifying the digestive system. A mono-diet is defined as a limited diversity in food consumed for a number of days. Day 1. School of Biological Sciences - Research - Division of Agricultural and Food and Nutritional Science. The Science of the Endocannabinoid System: How THC Affects the Brain and the Body.

After several decades of research, scientists studying the effects of marijuana made several important discoveries. 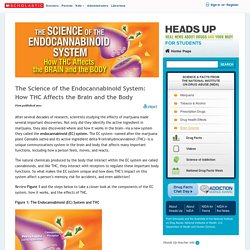 Not only did they identify the active ingredient in marijuana, they also discovered where and how it works in the brain—via a new system they called the endocannabinoid (EC) system. The EC system—named after the marijuana plant Cannabis sativa and its active ingredient delta-9-tetrahydrocannabinol (THC)—is a unique communications system in the brain and body that affects many important functions, including how a person feels, moves, and reacts. Can Tech Innovation Help End Cancer? Christopher Hansen, Pres., American Cancer Society Cancer Action Network By Christopher W. 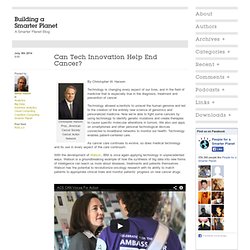 Hansen Technology is changing every aspect of our lives, and in the field of medicine that is especially true in the diagnosis, treatment and prevention of cancer. Technology allowed scientists to unravel the human genome and led to the creation of the entirely new science of genomics and personalized medicine. Now we’re able to fight some cancers by using technology to identify genetic mutations and create therapies to cause specific molecular alterations in tumors. As cancer care continues to evolve, so does medical technology and its use in every aspect of the care continuum. Graphics8.nytimes.com/packages/pdf/health/Topol. The Creative Destruction of Medicine by Eric Topol. The Future of Medicine. Eric Topol, MD, has written a book about the convergence of the digital revolution and medicine. 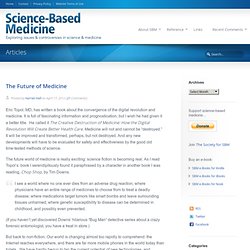 It is full of fascinating information and prognostication, but I wish he had given it a better title. He called it The Creative Destruction of Medicine: How the Digital Revolution Will Create Better Health Care. Medicine will not and cannot be “destroyed.” It will be improved and transformed, perhaps, but not destroyed. And any new developments will have to be evaluated for safety and effectiveness by the good old time-tested methods of science.

Subscribe to the Society. Why Fatty Almonds Are the Ultimate Healthy Snack. By Dr. 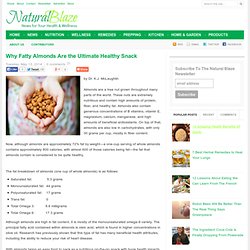 K.J. McLaughlin Almonds are a tree nut grown throughout many parts of the world. These nuts are extremely nutritious and contain high amounts of protein, fiber, and healthy fat. Almonds also contain generous concentrations of B vitamins, vitamin E, magnesium, calcium, manganese, and high amounts of beneficial antioxidants.

Now, although almonds are approximately 72% fat by weight—a one-cup serving of whole almonds contains approximately 800 calories, with almost 600 of those calories being fat—the fat that almonds contain is considered to be quite healthy. The fat breakdown of almonds (one cup of whole almonds) is as follows:Saturated fat: 5.3 gramsMonounsaturated fat: 44 gramsPolyunsaturated fat: 17 gramsTrans fat: 0Total Omega 3: 8.6 milligramsTotal Omega 6: 17.3 grams Although almonds are high in fat content, it is mostly of the monounsaturated omega-9 variety.

According to one presenter, snacking is “a hot topic given that snacking has become a way of life for most Americans.