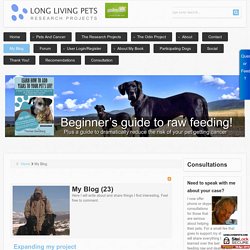 Over the next few months, I hope to add 1000 dogs that feed raw to my project. I will follow these dogs for the next 15 years plus. This should produce evidence beyond any doubt that raw feeding is superior to any other food.The most interesting result that will come from this is the rate of cancer incidents. The resource for cat, dog food manufacturers: PetfoodIndustry. How to Heal Leaky Gut Syndrome. 10408398.2011. Dr. Doug. Nutrition is the basis of health. 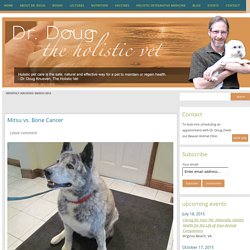 To build and run a healthy body, both wholesome raw materials and appropriate fuel are needed. We have been led to believe that processed pet foods provide healthy nutrition. I would like to inject an ounce of reality into this notion. Here are six falsehoods regarding the benefits of processed pet foods. 1. Processed pet foods are heated to the point that most of the natural nutrients in the raw materials are destroyed. Unfortunately, research indicates that synthetic vitamins do not provide the same health benefits as eating foods containing those same vitamins. Untitled. 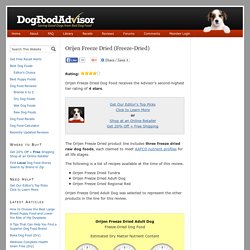 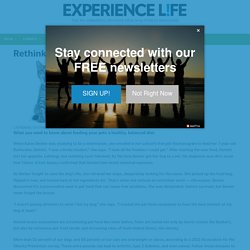 Untitled. No canine adult diet on the market has proven itself like Wysong Adult™ (formerly Maintenance™). 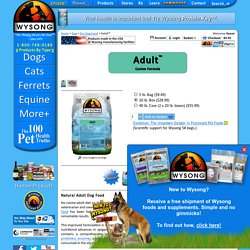 It is created by a veterinarian and owes its popularity solely to veterinary recommendation and word of mouth. Adult™ all natural dog food has been fed to tens of thousands of canines through multiple generations for over thirty years with remarkable results. This improved formulation is designed to take advantage of new processing methods to preserve natural value, and nutritional advances in epigenetics and nutrigenomics. Adult™ is higher in meats, organs, protein, and fat, and contains a comprehensive spectrum and higher levels of micronutrients/nutraceuticals including prebiotics, Genotoxicity of heat-processed foods. Volume 574, Issues 1–2, 1 July 2005, Pages 156–172 Genes and Environment — Bridging the Gap Edited By Joost H.M. van Delft and Jan van Benthem Review a Department of Food Science, Swedish University of Agricultural Sciences, P.O. 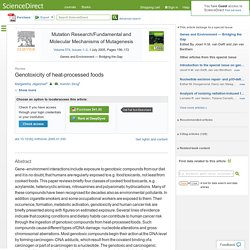 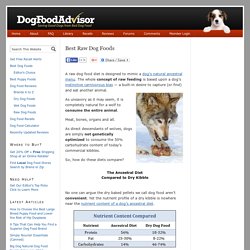 The whole concept of raw feeding is based upon a dog’s instinctive carnivorous bias — a built-in desire to capture (or find) and eat another animal. As unsavory as it may seem, it is completely natural for a wolf to consume the entire animal. Meat, bones, organs and all. As direct descendants of wolves, dogs are simply not genetically optimized to consume the 50% carbohydrate content of today’s commercial kibbles. So, how do these diets compare? The Ancestral Diet Compared to Dry Kibble. Untitled. Zero. 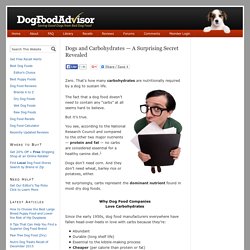 That’s how many carbohydrates are nutritionally required by a dog to sustain life. The fact that a dog food doesn’t need to contain any “carbs” at all seems hard to believe. But it’s true. You see, according to the National Research Council and compared to the other two major nutrients — protein and fat — no carbs are considered essential for a healthy canine diet.1 Dogs don’t need corn. Yet surprisingly, carbs represent the dominant nutrient found in most dry dog foods. The Dog Food Project - Myths about Dog Nutrition. Dogs should not be fed table scraps One of the most widespread myths the manufacturers of some (mostly poorer quality) products perpetuate. 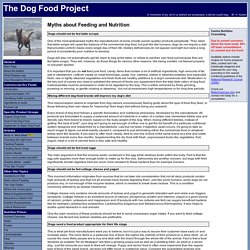 They claim that table scraps will upset the balance of the commercial dog food, but just like like humans, dogs do not require a diet that provides uniform meals every single day of their life. Dietary deficiencies do not appear overnight but need a long period of consistently poor nutrition to develop. Dogs will also not automatically get fat, learn to beg at the table, or refuse to eat their own food just because they are fed table scraps. They will, however, do those things for various other reasons, like being overfed, not trained properly or just plain spoiled. It is important that you do not feed junk food, candy, items that contain a lot of artificial ingredients, high amounts of fat, salt or sweeteners. Mixing different dog food brands will improve my dog's diet. PetFoodTest1. Investigation into the animal species contents of popular wet pet foods.

In January 2013, the European meat industry was cast into the spotlight when the Food Safety Authority of Ireland (FSAI) announced that horse DNA was discovered in beef burgers sold in British and Irish supermarkets. Subsequently, large scale discrepancies between declared and actual meat contents came to light [1]. The pet food industry in the European Union operates under legislative guidelines and is largely represented by the European Pet Food Industry Federation (FEDIAF), which issues its own Code of Good Labelling Practice (FEDIAF, 2011) [2]. Similar checks on pet food authenticity and traceability appear not to have been reported to date. To examine the correlation between composition of different animal proteins and the animal species that were disclosed on pet food labels, we determined the relative presence of DNA of cow, chicken, pig and horse in 17 leading dog and cat wet foods, which are readily available in UK supermarkets.

Functional foods and nutraceuticals for cats and dogs. The functional foods revolution, which has swept through human nutrition over the past decade, is now also happening in companion animal nutrition. This is not surprising, since it is estimated that between 50-60% of households in the US own at least one cat or dog (Olson and Moulton, 1993; Hoff et al., 1999) and a large portion of these pet owners will be health conscious individuals who not only are particular about their own diets but also those of their pets. Powerful market forces are fuelling the interest in functional foods; with rapid advances in scientific knowledge supporting the vital role of diet in health and disease prevention. Access 40 Highly Cited Articles from Nutrition and Cancer: An International Journal – 2.635 Impact Factor. Problem loading page.

Diets and nutrition for dogs and cats with cancer. Feeding for Cancer There is an enormous body of research dating back to the middle of last century which clearly demonstrates that cancer victims - human, feline, or canine, should be fed a low carbohydrate diet. This may and often is, taken to the extremes of a no carbohydrate or strict "Atkins type" ketogenic diet. The reason that ketogenic diets have the ability to combat cancer is because cancer cells, particularly those in the more advanced stages of malignancy, feed preferentially on glucose as a source of energy.

Malignant cancer cells have limited or no ability to burn fat for energy and they can only use protein for energy, once it has been processed by the liver, to form glucose. Avb_2013082020203.pdf. Acrylamide in foods, like kibble, pose bigger cancer risk: EFSA warns - Poisoned Pets. Worries about acrylamide posing a bigger cancer risk than previously thought led the European Food Safety Authority (EFSA) to issue an infographic cautioning consumers about common foods that may contain alarmingly high levels of acrylamide.

The infographic warns of the potential health effects of acrylamide and offers tips for consumers on how to limit their exposure to acrylamide. Acrylamide is a genotoxic carcinogen that forms mainly when starchy foods – like potatoes and grain-based foods such as kibble – are baked, fried or extruded at high temperatures. Vet-36-4-18-1105-29. Pdf. What's Really in Pet Food. Plump whole chickens, choice cuts of beef, fresh grains, and all the wholesome nutrition your dog or cat will ever need. These are the images pet food manufacturers promulgate through the media and advertising. This is what the $15 billion per year U.S. pet food industry wants consumers to believe they are buying when they purchase their products.

BARF. Nutrient Requirements of Dogs and Cats - Committee on Animal Nutrition, Subcommittee on Dog and Cat Nutrition, National Research Council, Board on Agriculture and Natural Resources, Division on Earth and Life Studies. Dietary Needs of Dogs and Cats: What You Should Know. Myths. ‎www.bagofbonesbarkery.com/useruploads/files/protein_-_do_high_protein_diets_destroy_kidneys.pdf. Dogs: The Accidental Omnivore. Choosing a dog food is difficult, because there are so many options available.

Pet stores teem with commercial dog diets, each claiming to be “the best dog food.” Carnivore vs. Herbivore vs. Omnivore « Pet Food Nutrition. Carnivore or omnivore? Articles for dog owners. Are dogs omnivores or carnivores? - Purina® Are dogs omnivores? What Would the Ideal Dog Food Look Like? ‎www.acana.com/wp-content/uploads/2013/01/Myths_of_High_Protein.pdf.