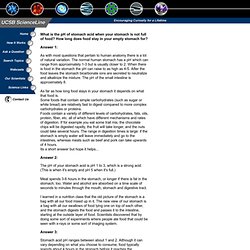 Trees That Feed Foundation. The Breadfruit Tree The first tree we have selected is the breadfruit. 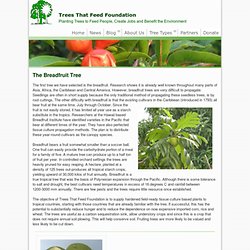 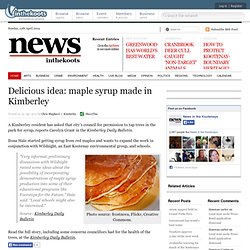 Apr, 2011 by Chris Shepherd in Kimberley | ShareThis A Kimberley resident has asked that city’s council for permission to tap trees in the park for syrup, reports Carolyn Grant in the Kimberley Daily Bulletin. Ilona Hale started getting syrup from red maples and wants to expand the work in conjunction with Wildsight, an East Kootenay environmental group, and schools. Photo source: frostnova, Flickr, Creative Commons.

Broccoli compound protects rats from lethal radiation. How To Counter Radiation With Your Food! By Jeani-Rose Atchison Contributing Writer for Wake Up World In a previous article for Wake Up World I talked about sunflower seeds and their ability to help remove radiation. 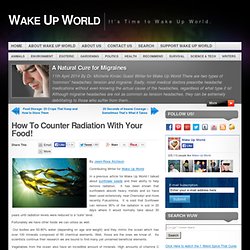 It has been shown that sunflowers absorb heavy metals and so have been used extensively near Chernobyl and more recently Fukushima. It is said that Sunflower can remove 95% of the radiation in soil in 20 days where it would normally take about 30 years until radiation levels were reduced to a “safe” level. JESUS: "LET NO FLESH MEAT ENTER YOUR MOUTHS" (Lect. 38, GHT) Biblical Vegetarianism / Vegetarianism in the Bible. Meat and cheese may be as bad for you as smoking. That chicken wing you're eating could be as deadly as a cigarette. 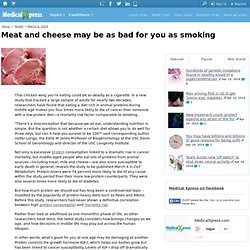 In a new study that tracked a large sample of adults for nearly two decades, researchers have found that eating a diet rich in animal proteins during middle age makes you four times more likely to die of cancer than someone with a low-protein diet—a mortality risk factor comparable to smoking. "There's a misconception that because we all eat, understanding nutrition is simple. But the question is not whether a certain diet allows you to do well for three days, but can it help you survive to be 100? " said corresponding author Valter Longo, the Edna M. Jones Professor of Biogerontology at the USC Davis School of Gerontology and director of the USC Longevity Institute.

Wheat Belly & Grain Brain - Ha! Klingon Worf from 'Star Trek' goes vegan. The 6 Most Horrifying Lies The Food Industry is Feeding You. 49 Good Reasons For Being A Vegetarian. Healthy & Compassionate lifestyle, Vegie Diet, Vegetarian Recipes, Vegetarian Restaurants, Vegan Information. Vegan Bingo. Factory Farming's Days May Be Numbered. One Green Planet. When doctors can't find anything wrong with you. 10 common objections to going vegan. 'Human meat' alert at pig farm. Officials in western Canada have warned that meat from a pig farm owned by an accused serial killer may have been contaminated with human remains. 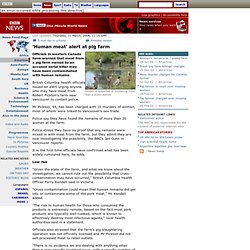 British Columbia health officials issued an alert urging anyone who may have meat from Robert Pickton's farm near Vancouver to contact police. Mr Pickton, 54, has been charged with 15 murders of women, most of whom were linked to Vancouver's sex trade. Police say they have found the remains of more than 20 women at the farm. Is Umami a Secret Ingredient of Vegan Activism? In a recent New York Times article, wellness reporter Tara Parker-Pope explored the challenges of going vegan. 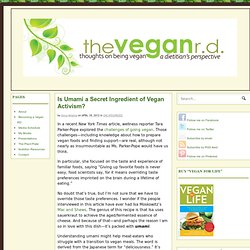 Those challenges—including knowledge about how to prepare vegan foods and finding support—are real, although not nearly as insurmountable as Ms. Parker-Pope would have us think. In particular, she focused on the taste and experience of familiar foods, saying “Giving up favorite foods is never easy, food scientists say, for it means overriding taste preferences imprinted on the brain during a lifetime of eating.” The Rise of the Power Vegans. It used to be easy for moguls to flaunt their power. 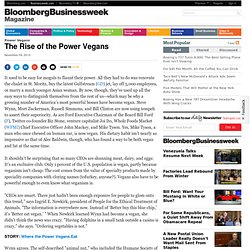 All they had to do was renovate the chalet in St. Moritz, buy the latest Gulfstream (GD) jet, lay off 5,000 employees, or marry a much younger Asian woman. Me, Give Up Meat? Vegan Diets Surging in Popularity. Get the Best Hospitals 2013 guidebook. 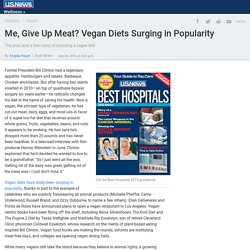 Former President Bill Clinton had a legendary appetite: Hamburgers and steaks. Barbeque. Chicken enchiladas. But after having two stents inserted in 2010—on top of quadruple bypass surgery six years earlier—he radically changed his diet in the name of saving his health. Now a vegan, the strictest type of vegetarian, he has cut out meat, dairy, eggs, and most oils in favor of a super-low-fat diet that revolves around whole grains, fruits, vegetables, beans, and nuts. 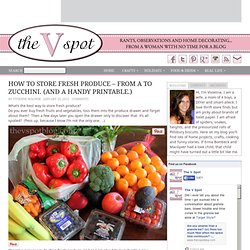 Do you ever buy fresh fruits and vegetables, toss them into the produce drawer and forget about them? How to Store Vegetables & Fruit Without Plastic.