The Importance of Nutrition 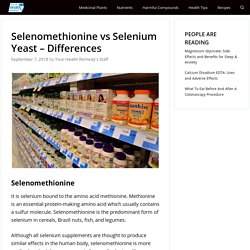 Methionine is an essential protein-making amino acid which usually contains a sulfur molecule. Selenomethionine is the predominant form of selenium in cereals, Brazil nuts, fish, and legumes. Although all selenium supplements are thought to produce similar effects in the human body, selenomethionine is more easily absorbed than non-organic forms of selenium like selenate. Health Benefits Cancer Organic selenium compounds act on multiple pathways to attack cancer on a variety of different fronts, at many different stages, according to a study done at the University of Illinois at Chicago. 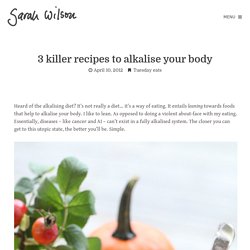 It’s not really a diet… it’s a way of eating. It entails leaning towards foods that help to alkalise your body. I like to lean. As opposed to doing a violent about-face with my eating. Essentially, diseases – like cancer and AI – can’t exist in a fully alkalised system. I’ve done this before, when I was 21. This post has been updated: Where does this sit with my eating today? I thought I’d get The Alkaline Sisters to share a bit of a 101 and some recipes. Why should we be alkalising our bodies? How Nutrition Can Shape Gut Microbiota - Alessio Fasano (March 2016) GcMAF Activation. Magnesium deficiency linked to increased risk of pancreatic cancer. (NaturalHealth365) Every day, 145 Americans receive the devastating news that they have pancreatic cancer. 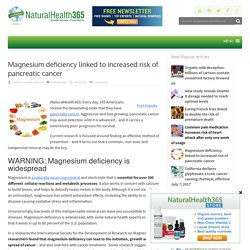 Aggressive and fast-growing, pancreatic cancer may avoid detection until it is advanced – and it carries a notoriously poor prognosis for survival. Current research is focused around finding an effective method of prevention – and it turns out that a common, non-toxic and inexpensive mineral may be the key. WARNING: Magnesium deficiency is widespread Magnesium is a naturally-occurring mineral and electrolyte that is essential for over 300 different cellular reactions and metabolic processes.

It also works in concert with calcium to build bones, and helps to detoxify heavy metals in the body. Unsurprisingly, low levels of this indispensable mineral can leave you susceptible to serious illnesses. Sulforaphane stops cancer and promotes detoxification. (NaturalHealth365) According to Breastcancer.org, an estimated 255,180 new cases of breast cancer are expected to be diagnosed in the United States in 2017 alone. 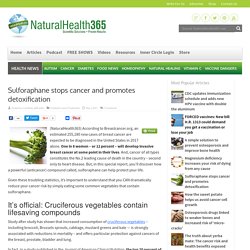 One in 8 women – or 12 percent – will develop invasive breast cancer at some point in their lives. And, cancer of all types constitutes the No.2 leading cause of death in the country – second only to heart disease. Micronutrient Synergy: The Most Effective Approach to Health! Important Health Information for All Selecting the most effective supplementation is not an easy task. 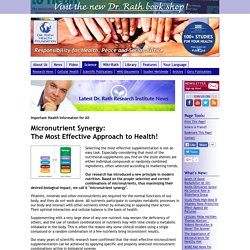 Especially considering that most of the nutritional supplements you find on the store shelves are either individual compounds or randomly combined ingredients, often selected according to marketing trends. Our research has introduced a new principle in modern nutrition. Based on the proper selection and correct combinations of micronutrients, thus maximizing their desired biological impact, we call it "micronutrient synergy". Vitamins, minerals and other micronutrients are required for the normal functions of our body, and they do not work alone.

LEARN FROM A JEDI — Dr. Glidden ND HealthCare. A Ketogenic Diet May Be the Key to Cancer Recovery. By Dr. 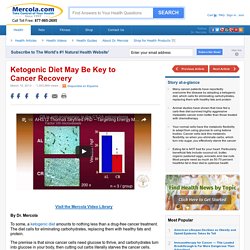 Mercola To some, a ketogenic diet amounts to nothing less than a drug-free cancer treatment. The diet calls for eliminating carbohydrates, replacing them with healthy fats and protein. The premise is that since cancer cells need glucose to thrive, and carbohydrates turn into glucose in your body, then cutting out carbs literally starves the cancer cells. Ann Cameron cured her stage 4 cancer with carrot juice, nothing else. - Chris Beat Cancer. My name is Ann Cameron. 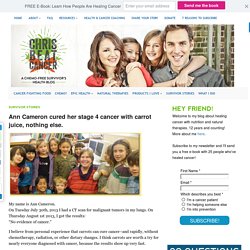 On Tuesday July 30th, 2013 I had a CT scan for malignant tumors in my lungs. Boost the immune system with one hour of singing. (NaturalHealth365) While never short of anecdotal evidence, scientists now say they have uncovered biological proof that the simple act of singing can give the immune system a much-needed boost. 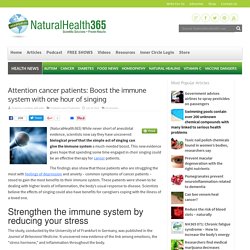 This new evidence gives hope that spending some time engaged in choir singing could be an effective therapy for cancer patients. The findings also show that those patients who are struggling the most with feelings of depression and anxiety – common symptoms of cancer patients – stood to gain the most benefits to their immune system. These patients were shown to be dealing with higher levels of inflammation, the body’s usual response to disease. Scientists believe the effects of singing could also have benefits for caregivers coping with the illness of a loved one. The study, conducted by the University of of Frankfurt in Germany, was published in the Journal of Behavioral Medicine. Researchers have also been able to show that singing promotes increases in quantities of cytokines. References: Lemons and Cancer: Are Lemons a Cancer Cure? Edible Mushrooms: Nature's Most Researched Anti-Cancer Agent. 5th August 2016 By Sayer Ji Contributing writer for Wake Up World. 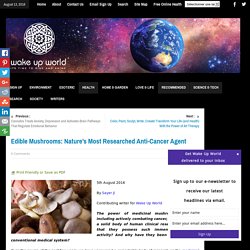 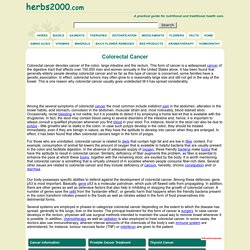 This form of cancer is a widespread cancer of the digestive tract that affects over 150,000 men and women annually in the United States alone. It has been found that generally elderly people develop colorectal cancer and as far as this type of cancer is concerned, some families have a genetic association. In effect, colorectal tumors may often grow to a reasonably large size and still not get in the way of the bowel. Dr. Robert Morse ND - "Cancer - The Raw Truth" How I Got Healthy and Free Of Cancer – WITHOUT Big Pharma! 16th August 2015 By Dr. Susan Walker Guest Writer for Wake Up World Dr. Susan Walker reveals how she naturally healed herself from stage-4 lung cancer, without conventional medical or pharmaceutical interventions.

When I was working on my doctorate between 2000-2008 in North Carolina, my plate was full. Soon after working on my doctorate my Aunt Gladys got sick from a dangerous bacterial infection she contracted after an abdominal operation. I would drive down there to help Aunt Fran out between my school exams and work. Several weeks later, around Christmas, I got a phone call to come down immediately — a sad visit, as my Aunt Gladys died, and my Aunt Fran was diagnosed with stage 4 lung cancer.

20 of the Most Outstanding Foods to Beat This One Deadly Cancer. Cabbage Beats Chemo For Cervical Cancer. Kill cancer cells with watercress. (NaturalHealth365) A wealth of scientific evidence plus no shortage of real-life observation, make it difficult to dispute the critical role that nutrition plays in overall health, and more specifically, the human body’s ability to avoid cancer.

In fact, it’s estimated that 30 to 40 percent of all cancers are directly linked to poor diet, according to a report by the World Cancer Research Fund UK. For example, cruciferous vegetables, such as broccoli, cauliflower and cabbage, are prized for their anticancer properties. While vegetables like broccoli, cauliflower and cabbage are commonly used, it is the lesser-known watercress that exhibits some of the most beneficial qualities for preventing and slowing the growth of cancer.

Reverse cancer naturally. Find out how to safely and effectively remove unwanted toxins from the body; improve digestion and boost immune function without toxic drugs or risky surgical procedures. In addition, watercress is packed with zeaxanthin and lutein. Confirmed: Flaxseed Contains 'Estrogens' That Regress Cancer. Flaxseed has remarkable therapeutic properties, with over 50 potential applications in the prevention and treatment of disease, as documented in the peer-reviewed biomedical literature itself* Flaxseed's role in breast cancer is one of the more compelling areas of research, considering this is the #1 form of cancer afflicting women today, and that most women still equate "prevention" with subjecting themselves to annual breast screenings involving highly carcinogenic 30 kVp gamma rays -- overlooking entirely the role of diet, as well as avoidable chemical exposures. Given that flaxseed already has an exceptional nutritional profile, there are a broad range of reasons to incorporate it into the diet, even if only as a nourishing food.

Foods That Fuel The Growth Of Cancer Cells…And Foods That Starve Them : Budwig Center. Are you aware that there are certain foods that actually increase your risk of cancer, while others have the power to starve cancer cells from your body? Most doctors do not study nutrition and therefore rarely give you any dietary advice, but instead simply write you out a drug prescription for your health concerns. Foods That Fuel the Growth of Cancer Cells Here are some of the most dangerous foods that can actually fuel the growth of cancer cells: 1. Cured, smoked and processed meats all have direct links to cancer. 2. 3. 4. Consuming only grass fed free range beef, chicken and lamb is highly recommended to avoid all the hormones and chemicals used in commercial farms today. Cyanidin. Cyanidin is a natural organic compound. It is a particular type of anthocyanidin (glycoside version called anthocyanins). It is a pigment found in many red berries including but not limited to grapes, bilberry, blackberry, blueberry, cherry, cranberry, elderberry, hawthorn, loganberry, acai berry and raspberry.[1] It can also be found in other fruits such as apples and plums, and in red cabbage and red onion.

It has a characteristic reddish-purple color, though this can change with pH; solutions of the compound are red at pH < 3, violet at pH 7-8, and blue at pH > 11. Mulberry anthocyanins, cyanidin 3-rutinoside and cyanidin 3-glucoside, exhibited an inhibitory effect on the migration and invasion of a human lung... Curing chronic disease without drugs.