Lowered methionine ingestion as responsible for the decrease in rodent mitochondrial oxidative stress in protein and dietary restriction possible i... Why I’m Not Dismissing the Latest “Animal Protein is Bad” Study (But Not Losing Sleep Over It, Either) I keep doing this thing where I stand in the shower writing blog posts in my head, emerging from the suds giddy and prune-fingered, feeling strangely accomplished about the words I have not yet typed. 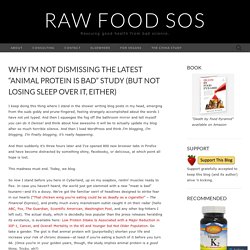 And then I squeegee the fog off the bathroom mirror and tell myself you can do it Denise! Naturally and Holistically Curing Allergies By Eliminating Candida. A typical allergy-prone individual has to take a pill every twelve hours endlessly if he trusts orthodox medicine to treat him, and this merely suppresses the symptoms temporarily. 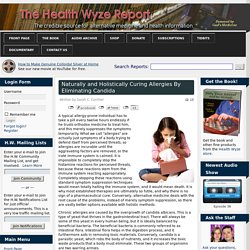 What we call "allergies" are actually just symptoms of a body trying to defend itself from perceived threats, so allergies are incurable until the aggravating factors are removed, or the irate immune system is calmed. It is impossible to completely stop the histamine reactions for perceived threats, because these reactions stem from the immune system reacting appropriately. Completely stopping these reactions using standard symptom suppression techniques would mean totally halting the immune system, and it would mean death. It is why most established therapies are ultimately so futile, and why there is no sign of a pharmaceutical cure.

Chronic allergies are caused by the overgrowth of candida albicans. Whenever an overgrowth of yeast overwhelms the flora, it causes various health issues. How Fermenting Takes the "Allergy" Out of Soy and Other Foods. Beer and wine do have antioxidants, but find out why the wild fermentation process used to make them is NOT so great for your health. 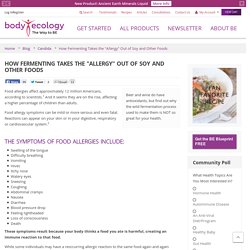 Food allergies affect approximately 12 million Americans, according to scientists.1 And it seems they are on the rise, affecting a higher percentage of children than adults. SDSU research examines fermented soy in fish diets. Tuesday, August 09, 2011 Making rainbow trout into vegetarians isn’t in the plans, but a South Dakota State University fisheries science researcher is hoping to get his fish to eat more soy. 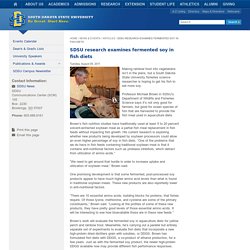 Professor Michael Brown in SDSU’s Department of Wildlife and Fisheries Science says it’s not only good for farmers, but good for ocean species of fish that are harvested to provide the fish meal used in aquaculture diets. Brown’s fish nutrition studies have traditionally used at least 5 to 20 percent solvent-extracted soybean meal as a partial fish meal replacement in fish feeds without impacting fish growth. 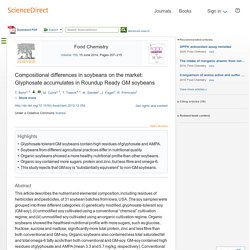 Globally, glyphosate-tolerant GM soy is the number one GM crop plant. In 2011–2012, soybeans were planted on about 30 million hectares in the USA, with Roundup Ready GM soy contributing 93–94% of the production. The Whole Soy Story. In ancient times in China, soy was valued as a superb green manure for the nitrogen-fixing ability of its roots. 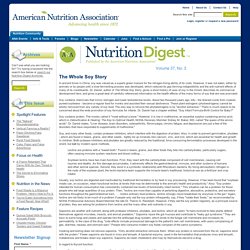 However, it was not eaten, either by animals or by people until a slow fermenting process was developed, which reduced its gas-forming indigestibility and the anti-nutrient effects of many of its constituents. Dr. Daniel, author of The Whole Soy Story, gives a short history of uses of soy in the Orient, describes its commercial development here, and gives a great deal of carefully referenced information on the health effects of the many forms of soy that are now promoted. Soy contains chemicals that mimic estrogen and lower testosterone levels. About two thousand years ago, tofu - the drained curds from cooked, pureed soybeans - became a regular food for monks and assisted their sexual abstinence. 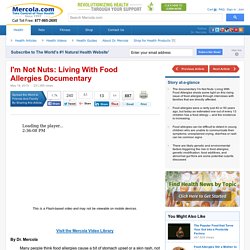 Mercola Many people think food allergies cause a bit of stomach upset or a skin rash, not realizing that for a growing number of the population, food allergies can be deadly. I'm Not Nuts: Living With Food Allergies is a documentary that sheds some light on this rising issue through interviews with families that are directly affected.While it's widely accepted that a bee sting can cause anaphylaxis, a type of severe allergic reaction that can be deadly, stings cause about 40 US deaths a year compared to 100 deaths from food. In fact, food is the most common trigger for anaphylaxis.1. Weird Myths and the Real Truth About Nutritional Yeast - Kimberly Snyder. Today’s blog is about a question I saw pop up recently on our Beauty Detox Foods Facebook page— and that question is whether nutritional yeast is really good for you — or not! 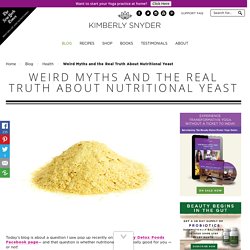 As someone who has consumed nutritional yeast for years without any problems (and many apparent health benefits!) , I want to address many of the myths and misinformation floating around about this superfood. So I’m going to address them all to the best of my ability, along with providing some research and nutritional science, right here in this post. The first half of the post will explain what nutritional yeast is, how it’s made, and why may be helpful — and then the second half will address some of the criticisms against nutritional yeast, and why I think they’re largely unfounded.