Nutrition for pregnancy, breastfeeding and children 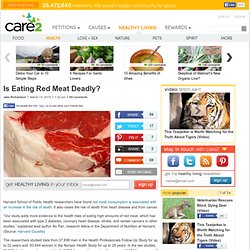 It also raises the risk of death from heart disease and from cancer. “Our study adds more evidence to the health risks of eating high amounts of red meat, which has been associated with type 2 diabetes, coronary heart disease, stroke, and certain cancers in other studies,” explained lead author An Pan, research fellow in the Department of Nutrition at Harvard. (Source: Harvard Gazette) The researchers studied data from 37,698 men in the Health Professionals Follow-Up Study for up to 22 years and 83,644 women in the Nurses’ Health Study for up to 28 years. In the two studies, 23,926 deaths were documented with 5,910 from cardiovascular disease and 9,464 from cancer. Replacing red meat with other protein sources lowered the risk of mortality. “Eating a serving of nuts instead of beef or pork was associated with a 19% lower risk of dying during the study. Animal Protein. When Nitrites Go Bad. Nitrites in processed meat form nitrosamines, a class of potent carcinogens found in cigarette smoke, which may explain why hot dog consumption has been associated with the two leading pediatric cancers, brain tumors and childhood leukemia. 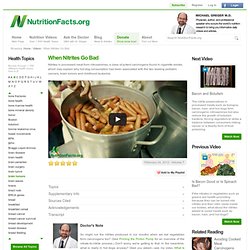 Topics Supplementary Info. Has an aquatic diet been necessary for hominin bra... [Br J Nutr. 2006. Preventing Childhood Allergies. What is responsible for the rising prevalence of atopic diseases such as food allergies, asthma, hay fever, and eczema? 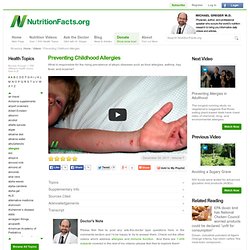 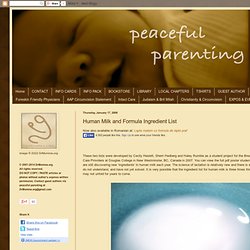 You can view the full pdf poster students created here. Note that we are still discovering new 'ingredients' in human milk each year. The science of lactation is relatively new and there is still a significant amount that we do not understand, and have not yet solved. Baby food revolution: New rules for feeding your baby. By Evonne Lack Sometime between 4 and 6 months of age, your baby's all-liquid diet becomes more outdated than a maternity tent dress. 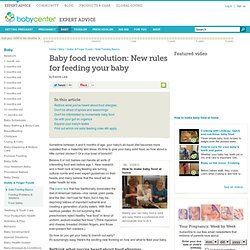 It's time to give your baby solid food, so how about a little curried chicken? Or a nice bowl of borscht? How to make baby food at home. Aspartame's threat to the unborn. Aspartame's threat to the unborn New studies show that aspartame may increase the risk of premature births. Research funded by the European Union found a correlation between the amount of diet drink consumed and an early birth among the 60,000 women studied, reported on July 10. The study also says that drinks containing aspartame and other artificial sweeteners may pose a danger to the unborn child. Some British public health experts are now advising expectant mothers to avoid food and drink containing the chemicals, the report added. The EU study suggests the risk of giving birth before 37 weeks of a normal pregnancy is increased by 38 percent if the woman was drinking, on average, one can of a diet drink a day.

Four or more cans a day can increase the risk by as much as 78 per cent. Is Nutrasweet® Bad For You? Concerns raised about the use of aspartame by pregnant women. 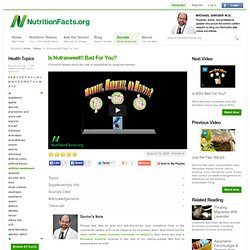 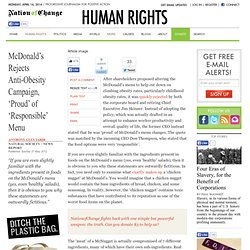 Instead of adopting the policy, which was actually drafted in an attempt to enhance worker productivity and overall quality of life, the former CEO instead stated that he was ‘proud’ of McDonald’s menu changes. The quote was matched by the incoming CEO Don Thompson, who stated that the food options were very ‘responsible’. If you are even slightly familiar with the ingredients present in foods on the McDonald’s menu (yes, even ‘healthy’ salads), then it is obvious to you why these statements are outwardly fictitious. In fact, you need only to examine what exactly makes up a ‘chicken nugget’ at McDonald’s. You would imagine that a chicken nugget would contain the base ingredients of bread, chicken, and some seasoning. 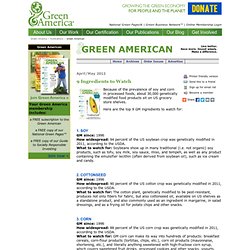 Here are the top 9 GM ingredients to watch for: 1. SOY GM since: 1996 How widespread: 94 percent of the US soybean crop was genetically modified in 2011, according to the USDA.