FQ2: Is the veil an Islamic requirement?

Al-Ahzab [33:59] A Brief History of the Veil in Islam. To this day, head coverings play a significant role in many religions, including Orthodox Judaism and Catholicism. 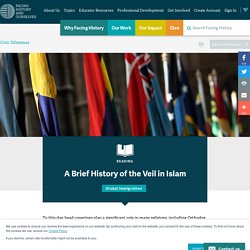 Islam began as a small faith community in the Arabian Peninsula. The community was established in Medina by the prophet Mohammed (c. 570–632 CE). From there it spread through the Middle East to Saharan and sub-Saharan Africa, to Central Asia, and to many societies around the Arabian Sea. After Islam was established in the Middle East and North Africa, it made significant inroads into Europe, as well. Scarves and veils of different colors and shapes were customary in countless cultures long before Islam came into being in the seventh century in the Arabian Peninsula (which includes present-day Saudi Arabia).

Since the seventh century, Islam has grown to be one of the major world religions. Understanding the Muslim Dress Code: Modesty for Men and the Hijāb for Women (Islam 4.5 & 4.6) – Abu Khadeejah : أبو خديجة. Objectives: Explain and illustrate what is meant by hijab and the importance of this to Muslims. 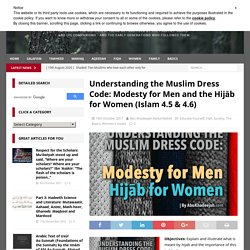 Terms: Modesty: A humble, unpretentious manner or appearance. Hijāb: A term often used to mean scarf or outer garment that Muslim women wear, but in Arabic it means a ‘cover’ or ‘screen’. Khimār: A scarf that covers the head, shoulders and chest of a woman. Jilbāb: A large outer garment, one piece or two pieces, that covers the entire body except the face and hands. Niqāb: A face veil. (Purdah: An Urdu language term used by Western media to mean covering every part of the woman’s body.) Allāh stated: “O children of Adam, We have bestowed upon you clothing to conceal what should be concealed, and as a fine adornment — and the garment of righteousness, that is best.” A Code of Practice For Muslims in the West. Introduction Wearing clothes made of natural leather is a real problem for Muslims living in non-Muslim countries. 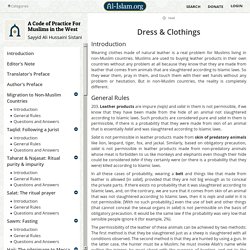 Muslims are used to buying leather products in their own countries without any problem at all because they know that they are made from leather that comes from animals that are slaughtered according to Islamic laws. So they wear them, pray in them, and touch them with their wet hands without any problem or hesitation. But in non-Muslim countries, the reality is completely different. General Rules 203. Salat is not permissible in leather products made from skin of predatory animals like lion, leopard, tiger, fox, and jackal. In all these cases of probability, wearing a belt and things like that made from leather is allowed [in salat], provided that they are not big enough as to conceal the private parts. 204. 205. 206. 207. 208. 209. 210. 211. 212. 213. 214. 215. 216.

Questions and Answers 217. Yassmin Abdel-Magied: What does my headscarf mean to you? What does the Quran really say about a Muslim woman's hijab? Women in the Quran. While the Quran does not name any woman except for Mary directly, women play a role in many of its stories. 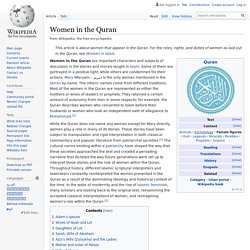 These stories have been subject to manipulation and rigid interpretation in both classical commentary and popular literature from patriarchal societies.[2] The cultural norms existing within a patriarchy have shaped the way that these societies approached the text and created a pervading narrative that dictated the way future generations were set up to interpret these stories and the role of women within the Quran. Throughout history, different Islamic scriptural interpreters and lawmakers constantly reinterpreted the women presented in the Quran as a result of the dominating ideology and historical context of the time. In the wake of modernity and the rise of Islamic feminism, many scholars are looking back to the original text, reexamining the accepted classical interpretations of women, and reimagining women's role within the Quran.[2] Adam's spouse[edit] "So We said: O Adam!

Does the Quran Require Women to Wear the Veil? One of the most visibly contentious issues in Islam as well as in the Western world is women's wearing of the veil. 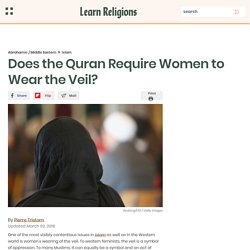 To western feminists, the veil is a symbol of oppression. To many Muslims, it can equally be a symbol and an act of empowerment, both for its explicit rejection of Western values and its implicit meaning as a status symbol: many Muslims see the veil as a sign of distinction, the more so because it evokes a connection to the Prophet Muhammad and his wives. But does the Quran, in fact, require women to cover themselves—with a veil, a chador, or any other form of head covering? The quick answer is no: the Quran has no requirement that women cover their faces with a veil, or cover their bodies with the full-body burqua or chador, as in Iran and Afghanistan. But the Quran does address the matter of veiling in such a way that it has been interpreted historically, if not necessarily correctly, by Muslim clerics as applying to women.