All Strangers Till We Meet

Mister Rogers's Simple Set of Rules for Talking to Kids. Rogers brought this level of care and attention not just to granular details and phrasings, but the bigger messages his show would send. Hedda Sharapan, one of the staff members at Fred Rogers’s production company, Family Communications, Inc., recalls Rogers once halted taping of a show when a cast member told the puppet Henrietta Pussycat not to cry; he interrupted shooting to make it clear that his show would never suggest to children that they not cry. In working on the show, Rogers interacted extensively with academic researchers. Daniel R. Anderson, a psychologist formerly at the University of Massachusetts who worked as an advisor for the show, remembered a speaking trip to Germany at which some members of an academic audience raised questions about Rogers’s direct approach on television.

Children From Around The World Showcase Their Favorite Toys In This Heartwarming Series (22 Pics) They say a picture is worth a thousand words but what about tens of pictures? 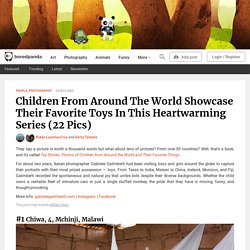 From over 50 countries? (3) Facebook. Does Who You Are at 7 Determine Who You Are at 63? She Quit Her Job. He Got Night Goggles. They Searched 57 Days for Their Dog. After a late night at a stock-car race, Carole and Verne King returned to their dog-friendly hotel in Kalispell, Mont., and made a devastating discovery. 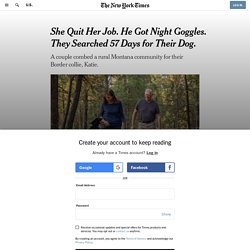 Their 7-year-old Border collie, Katie, was no longer in the room. She had apparently managed to unlatch the door, possibly spooked by a thunderstorm that had swept through the area. At the front desk, an attendant said she had seen an anxious dog bolt out the front door hours before. The Kings were stunned. In the small city of 23,000 people that backs up to the sprawling wilderness near Glacier National Park, surrounded by forests and fields, where would they even start looking? Over the next 57 days, the couple set out on a desperate search that included night-vision goggles, animal-tracking cameras and horse manure brought in from the family’s farm in Eastern Washington. Bikers line up at girl's lemonade stand after mom helps save them during crash.

A group of 30 bikers visited one little girl's lemonade stand as a long-awaited thank you to her mom. 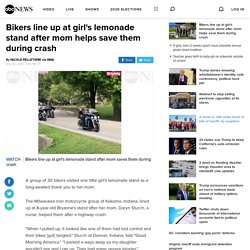 The Milwaukee Iron motorcycle group of Kokomo, Indiana, lined up at 8-year-old Bryanne's stand after her mom, Daryn Sturch, a nurse, helped them after a highway crash. "When I pulled up, it looked like one of them had lost control and their bikes [got] tangled," Sturch of Denver, Indiana, told "Good Morning America. " "I parked a ways away so my daughter wouldn't see and I ran up. They had some severe injuries. " The accident, which injured five bikers, took place on Indiana's on State Road 19 in September 2018, according to ABC affiliate WRTV.

Sturch said she comforted the victims -- three men and two women -- until paramedics arrived. Rick Astley with Choir! Choir! Choir! - Never Gonna Give You Up!!! (1) IF THE WORLD WERE 100 PEOPLE UPDATED. Meet me on the bridge: Discovering the truth about my parents after 20 years (FULL FILM) BBC Stories. 5 Brits Take A DNA Test. Dog demands passers-by to play with him. Behind the scene of cosplay photography : gifs.

Hello my brother from another mother! The older man was paused at the top of an escalator afraid to hop on. This young man offered the simplest kindness: an out-reached arm and a "can I help you on, sir?" Orangutan and human mom bond over baby. American Muslims Thrive in the Age of Trump Rhetoric and Hate Crimes.

This story appears in the May 2018 issue of National Geographic magazine.

This story is part of Diversity in America, a National Geographic series covering racial, ethnic, and religious groups and examining their changing roles in 21st-century life. Tell us your story with #IDefineMe. 'Europe Does Not See Us As Human': Stranded Refugees Struggle In Greece : Parallels. Gapminder: statistics for a fact based world view. Which Country Reads the Most? On this episode, map nerd John Green shares a few things you might not know about maps. 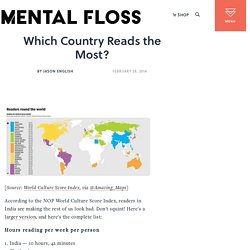 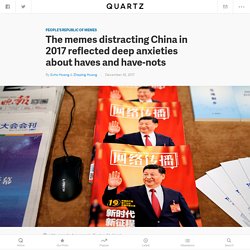 Once, his ancestors had owned the coal-seamed cavern that he was now descending into, his trainee miner hard-hat secure. His people had settled the Clintwood and George’s Fork area, along the Appalachian edge of southern Virginia, in the early 17th century. Around the turn of the 1900s, smooth-talking land agents from back east swept through the area, coaxing mountain people into selling the rights to the ground beneath them for cheap. One of Mullins’ ancestors received 12 rifles and 13 hogs—one apiece for each of his children, plus a hog for himself—in exchange for the rights to land that has since produced billions of dollars worth of coal.