Bro. this guy, the buddha? Yeah he sounds like a jesus copy cat. nyah!

The 10 Figures in Buddhist Art You Need to Know – Artisera. Since ancient times, subjects from Buddhism have been widely and beautifully represented in art through paintings and sculptures. 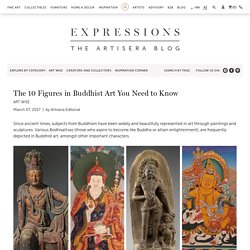 Various Bodhisattvas (those who aspire to become like Buddha or attain enlightenment), are frequently depicted in Buddhist art, amongst other important characters. The portrayal of Buddhist figures in art is deeply nuanced and layered, with different postures and colours signifying specific meaning. Here are 10 figures depicted most commonly in Buddhist art. 1. Guan Yin An important bodhisattva worshipped in East Asia, Guan Yin is known for her unbound wisdom, compassion and mercy, and depicted in several different forms. Left: Guan Yin in white robes seated on a lotus; Right: Wood sculpture of the 'thousand arms-thousand eyes' Guan Yin from the Song Dynasty Guan Yin is also portrayed in the Royal Ease pose, with her right knee raised and the right arm sitting on it. Guan Yin polychrome figure at Nelson-Atkins Museum of Art. Ten misconceptions about Buddhism. Robert E.

Buswell Jr. and Donald S. Lopez Jr. | November 19, 2013 Robert E. Buswell Jr. (left) holds the Irving and Jean Stone Endowed Chair in Humanities at the College of Letters and Science at UCLA. 1. Meditation is often identified as the central practice of Buddhism. 2. In fact, there are hundreds of forms of Buddhist meditation, some for developing deep states of concentration and mental bliss, some for analyzing the constituents of mind and body to find that there is no self, some for meeting the Buddha face to face. 3. Bhikṣu, the Sanskrit term translated as "monk," literally means "beggar. " 4. It is often said that a war has never been fought in the name of Buddhism. Buddhism Information. As of 2010, there were about 488 million Buddhists around the world, representing 7% of the world's total population. 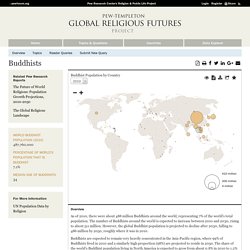 The three major branches of Buddhism in the modern world are Mahayana Buddhism, Theravada Buddhism and Vajrayana (sometimes described as Tibetan) Buddhism. Demographics of Buddhism. The Philosophy of The Buddha. Sacred Texts Indi. The Buddhist Society: Scriptures & Texts. Oral Tradition The Buddha's teaching was oral. 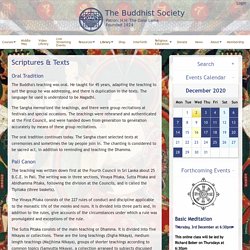 He taught for 45 years, adapting the teaching to suit the group he was addressing, and there is duplication in the texts. The language he used is understood to be Magadhi. The Sangha memorized the teachings, and there were group recitations at festivals and special occasions. The teachings were rehearsed and authenticated at the First Council, and were handed down from generation to generation accurately by means of these group recitations.

The oral tradition continues today. Pali Canon. Heilbrunn Timeline of Art History. According to tradition, the historical Buddha lived from 563 to 483 B.C., although scholars postulate that he may have lived as much as a century later. 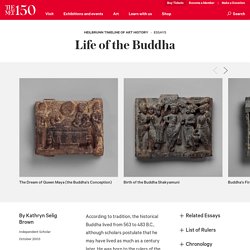 He was born to the rulers of the Shakya clan, hence his appellation Shakyamuni, which means “sage of the Shakya clan.” The legends that grew up around him hold that both his conception and birth were miraculous. His mother, Maya, conceived him when she dreamed that a white elephant entered her right side (1976.402). She gave birth to him in a standing position while grasping a tree in a garden (1987.417.1). The child emerged from Maya’s right side fully formed and proceeded to take seven steps. The ravages of poverty, disease, and even old age were therefore unknown to Siddhartha, who grew up surrounded by every comfort in a sumptuous palace.

The Buddha continued to sit after his enlightenment, meditating beneath the tree and then standing beside it for a number of weeks. Brown, Kathryn Selig.