Buddhism and Atheism. By Alfred Bloom, Emeritus Professor, University of Hawaii It has been very common in modern western circles to describe Buddhism as atheistic. 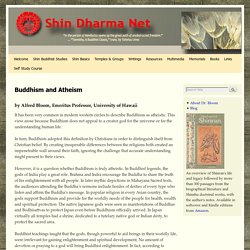 This view arose because Buddhism does not appeal to a creator god for the universe or for the understanding human life. In turn, Buddhists adopted this definition by Christians in order to distinguish itself from Christian belief. By creating insuperable differences between the religions both created an impenetrable wall around their faith, ignoring the challenge that accurate understanding might present to their views. However, it is a question whether Buddhism is truly atheistic.

Buddhist teachings taught that the gods, though powerful to aid beings in their worldly life, were irrelevant for gaining enlightenment and spiritual development. The gods like every other being must strive to achieve enlightenment. Dalai Lama's guide to happiness. How Buddhism Benefits Mental Health. The Philosophy of The Buddha. Ten misconceptions about Buddhism.

Buswell Jr. and Donald S. Lopez Jr. | November 19, 2013 Robert E. Buswell Jr. (left) holds the Irving and Jean Stone Endowed Chair in Humanities at the College of Letters and Science at UCLA. 1. Meditation is often identified as the central practice of Buddhism. 2. In fact, there are hundreds of forms of Buddhist meditation, some for developing deep states of concentration and mental bliss, some for analyzing the constituents of mind and body to find that there is no self, some for meeting the Buddha face to face. 3.

Bhikṣu, the Sanskrit term translated as "monk," literally means "beggar. " 4. It is often said that a war has never been fought in the name of Buddhism. 5. Buddhism has many philosophical schools, with a sophistication equal to that of any philosophical school that developed in Europe. What does Buddhism say about prejudice and discrimination? - Prejudice and discrimination - GCSE Religious Studies Revision - BBC Bitesize. Buddhism in the World Today — Study Buddhism. India. 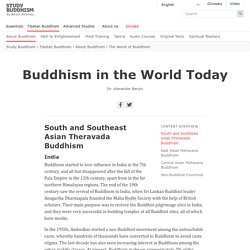 Pursuing an American Buddhism. Charles Prebish has probably visited more American dharma centers than anyone else on the continent. 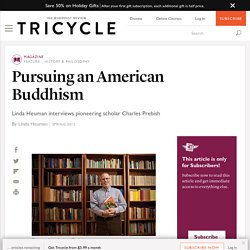 For those familiar with his work, this should be no surprise, as Prebish pioneered the scholarly study of American Buddhism as a subdiscipline of Buddhist studies. In the late sixties and early seventies, when Prebish was beginning his career, the academic study of Buddhism meant largely its study as an artifact of “Oriental” culture. As a young scholar Prebish focused on early Indian Buddhism: the development of the monastic system and the disciplinary literature known as Vinaya, topics well within the range of traditional Buddhist studies scholarship. But by the seventies, Prebish was among the first academics to observe that the burgeoning importation of Buddhism to the United States was developing its own cultural face, one that itself was worthy of observation and study.

—Linda Heuman Do we really have an American Buddhism yet? World Religions. Buddhism Today In the 21st century CE, it is estimated that 488 million (9-10% of the world population) people practice Buddhism. 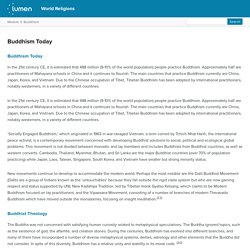 Approximately half are practitioners of Mahayana schools in China and it continues to flourish. The main countries that practice Buddhism currently are China, Japan, Korea, and Vietnam. Due to the Chinese occupation of Tibet, Tibetan Buddhism has been adopted by international practitioners, notably westerners, in a variety of different countries. ‘Socially Engaged Buddhism,’ which originated in 1963 in war-ravaged Vietnam, a term coined by Tchich Nhat Hanh, the international peace activist, is a contemporary movement concerned with developing Buddhist solutions to social, political and ecological global problems. New movements continue to develop to accommodate the modern world. Buddhist Theology The Buddha was not concerned with satisfying human curiosity related to metaphysical speculations.

The Origins of Buddhism. Buddhism, founded in the late 6th century B.C.E. by Siddhartha Gautama (the "Buddha"), is an important religion in most of the countries of Asia. 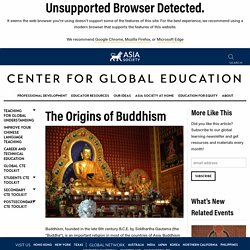 Buddhism has assumed many different forms, but in each case there has been an attempt to draw from the life experiences of the Buddha, his teachings, and the "spirit" or "essence" of histeachings (called dhamma or dharma) as models for the religious life. However, not until the writing of the Buddha Charita (life of the Buddha) by Ashvaghosa in the 1st or 2nd century C.E. do we have acomprehensive account of his life. The Buddha was born (ca. 563 B.C.E.) in a place called Lumbini near the Himalayan foothills, and he began teaching around Benares (at Sarnath). His erain general was one of spiritual, intellectual, and social ferment. This was the age when the Hindu ideal of renunciation of family and socia llife by holy persons seeking Truth first became widespread, and when the Upanishads were written. Author: Lise F.