How Does One Live a Meaningful and Fulfilled Life? 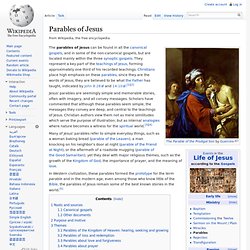 They represent a key part of the teachings of Jesus, forming approximately one third of his recorded teachings. Christians place high emphasis on these parables, since they are the words of Jesus, they are believed to be what the Father has taught, indicated by John 8:28 and 14:10.[1][2] Jesus' parables are seemingly simple and memorable stories, often with imagery, and all convey messages. Scholars have commented that although these parables seem simple, the messages they convey are deep, and central to the teachings of Jesus. Christian authors view them not as mere similitudes which serve the purpose of illustration, but as internal analogies where nature becomes a witness for the spiritual world.[3][4] Roots and sources[edit] As a translation of the Hebrew word מָשָׁל mashal the word parable can also refer to a riddle. People Tell A Pastor Why They Don&#39;t Believe In God.

BBC - Religion: Christianity. 10 Christian Stereotypes the World Believes Even If They Aren't True. The way the world sees Christian stereotypes is perpetuated by pop culture, old traditions and even social media. 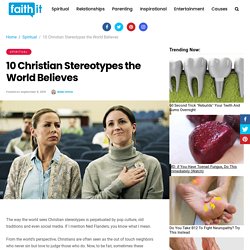 If I mention Ned Flanders, you know what I mean. From the world’s perspective, Christians are often seen as the out of touch neighbors who never sin but love to judge those who do. Now, to be fair, sometimes these stereotypes contain a kernel of truth, but I would argue that most of the truth is present only in small pockets of Christianity and not in the majority of believers practicing their faith. These popular stereotypes are teased out in The Resurrection of Gavin Stone, a new faith-based rom-com from producer Dallas Jenkins that releases this week in theaters. In it, Gavin Stone, played by actor Brett Dalton, is a washed up childhood celebrity who’s forced to return home and do community service. In the end, Stone discovers his paper-thin version of Christianity isn’t accurate, but he also finds out he has much more in common with church-goers than he ever expected. 1. 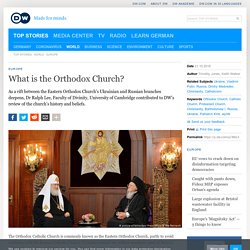 It counts around 200 million members, most of them in eastern Europe, Greece and the Caucasus. Its traditional base is in modern-day Istanbul, previously known as Constantinople. In its first thousand years, the Eastern Orthodox Church coexisted with the Rome-based Catholic Church, although relations between the two were always fraught by both theological and political differences. These differences ultimately led to the East-West Schism, also known as the Great Schism, in 1054 A.D., in which Rome and Constantinople broke with one another.

The Christian faith centers on beliefs regarding the birth, life, death and resurrection of Jesus Christ. While it started with a small group of adherents, many historians regard the spread and adoption of Christianity throughout the world as one of the most successful spiritual missions in human history. Christianity Beliefs Some basic Christian concepts include: Christians are monotheistic, i.e., they believe there’s only one God, and he created the heavens and the earth.

Who was Jesus? Most historians believe that Jesus was a real person who was born between 2 B.C. and 7 B.C. According to the text, Jesus was born to a young Jewish virgin named Mary in the town of Bethlehem, south of Jerusalem in modern-day Palestine. Ranked: The 20 Happiest Countries In The World. At a time like this—when the coronavirus pandemic is sweeping the globe and has killed over 10,000 people—we need some happy news. 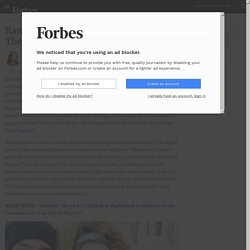 The annual World Happiness Report has just been released, timed to the UN's annual International Day of Happiness on March 20. For the third year in a row, Finland has placed at the top of the list as the happiest country in the world, with Denmark coming in second, followed by Switzerland, which pushed Norway out of the top three this year. (For tips on how people in Finland stay so happy, check out “Coronavirus Advice: The Happiest People In The World Share 5 Ways To Be Happy.”) And while it seems like a strange time to be evaluating happiness, the editors of the report point out that challenging times can actually increase happiness. “The global pandemic poses great risks for some of the main supports for well-being, most especially health and income,” the editors explain.