Buddhist Views on the Practice of Politics. Ten misconceptions about Buddhism. Robert E.

Buswell Jr. and Donald S. Lopez Jr. | November 19, 2013 Robert E. Buswell Jr. (left) holds the Irving and Jean Stone Endowed Chair in Humanities at the College of Letters and Science at UCLA. 1. Meditation is often identified as the central practice of Buddhism. 2. In fact, there are hundreds of forms of Buddhist meditation, some for developing deep states of concentration and mental bliss, some for analyzing the constituents of mind and body to find that there is no self, some for meeting the Buddha face to face. 3. Bhikṣu, the Sanskrit term translated as "monk," literally means "beggar. " 4. It is often said that a war has never been fought in the name of Buddhism. 5. What is Nirvana in Buddhism? The Pali word nibbana (nirvana in Sanskrit) was first used by the Buddha to describe the highest state of profound well-being a human is capable of attaining. 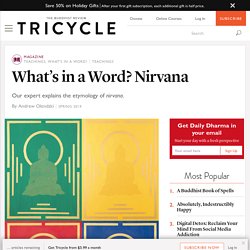 The mind awakens from delusion, is liberated from bondage, is cleansed of all its defilements, becomes entirely at peace, experiences the complete cessation of suffering, and is no longer reborn. Related: What’s in a Word? Emptiness More specifically, the fires of greed, hatred, and delusion—toxic unconscious mental and emotional dispositions that cause people to harm themselves and one another and cause suffering— have been extinguished (nibbuta) in a person who attains nirvana.

The popular account is that nirvana means the “blowing out” of the flames, but it is more likely that the word is based on the idea of removing fuel so that a fire goes out, or releasing the fire from clinging to its fuel. Related: Nirvana: Three Takes Each of the two major Mahayana schools took a different approach to the topic. Britannica. Nirvana, (Sanskrit: “becoming extinguished” or “blowing out”) Pali nibbana, in Indian religious thought, the supreme goal of certain meditation disciplines. 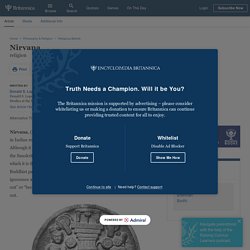 Although it occurs in the literatures of a number of ancient Indian traditions, the Sanskrit term nirvana is most commonly associated with Buddhism, in which it is the oldest and most common designation for the goal of the Buddhist path. It is used to refer to the extinction of desire, hatred, and ignorance and, ultimately, of suffering and rebirth. Literally, it means “blowing out” or “becoming extinguished,” as when a flame is blown out or a fire burns out.

Read More on This Topic Indian philosophy: The concepts of anatta and nibbana. BBC - Religions - Buddhism: Buddhism at a glance. What is the Purpose of Life in Buddhism. 15 Buddhist Teachings To Have a Better Life and Grow Spiritually - Lifestyle - Lifestyle. Buddhism is the only positivist religion history brings to us, (...) it doesn't believe in the fight against sins, but gives the reason to reality, it fights against suffering. 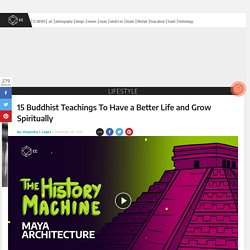 F. Nietzsche More than a religion, Buddhism is a philosophy that millions of people around the world can practice simultaneously with any other faith they hold. Nietzsche, who devoted a great deal of his work to show us the decadence of ascetic religions, specially Christianity, specified that Buddhism was "hygienic," as it coped with the real world. Nietzsche believed that both systems of thought, his own, and Buddhism share two important ideas.

What else did Nietzsche see in Buddhist philosophy for him to be convinced it didn't represent a decadent morality like all the others? 6 Ways Successful People Are Using Buddhism to Live a Better Life. At first glance, time taken out of your busy schedule — and into a spiritual lifestyle — seems like a setback… think again. 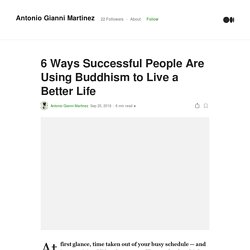 Many high caliber entrepreneurs are boosting productivity, improving their health and discovering untapped skills all by just learning some simple techniques from Buddhism. Major teachings of Buddhism have been: To be equally mindful towards actions and thoughtsTo develop wisdom and understanding 1. Compete in a highly stressful, and highly competitive industry, using these common Buddhist practices: Every day mindfulness — helps regulate the pressures of a high-stress careerMantra— realize your awareness about your knowledge and abilities (when called forward to pitch a new idea or to seek employment, your confidence will become more apparent!) “Yoga Nidra offers a space to explore what you need in the moment, as well as an opportunity to work on releasing long-held emotions.”— Varma, Jagdishr, et al. 2. Being a Better Human. Recently, someone asked me how they could become a good Buddhist and this got me thinking. 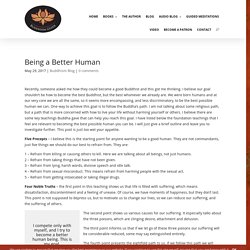 I believe our goal shouldn’t be how to become the best Buddhist, but the best whomever we already are. We were born humans and at our very core we are all the same, so it seems more encompassing, and less discriminatory, to be the best possible human we can. One way to achieve this goal is to follow the Buddha’s path. I am not talking about some religious path, but a path that is more concerned with how to live your life without harming yourself or others. I believe there are some key teachings Buddha gave that can help you reach this goal.

Five Precepts – I believe this is the starting point for anyone wanting to be a good human. 1 – Refrain from killing or causing others to kill. Buddhism - Definition, Founder & Origins. Buddhism is a faith that was founded by Siddhartha Gautama (“the Buddha”) more than 2,500 years ago in India.

With about 470 million followers, scholars consider Buddhism one of the major world religions. Its practice has historically been most prominent in East and Southeast Asia, but its influence is growing in the West. Many Buddhist ideas and philosophies overlap with those of other faiths. Buddhism Beliefs.