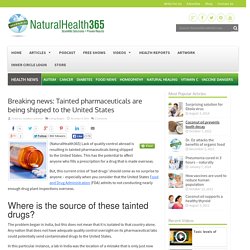 This has the potential to affect anyone who fills a prescription for a drug that is made overseas. But, this current crisis of ‘bad drugs’ should come as no surprise to anyone – especially when you consider that the United States Food and Drug Administration (FDA) admits to not conducting nearly enough drug plant inspections overseas. The problem began in India, but this does not mean that it is isolated to that country alone. Any nation that does not have adequate quality control oversight on its pharmaceutical labs could potentially send contaminated drugs to the United States. Common Medications That Rob the Body of Nutrients. Monday, March 02, 2015 By: Linda J. 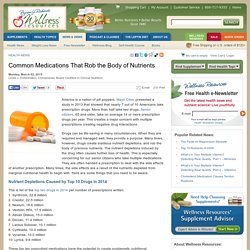 Dobberstein, Chiropractor, Board Certified in Clinical Nutrition America is a nation of pill poppers. Mayo Clinic presented a study in 2013 that showed that nearly 7 out of 10 Americans take prescription drugs. More than half take two drugs. Senior citizens, 65 and older, take on average 14 or more prescription drugs per year.

* Cholesterol myth exposed!! They use it to sell drugs that kill you! 12 Shocking Facts About the Dangers of Psychiatric Drugs. Every day, doctors and psychiatrists dole out behavior-modifying medicines for a variety of psychiatric disorders. 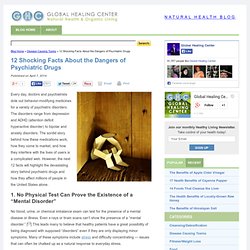 The disorders range from depression and ADHD (attention deficit hyperactive disorder) to bipolar and anxiety disorders. The sordid story behind how these medications work, how they come to market, and how they interfere with the lives of users is a complicated web. However, the next 12 facts will highlight the devastating story behind psychiatric drugs and how they affect millions of people in the United States alone. New zombie medical drug to hit the streets. Jon RappoportActivist Post It’s called Zohydro. 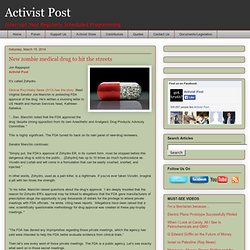 Clinical Psychiatry News (3/13) has the story. West Virginia Senator Joe Manchin is protesting FDA approval of the drug. He’s written a stunning letter to US Health and Human Services head, Kathleen Sebelius. Supreme Court rules Drug Companies exempt from Lawsuits. In case readers missed it with all the coverage of the Trayvon Martin murder trial and the Supreme Court’s rulings on gay marriage and the Voting Rights Act, the US Supreme Court also made a ruling on lawsuits against drug companies for fraud, mislabeling, side effects and accidental death. 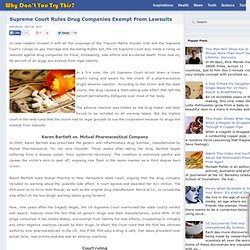 From now on, 80 percent of all drugs are exempt from legal liability. In a 5-4 vote, the US Supreme Court struck down a lower court’s ruling and award for the victim of a pharmaceutical drug’s adverse reaction. According to the victim and the state courts, the drug caused a flesh-eating side effect that left the patient permanently disfigured over most of her body.

Gates Foundation now funding Ebola vaccine development that might be forced upon us all. (NaturalNews) As the Ebola virus continues to spread in West Africa, health institutes, activist groups, medical volunteers and philanthropists are doing what they can to "help" not only contain the deadly disease but to stamp it out as well. 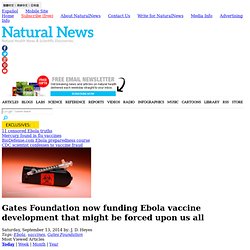 One of those philanthropy groups is the Bill & Melinda Gates Foundation, which has stepped up to donate $50 million in emergency funds to the effort, the most the organization has ever made in response to a health emergency. It follows a report from researchers at Oxford University that the virus could eventually be spread by wildlife to 22 African countries.

However, there's one problem with the effort -- the Gates Foundation is funding research into a new Ebola vaccine that everyone would be forced to take. Fear appears to be driving the push for a cure, however. How you've been hypnotized by Big Pharma and your drug pushing doctor to self-identify with diseases, drugs and vaccines. Drug makers selling mislabeled and untested drugs. (NaturalHealth365) You can’t believe everything you read. 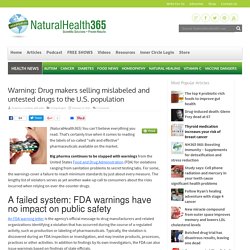 That’s certainly true when it comes to reading the labels of so-called “safe and effective” pharmaceuticals available on the market. Big pharma continues to be slapped with warnings from the United States Food and Drug Administration (FDA) for violations ranging from sanitation problems to secret testing labs. FDA warning: Drugs cause 2 million serious side effects. (NaturalHealth365) For years, proponents of natural health have been pointing to horrific statistics that show conventional medicine is falling woefully short when it comes to providing safe and effective treatment options, particularly when it comes to the use of pharmaceuticals. 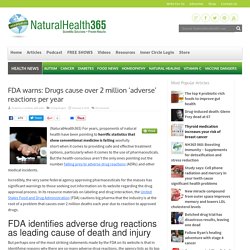 But the health-conscious aren’t the only ones pointing out the number falling prey to adverse drug reactions (ADRs) and other medical incidents. Incredibly, the very same federal agency approving pharmaceuticals for the masses has significant warnings to those seeking out information on its website regarding the drug approval process. In its resource materials on labeling and drug interaction, the United States Food and Drug Administration (FDA) cautions big pharma that the industry is at the root of a problem that causes over 2 million deaths each year due to reaction to approved drugs. Science: Big Pharma's Role in Iatrogenic Mitochondrial Diseases Caused by Vaccines and Prescription Drugs. By Catherine J. 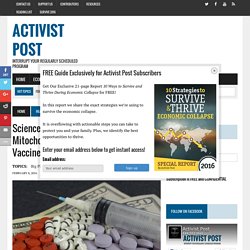 Frompovich Perhaps my long-held postulate—if doctors read and took seriously the emerging science in peer review journals regarding vaccine chemicals and neurotoxins, in particular, and disregarded Big Pharma’s hype and perks, they would not vaccinate infants and toddlers, or anyone—has been vindicated by impeccable, validating, and published research science!

What are mitochondria, you may be wondering. They are the powerhouses and sources in each cell that provide life energy in the form of ATP—Adenosine Triphosphate—for biochemical processes in the body. How mitochondrial damage happens According to published scientific research, STATINS RED ALERT: Widely prescribed drugs act as cellular poisons that accelerate aging... deactivate DNA repair... promote diabetes, muscle fatigue and memory loss. (NaturalNews) The statin drugs prescribed to over 100 million people around the world have now been exposed as cellular poisons that accelerate aging and promote muscle fatigue, diabetes, memory loss and more. 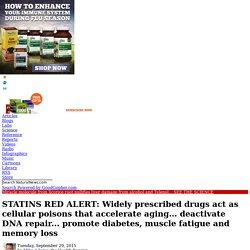 Scientists at Tulane University in New Orleans found that statin drugs -- which generate tens of billions of dollars a year for pharmaceutical companies -- "deactivate" the stem cells responsible for cellular repair throughout the body. While statin drugs have been aggressively pushed by for-profit drug companies as "miracle" medicines, in truth they can lead to disastrous (even fatal) side effects in many patients. As the UK Express writes, such side effects include "memory loss, muscle pain, diabetes, cataracts, liver dysfunction, diabetes, fatigue and memory loss. " "Statins make regular users become older faster," reports the Express, "leaving them open to long-term mental and physical decline... " XANAX - More Addictive Than Heroin. PHARMACEUTICAL LIES AND DECEPTION $600,000,000,000.00 TOTAL REVENUE AND THE EVILS OF ANTIDEPRESSANTS. The most popular FiercePharma stories of 2015.

Gilead warns of fatal reaction to Sovaldi, Harvoni and heart drug Gilead Sciences' superselling hepatitis C drugs have hit a speed bump after 9 patients taking either Harvoni or Sovaldi, as well as a common drug for heart arrhythmias, had serious reactions. Licensed to Kill: Psychiatry, Big Pharma and the State-Sanctioned Drug Cartel. 13th November 2015. Outrageous Big Pharma greed on parade as $1 pill for treating fatal infection suddenly skyrockets to $750 PER PILL! Big Pharma Company Buys Patent Rights to Life-Saving Drug and Raises Price by 5,000 Percent. By Andrew Emett (Editor’s Note: Even if you are against all synthetic drugs and feel they should never be taken under any circumstances, this type of criminality and lack of basic decency typifies the sordid state of Big Pharma healthcare.)

After purchasing the rights to a drug that prevents infections in people with weakened immune systems, including AIDS patients and cancer survivors undergoing chemotherapy, a pharmaceutical company has raised the price of the drug by 5,000%. Instead of paying $13.50 per pill, patients with life-threatening illnesses are now forced to pay $750 per pill. ADT Prostate Cancer Therapy Does More Harm Than Good. Monday, December 08, 2014 By: Linda J. Dobberstein, Chiropractor, Board Certified in Clinical Nutrition A form of prostate cancer therapy called Androgen Deprivation Therapy (ADT) has been making significant headline news recently. It has a long history of use, but controversy over ADT has been heating up. Research reveals findings that severely question the efficacy of the decades old treatment.

Making the connection: why most pharmaceutical pills cannot biologically heal the body - NaturalNews.com. Research: Insulin Kills Diabetics; Natural Substances Heal Them. 10,000 American Toddlers now Taking Amphetamine Based ADHD Drugs. Common Antibiotic Linked with Heart Deaths. Statin use can lead to heart failure: research - NaturalNews.com. Anti-anxiety drugs, sleeping pills proven to kill thousands of American each year. (NaturalNews) People who take prescription drugs for anxiety or to induce sleep are significantly more prone to early death than others, suggests a new study recently published in the British Medical Journal (BMJ). 19 Statistics About The Drugging Of America That Are Almost Too Crazy To Believe. Soviet psychiatric drug for dissidents given to US patients. Super Bugs from Antibiotics the FDA Knew About. Catherine J. Gulf War Illness Tied to Cipro Antibiotics.