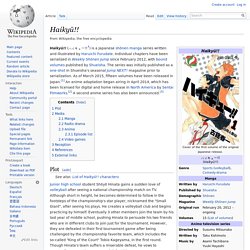 Although short in height, he becomes determined to follow in the footsteps of the championship's star player, nicknamed the "Small Giant", after seeing his plays. He creates a volleyball club and begins practicing by himself. Eventually 3 other members join the team by his last year of middle school, pushing Hinata to persuade his two friends who are in different clubs to join just for the tournament. Hajime no Ippo. Story[edit] Ippo Makunouchi was an extremely shy high school student who never had the time to make friends because he was always busy helping his mother run their family fishing charter business. 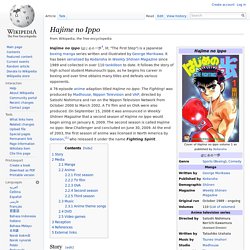 Because he kept to himself, a group of bullies led by Umezawa got into the habit of picking on him. One day, these bullies gave him a rather serious beating. A middle-weight professional boxer who was passing by stopped the bullies and took the injured Ippo to the Kamogawa Gym (鴨川ボクシングジム, Kamogawa Bokushingu Jimu?) , owned by retired boxer Genji Kamogawa, to treat his wounds. Baby Steps. 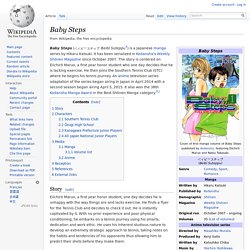 Is a Japanese manga series by Hikaru Katsuki. It has been serialized in Kodansha's Weekly Shōnen Magazine since October 2007. The story is centered on Eiichirō Maruo, a first year honor student who one day decides that he is lacking exercise. He then joins the Southern Tennis Club (STC) where he begins his tennis journey. An anime television series adaptation of the series began airing in Japan in April 2014 with a second season began airing April 5, 2015. Kuroko's Basketball. Kuroko's Basketball, known in Japan as Kuroko no Basuke (黒子のバスケ?) 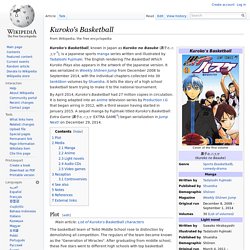 , is a Japanese sports manga series written and illustrated by Tadatoshi Fujimaki. The English rendering The Basketball Which Kuroko Plays also appears in the artwork of the Japanese version. It was serialized in Weekly Shōnen Jump from December 2008 to September 2014, with the individual chapters collected into 30 tankōbon volumes by Shueisha. It tells the story of a high school basketball team trying to make it to the national tournament. By April 2014, Kuroko's Basketball had 27 million copies in circulation. Eyeshield 21. Eyeshield 21 (Japanese: アイシールド21, Hepburn: Aishīrudo Nijūichi?) 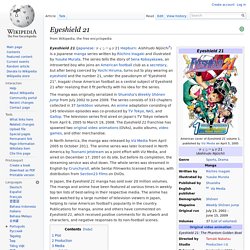 Is a Japanese manga series written by Riichiro Inagaki and illustrated by Yusuke Murata. The series tells the story of Sena Kobayakawa, an introverted boy who joins an American football club as a secretary, but after being coerced by Yoichi Hiruma, turns out to play wearing an eyeshield and the number 21, under the pseudonym of "Eyeshield 21". Inagaki chose American football as a central subject of Eyeshield 21 after realizing that it fit perfectly with his idea for the series. Fandom powered by Wikia. Days (manga) Days is the second soccer manga series written by Yasuda, the first being "Furimukuna Kimi wa" (振り向くな君は, loosely translated as "You, don't turn around! 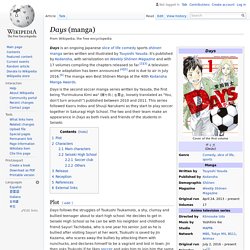 ") published between 2010 and 2011. This series followed Kaoru Indou and Shuuji Narukami as they start to play soccer together in Sakuragi High School. The two and their team make an appearance in Days as both rivals and friends of the students in Seiseki. Days follows the struggles of Tsukushi Tsukamoto, a shy, clumsy and bullied teenager about to start high school. He decides to get in Seiseki High School so he can be with his neighbor and childhood friend Sayuri Tachibaba, who is one year his senior. Prince of Stride. Plot[edit] The series Prince of Stride: Alternative (プリンス・オブ・ストライド オルタナティブ ) revolves around the extreme sport "Stride", a sport where a team of 5 plus a relationer runs relay races in towns. 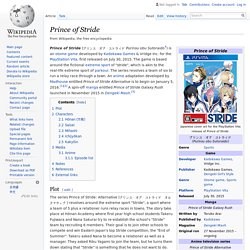 The story take place at Hōnan Academy where first year high school students Takeru Fujiwara and Nana Sakurai try to re-establish the school's "Stride" team by recruiting 6 members. Their goal is to join other schools to compete and win Eastern Japan's top Stride competition, the "End of Summer". Takeru asked Nana to become a relationer as well as a manager. They asked Riku Yagami to join the team, but he turns them down stating that "Stride" is something that he does not want to do. Characters[edit] Hōnan (方南)[edit] The Knight in the Area. The Knight in the Area (Japanese: エリアの騎士, Hepburn: Area no Kishi?) 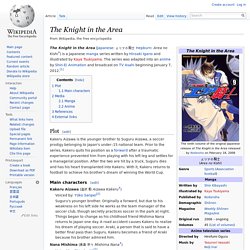 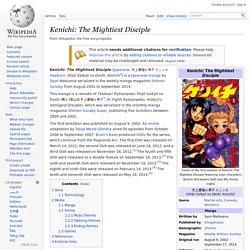 Is a Japanese manga by Syun Matsuena serialized in the weekly manga magazine Shōnen Sunday from August 2002 to September 2014. This manga is a remake of Tatakae! Ryōzanpaku Shijō Saikyō no Deshi (戦え! 梁山泊 史上最強の弟子? , lit. The first tankōbon was published on August 9, 2002. Ace of Diamond. This article is about the Japanese manga. 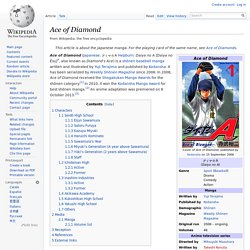 For the playing card of the same name, see Ace of Diamonds. Ace of Diamond (Japanese: ダイヤのA, Hepburn: Daiya no A [Daiya no Ēsu]? , also known as Diamond's Ace) is a shōnen baseball manga written and illustrated by Yuji Terajima and published by Kodansha. It has been serialized by Weekly Shōnen Magazine since 2006. Hungry Heart: Wild Striker. Animax later aired the series across its other networks worldwide, including its English-language networks in Southeast Asia and South Asia, and its other networks, including Hong Kong, Taiwan, Latin America and numerous other regions.

The anime series has also been broadcast, translated and dubbed in English, Spanish, Portuguese, Italian, Hindi, Urdu and other languages. German-based sportswear brand Puma were the commercial sponsors for the anime series, with many of the clothing and sportsgear sporting Puma's brand. Storyline[edit] Hungry Heart: Wild Striker tells the story of Kanō Kyōsuke, a teenage high school student who at the beginning of the series, has just transferred into Jyoyō Orange High School.

It was serialized in Weekly Shōnen Jump from October 1990 to June 1996, with the chapters collected into 31 tankōbon volumes by Shueisha. Slam Dunk has sold over 121 million copies in Japan alone, making it one of the best-selling manga series in history. In 1994, it received the 40th Shogakukan Manga Award for the shōnen category. In 2010, Inoue received special commendations from the Japan Basketball Association for helping popularize basketball in Japan. Hanamichi Sakuragi is a delinquent and the leader of a gang. Aoharu x Machinegun. Aoharu x Machinegun (Japanese: 青春×機関銃, Hepburn: Aoharu x Kikanjū?) Is a Japanese manga series by NAOE, serialized in Square Enix's shōnen manga magazine Monthly GFantasy since January 2013 and collected in seven tankōbon volumes. An anime television series adaptation has been announced and is scheduled to begin airing on July 2, 2015.[1]