Commercialism of Sport in the USA and UK 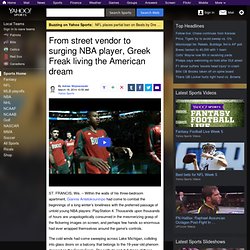 FRANCIS, Wis. – Within the walls of his three-bedroom apartment, Giannis Antetokounmpo had come to combat the beginnings of a long winter's loneliness with the preferred passage of untold young NBA players: PlayStation 4. Thousands upon thousands of hours are unapologetically consumed in the mesmerizing grasp of the flickering images on screen, and perhaps few hands so enormous had ever wrapped themselves around the game's controls. A Hoop Dreams Reality Check. Many people see sports as the only viable pathway to the American Dream for poor African-American families. 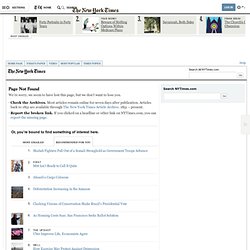 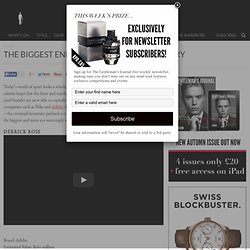 Not only are the salaries larger but the fame and stardom is immensely more substantial, meaning that athletes (and brands) are now able to capitalise on this and make a profit. Multi-billion dollar companies such as Nike and Adidas shell out millions to be partnered with these sporting stars – the eventual monetary payback a considerable amount more than they pay out. These are the biggest and most eye-wateringly expensive endorsement deals in history. Brand: Adidas Estimated Value: $260 million You thought Premier League football players were high earners, you make it big in the NBA or NFL in the US and you are guaranteed to be making some serious money.

Brand: Nike Estimated Value: $250 million It was about time that someone took over from the King of golfing endorsements, Tiger Woods. Women cyclists face an uphill climb to attract sponsors. The Women's Tour, which is scheduled to go around England for five days in May, already has the International Cycling Union (UCI), local authorities and a terrestrial broadcaster on board. 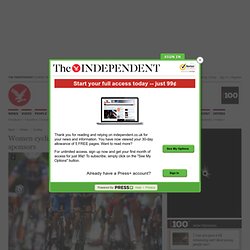 But, when it comes to pinning down any corporate sponsors, organisers say they are "hitting a glass ceiling". The case is a dramatic illustration of the gulf in funding between men's and women's sport. Only 0.5 per cent of sponsorship money in Britain goes to women's sport, despite the success of female athletes in this country. Some of the rebuffs from major brands – all of whom have stringent equal opportunities policies – have been startlingly blunt. The responses reported by organisers have included: "We don't believe anyone is interested in women's sport" and "we focus our sports investment on men". MediaMade.pdf. Welcome to Forbes.

What sports capitalism can teach us about real world fair play. For the ninth straight year Real Madrid are ranked as the world's richest club with a total revenue of $702 million. 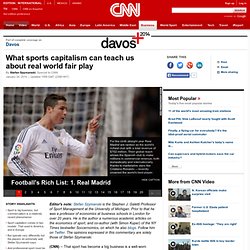 Their global reach allows the Spanish club to make millions in commercial revenue, both domestically and internationally, thanks to marketable stars like Cristiano Ronaldo -- recently crowned the world's best player. Barcelona are second in the list, $47 million behind Real, and can also generate huge sums commercially on the back of players like Lionel Messi. The Argentina striker is their talisman and has helped them to win the Spanish league title four times in the last five years. No-one could hold a candle to Bayern Munich in terms of silverware in 2013, the German champions winning an incredible five titles, including the European Champions League. They have usurped Manchester United in third spot and recorded a 17% growth in revenue to hit $585m.

Manchester City leapfrogged Arsenal and Chelsea to become the second richest English Premier League club in the list. 2. National Collegiate Athletic Association. The National Collegiate Athletic Association (NCAA) is a non-profit association that regulates athletes of 1,281 institutions, conferences, organizations, and individuals that organizes the athletic programs of many colleges and universities in the United States and Canada. 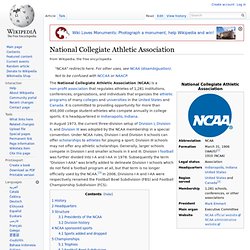 It is committed to providing opportunity for more than 450,000 college student-athletes who compete annually in college sports. It is headquartered in Indianapolis, Indiana. History[edit] College athletes suffer most from today’s commercialism. Was there ever a “Golden Age” of intercollegiate sports? 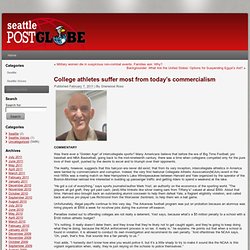 Many Americans believe that before the era of Big Time Football, pro baseball and NBA Basketball, going back to the mid-nineteenth century, there was a time when collegians competed only for the pure love of their sport, pushed by the desire to excel and to triumph over their opponents. The reality, however, suggests that this halcyon era never did exist; that from its very inception, intercollegiate athletics in America were tainted by commercialism and corruption.