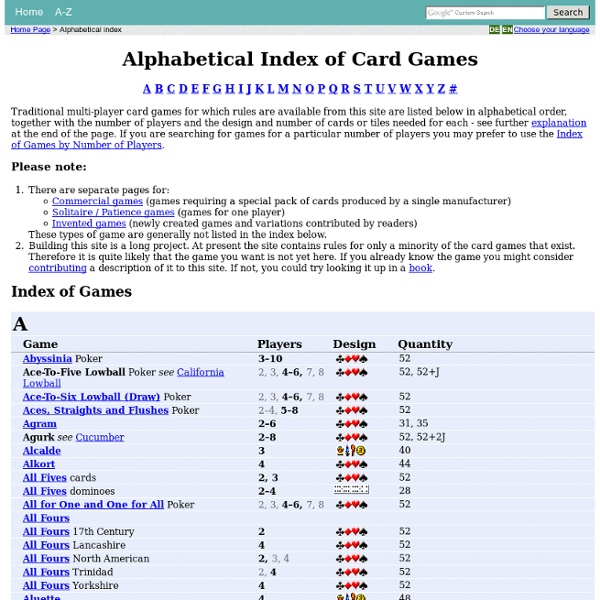 Traditional multi-player card games for which rules are available from this site are listed below in alphabetical order, together with the number of players and the design and number of cards or tiles needed for each - see further explanation at the end of the page. If you are searching for games for a particular number of players you may prefer to use the Index of Games by Number of Players. Please note: There are separate pages for: Commercial games (games requiring a special pack of cards produced by a single manufacturer) Solitaire / Patience games (games for one player) Invented games (newly created games and variations contributed by readers) These types of game are generally not listed in the index below. Building this site is a long project. At present the site contains rules for only a minority of the card games that exist. Index of Games Explanation of symbols Players The recommended number of players for each game is given in bold. Design Quantity

GameGarage.co.uk Home > Puzzle Games Your task in this game is to help the pig get from his position to the multicoloured bottle of liquid, once he reaches that he will be able to fly away. To do this you will have to click on the coloured bottles in the top right of the screen to move the corrosponding coloured blocks in the game, you will have to do this several times in order to complete some levels, think ahead in each… Easy Joe Easy Joe needs some help getting to his party, along the way he will have to pass… Online Books : "Golden Guide Hallucinogenic Plants" - pg 1-10 HALLUCINOGENIC PLANTSby RICHARD EVANS SHULTES Illustrated by ELMER W. SMITH. GOLDEN PRESS - NEW YORK 1976 Western Publishing Company, Inc. .Scanning and html by loplop, Aug '99 Maintained by Erowid.org FOREWORD Hallucinogenic plants have been used by man for thousands of years, probably since he began gathering plants for food.

Swedish Students Showcase Designs for Children at 'Play In Progress' During Milan Design Week Play is fundamental to a child's development, but what happens when they don't have access to proper playgrounds or stimulating environments? Students from the HDK master program Child Culture Design created an exhibit to explore new ways of bringing play into everyday objects to help foster imagination and creativity. Dubbed "Play In Progress", the exhibit was one of our favorites at the Salone Mobile. Djambi Djambi (also described as "Machiavelli's chessboard") is a board game and a chess variant for four players, invented by Jean Anesto in 1975. Board of Djambi, with the pieces in their start position. Each piece is identified by the first letter of its name as well as a symbol.

Conjuration "The School of Conjuration governs raising the dead or summoning creatures from the Realm(s) of Oblivion. This skill makes it easier to cast these spells as well as Soul Trap and bindings." ―The Elder Scrolls V: Skyrim For other instances, see Conjuration. After the Dragonborn reaches around level 30 in Conjuration, guards may say: "Hail summoner, conjure me up a warm bed, would you?" MadeGood.org Provides Cyclists With Free Info On Bike Repair Stumped when it comes to doing anything more for your bike than putting air in the tires? If you’re looking to learn a bit more about cycle repair, check out MadeGood.org, a small non-profit organization providing free information on how to fix bicycles. Their website offers over a hundred free DIY videos to readers and they have the plans to add even more. MadeGood.org hopes to be the first complete resource of high-quality how-to information on cycle repair. Check them out today! +MadeGood.org