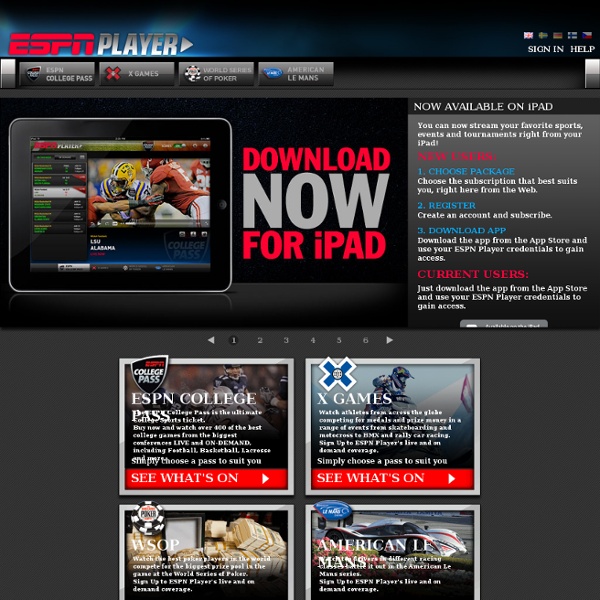 Live Sport Streams, Football, Soccer, Ice Hockey, Tennis, Basketball LiveTV is a free website for live sport streams, sport videos and live score. We offer you a great possibility to follow numerous live sport events, including football games of the UEFA Champions League, English Premier League, German Bundesliga, French Ligue 1, Spanish Primera Division and Italian Serie A, or major events in other sport types, such as ice hockey with the NHL or basketball with the NBA. In our website, the P2P technology plays a key role, allowing you to watch medium to high quality streams completely free.

Filip Forsberg Filip Forsberg (born August 13, 1994) is a Swedish professional ice hockey player currently plays for the Nashville Predators of the National Hockey League (NHL). Forsberg was selected by the Washington Capitals in the 1st round (11th overall) of the 2012 NHL Entry Draft. Playing career[edit] Forsberg had standout performances at both the 2011 Ivan Hlinka Memorial Tournament, Breclav, Czech Republic and World U18 Championships Tournament, Brno, Czech Republic where he was a member of the silver medal winning Team Sweden.

ESPN: Shop Show your team pride with jerseys, hats and shirts How do you pay tribute? With fan-favorite gear and apparel. Pay homage to your team with the stuff true fans need. PokerFM - Первый подкаст о покере на русском языке 2010 Mini Countryman (from Mini Press Release) Fun has no Limits: The MINI Countryman*. (* The name of the car may vary in some markets.) MINI is adding a fourth model to the family, opening up a new dimension of that unmistakable MINI feeling. As a genuine Crossover, the MINI Countryman bridges the gap between the classic concept of the MINI and a modern Sports Activity Vehicle. Boasting enhanced opportunities in urban mobility and beyond, the MINI Countryman offers that unique driving pleasure so typical of MINI to new target groups requiring extra space and flexibility. As the first model in the MINI range with four doors and a wide-opening rear lid, the MINI Countryman provides even greater freedom of space for truly versatile use, a slightly elevated seating position, and optimized driving comfort.

2014 Winter Olympics The 2014 Winter Olympics, officially called the XXII Olympic Winter Games (French: Les XXIIes Jeux olympiques d'hiver) (Russian: XXII Олимпийские зимние игры, tr. XXII Olimpiyskiye zimniye igry) and commonly known as Sochi 2014, were a major international multi-sport event held from February 7 to February 23, 2014 in Sochi, Krasnodar Krai, Russia, with opening rounds in certain events held on the eve of the opening ceremony, 6 February 2014. Both the Olympics and 2014 Winter Paralympics were organized by the Sochi Organizing Committee (SOOC). Sochi was selected as the host city in July 2007, during the 119th IOC Session held in Guatemala City. It was the first Olympics in Russia since the breakup of the Soviet Union in 1991. The Soviet Union was the host nation for the 1980 Summer Olympics in Moscow.

ESPN Classic Wave As we announced in August 2010, we are not continuing active development of Google Wave as a stand-alone product. Google Wave will be shut down in April 2012. This page details the implication of the turn down process for Google Wave. Stage 1: Google Wave is read-only -- January 31, 2012 In this stage, you will no longer be able to create or edit waves. Marking a wave as read will also not be saved. FIS Alpine Ski World Cup Lindsey Vonn in 2010 with 8 crystal globes, including 3 for FIS World Cup overall titles and 5 for various discipline titles. Her total through 2002–2013 is 17 globes. Since its introduction in 1967, FIS Alpine Ski World Cup events have been hosted by 25 different countries from five continents. Competitors attempt to achieve the best time in four disciplines: slalom, giant slalom, Super G, and downhill. The fifth event, the combined, employs the downhill and slalom. The World Cup originally included only slalom, giant slalom, and downhill races.

ESPN F1 ESPN.com: Page 2 - Sport Skills Difficulty Rankings We sized them up. We measured them, top to bottom. We've done our own Tale of the Tape, and we've come to a surprising conclusion.