Australian sport and racial vilification. Speech to Australian and New Zealand Sports Law Association Annual Conference Adelaide Check against delivery Most of us would agree that booing can be a healthy ritual in Australian sporting life. 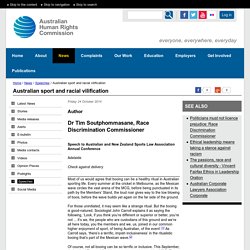 International Teams. If there are two things that can be said to mark an Australian summer, they are the beach and cricket. 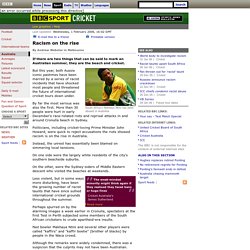 But this year, both Aussie iconic pastimes have been marred by a series of racist incidents that have shocked most people and threatened the future of international cricket tours down under. By far the most serious was also the first. More than 30 people were hurt in early December's race-related riots and reprisal attacks in and around Cronulla beach in Sydney. Politicians, including cricket-loving Prime Minister John Howard, were quick to reject accusations the riots showed racism is on the rise in Australia. Instead, the unrest has essentially been blamed on simmering local tensions. On one side were the largely white residents of the city's southern beachside suburbs. ICC resolves allegation of racial abuse through confidential conciliation process.

The Afghanistan Cricket Board and the Afghanistan players in question have offered an apology to the Namibian player involved ICC logo David Richardson: “No place for racism within the sport; ICC is proud of the diversity of the global cricket community” Following a complaint made by Cricket Namibia under the ICC Anti-Racism Code during the ICC Intercontinental Cup fixture between Afghanistan and Namibia played in Greater Noida, India, from 10-12 April 2016, the ICC has announced that a confidential conciliation process has today (Monday) been successfully undertaken by relevant parties from both teams in Edinburgh, and a consensual resolution of the matter achieved. 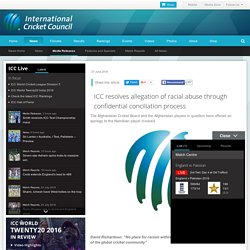 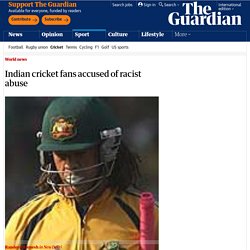 The four were ejected from Wednesday's one-day international (ODI), which India narrowly won, after officials showed police pictures of three men and one woman making racist gestures towards Symonds, who was the only black player in the Australian team. The fans were charged with "misbehaviour and harassment" and were freed on bail pending a court appearance. Australian newspapers also carried photographs of the Mumbai crowd, clearly showing spectators making offensive gestures. The seven-match ODI series, which Australia won 4-2, was marred by allegations of racial comments aimed at the Australians. World cricket crisis as tour suspended over racism allegations. International cricket officials were last night locked in intense negotiations to try to resurrect India's tour of Australia after allegations of racism against one of the tourists' leading players threatened to plunge the game into crisis. 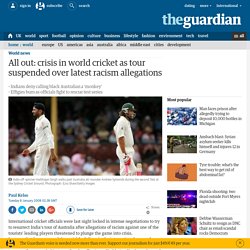 In a row that has reopened the racial fault lines in the international game, the Board of Cricket Control of India (BCCI) announced yesterday that it had temporarily suspended its tour after the off-spinner Harbhajan Singh was banned for three matches for allegedly racially abusing Andrew Symonds, Australia's only black player. The Australians allege that Singh called Symonds a "monkey" in a heated exchange during the second Test in Sydney, which was won narrowly by Australia on Sunday evening. Racial abuse interrupts Test match - Cricket - Sport - theage.com.au. Racism and prejudice in Australian sport : What’s the score? A survey of cultural diversity and racism in Australian sport. Racism in sport – News, Research and Analysis – The Conversation. Racism is a charge that could be leveled at cinema from its very inception. 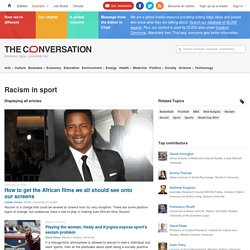 There are some positive signs of change, but audiences have a role to play in making sure African films flourish. If a misogynistic atmosphere is allowed to prevail in men’s individual and team sports, then all the platitudes about sport being a socially positive force stand exposed. Not everyone who boos footballer Adam Goodes may be racist. But there are things you can do if you witness both overt and subtle, everyday racism. In the wake of the racist behaviour of a group of Chelsea supporters on the Paris Métro last week, a range of excellent critical commentaries emerged, pondering what these actions signified and how English… Stamping out racism in sport means social media too. According to figures from the Home Office, only 42 arrests were made for “racial or indecent chanting” at English football matches during the 2012-13 season. 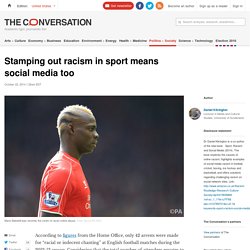 Considering that the total number of attendees equates to millions, it could be concluded that racism is no longer a pressing issue in football. But racism is a tenacious, stubborn and powerful parasite that adapts to survive. Overt racism has declined since the 1960s and 1970s but in its place more covert practices have emerged. Liverpool striker Mario Balotelli was recently the victim of racist abuse after tweeting “Man Utd…LOL” during Leicester City’s 5-3 victory against Louis Van Gaal’s team. Within moments, racist tweets began to flow. One particularly high-profile case involved former Bolton midfielder Fabrice Muamba. LOL. The situation escalated quickly, and after several racist tweets, Stacey began to backtrack, claiming his account had been hacked. Fertile ground Push the button But there is still room for improvement.