When Sport becomes a crime

Prosecute Excess Violence in Sports. IN the , hit lists are nothing new. 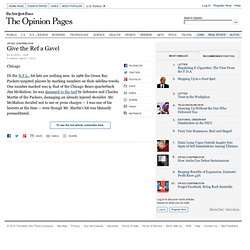 In 1986 the Green Bay Packers targeted players by marking numbers on their sideline towels. One number marked was 9, that of the Chicago Bears quarterback Jim McMahon: he was slammed to the turf by defensive end Charles Martin of the Packers, damaging an already injured shoulder. Mr. McMahon decided not to sue or press charges — I was one of his lawyers at the time — even though Mr. Martin’s hit was blatantly premeditated. Sports bounties — fees paid to team members for injuring opposing players on the field of play — are old news, too. The Saints’ bounty program, in operation from 2009 to 2011 and run by the team’s defensive coordinator at the time, Gregg Williams, paid bonuses to more than 20 Saints players for injuring key members on opposing teams through violent hits. Contact sports should not, of course, be routinely second-guessed by crowded courts.

Violence and Sports–Ugly but Useful? Violence is an integral part of contemporary sports. 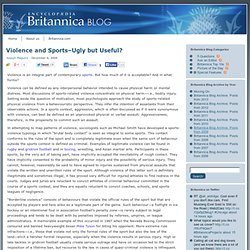 But how much of it is acceptable? And in what forms? Violence can be defined as any interpersonal behavior intended to cause physical harm or mental distress. Most discussions of sports-related violence concentrate on physical harm—i.e., bodily injury. Setting aside the question of motivation, most psychologists approach the study of sports-related physical violence from a behaviouristic perspective. In attempting to map patterns of violence, sociologists such as Michael Smith have developed a sports-violence typology in which “brutal body contact” is seen as integral to some sports. “Borderline violence” consists of behaviours that violate the official rules of the sport but that are accepted by players and fans alike as a legitimate part of the game. Most sports sociologists, however, challenge this hypothesis and believe instead that research confirms that violence and aggression are socially learned. 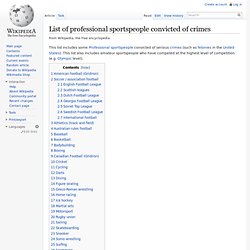 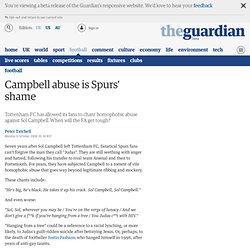 They are still seething with anger and hatred, following his transfer to rival team Arsenal and then to Portsmouth. For years, they have subjected Campbell to a torrent of vile homophobic abuse that goes way beyond legitimate ribbing and mockery. These chants include: "He's big, he's black. He takes it up his crack. And even worse: "Sol, Sol, wherever you may be / You're on the verge of lunacy / And we don't give a f**k if you're hanging from a tree / You Judas c**t with HIV. " "Hanging from a tree" could be a reference to a racist lynching, or more likely, to Judas's guilt-ridden suicide after betraying Jesus.

For years, Tottenham and the Football Association (FA) did nothing. The FA would not have sat on the fence if the abuse had been of a racist nature. The police announced an investigation into "public order offences" and urged the FA to take action. Crossing the line - When sport becomes a crime. Speech by Nick Hawkins, Chief Crown Prosecutor for CPS Wessex, to the University of Portsmouth on 28 March 2012. 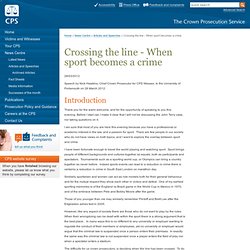 Introduction Thank you for the warm welcome, and for the opportunity of speaking to you this evening. Before I start can I make it clear that I will not be discussing the John Terry case, nor taking questions on it. I am sure that most of you are here this evening because you have a professional or academic interest in the law, and a passion for sport. There are few people in our society who do not have views on both topics, and I want to explore the overlap between sport and crime. I have been fortunate enough to travel the world playing and watching sport. Similarly sportsmen and women can act as role models both for their general behaviour and for the mutual respect they show each other in victory and defeat. Those of you younger than me may similarly remember Flintoff and Brett Lee after the Edgbaston ashes test in 2005. Crime on the field Rugby assault Football assault Cricket.