The Value of Sport

One hour of exercise a week can prevent depression. Public Leisure generates over £3.3bn in social value to the UK. Community leisure contributes more than £3.3bn to UK society, according to a landmark report that is the first to put a figure on the wider social value of leisure centres in Britain. 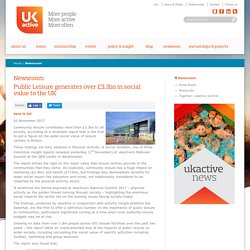 These findings are fully detailed in Physical Activity: A Social Solution, one of three milestone insight reports released yesterday (1st November) at ukactive’s National Summit at the QEII centre in Westminster. The report shines the light on the major value that leisure centres provide to the communities that they serve. As expected, community leisure has a huge impact on wellbeing (£2.4bn) and health (£715m), but findings also demonstrate benefits for wider social issues like education and crime, not traditionally considered to be impacted by the physical activity sector. 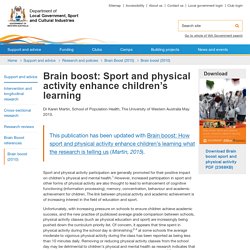 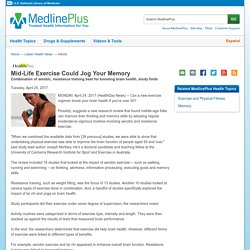 Possibly, suggests a new research review that found middle-age folks can improve their thinking and memory skills by adopting regular moderate-to-vigorous routines involving aerobic and resistance exercise. "When we combined the available data from [39 previous] studies, we were able to show that undertaking physical exercise was able to improve the brain function of people aged 50 and over," said study lead author Joseph Northey.

He's a doctoral candidate and teaching fellow at the University of Canberra Research Institute for Sport and Exercise in Australia. The review included 18 studies that looked at the impact of aerobic exercise -- such as walking, running and swimming -- on thinking, alertness, information processing, executing goals and memory skills. Resistance training, such as weight lifting, was the focus of 13 studies. Dr. Sports Think Tank - Physical activity can boost young people’s mental health and wellbeing. A new international study into the impact of sport, exercise and dance on 15-24 year olds has shown evidence that physical activity can help improve teens' and young adults' mental wellbeing. 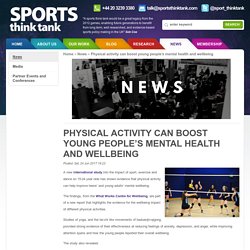 The findings, from the What Works Centre for Wellbeing, are part of a new report that highlights the evidence for the wellbeing impact of different physical activities. Studies of yoga, and the tai-chi like movements of baduanjin-qigong, provided strong evidence of their effectiveness at reducing feelings of anxiety, depression, and anger, while improving attention spans and how the young people reported their overall wellbeing. The study also revealed: Health and Wellbeing Benefits of Swimming 2017 Report (UK) How does the brain respond to a single bout of exercise? A Life-Long Approach to Physical Activity for Brain Health. Introduction It is predicted that by 2050, the global population of older people, in both developed and developing countries, will more than double, reaching nearly 2.1 billion (United Nations Department of Economic and Social Affairs Population Division, 2015). 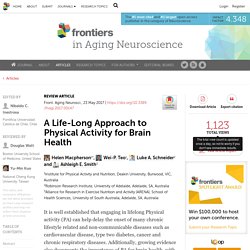 The number of people aged 80 years or over is increasing at an even faster rate, resulting in a growing number of indivduals living for longer with significant disability, reduced quality of life and multiple chronic conditions (Prince et al., 2015). As a consequence of rapid population aging, there is a rising prevalence of age-related neurodegenerative disorders including Alzheimer’s disease (AD) and Parkinson’s disease (PD; Reitz et al., 2011; Wirdefeldt et al., 2011).

When we think of the benefits of physical activity, we often think of cardiovascular health and reducing our risk of chronic disease. 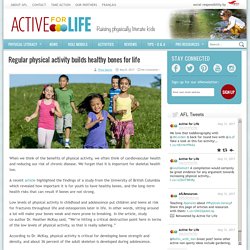 We forget that it is important for skeletal health too. A recent article highlighted the findings of a study from the University of British Columbia which revealed how important it is for youth to have healthy bones, and the long-term health risks that can result if bones are not strong. Low levels of physical activity in childhood and adolescence put children and teens at risk for fractures throughout life and osteoporosis later in life. In other words, sitting around a lot will make your bones weak and more prone to breaking. In the article, study co-author Dr. According to Dr. “Our bones respond to everything we do from the time we’re born and I think the investment has to happen now,” she said. 6 Science-Backed Ways Exercise Benefits The Body And Brain.

Participation in a weight management program reduces job absenteeism. Individuals with obesity who enrolled in a structured weight loss program report fewer hours missed from work after six months in the program, according to a study being presented Sunday at the Endocrine Society's 99th annual meeting in Orlando, Fla. 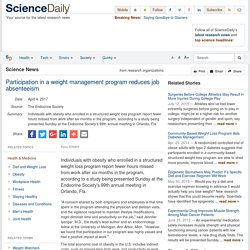 "A concern shared by both employers and employees is that time spent in the program attending the physician and dietitian visits, and the vigilance required to maintain lifestyle modifications, might diminish time and productivity on the job," said Jennifer Iyengar, M.D., the study's lead author and an endocrinology fellow at the University of Michigan, Ann Arbor, Mich. "However, we found that participation in our program was highly valued and had a positive impact at work. " The total economic cost of obesity in the U.S. includes indirect costs, such as missed time from work, lost productivity at work and premature death due to obesity-related health problems, research shows.

ReconomicsPlusReport Value of Outdoor Recreation. Study shows the alarming cost of early childhood obesity. Australian parents have access to a "unique window of opportunity" to influence their children's behaviours that can not only bring short-term health benefits, but also affect health for the rest of their lives. 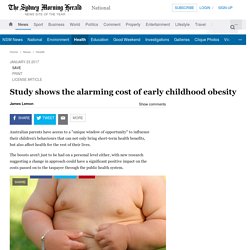 The boosts aren't just to be had on a personal level either, with new research suggesting a change in approach could have a significant positive impact on the costs passed on to the taxpayer through the public health system. One in five Australian children are overweight or obese by the time they start school, with about 5 per cent of children aged between two and four years classified as obese. New research published on Monday in the Australian and New Zealand Journal of Public Health estimates the direct public health burden attributed to early childhood obesity to be worth as much as $17 million annually.

Sport is more than just a fringe player in Australia’s economy. In strictly statistical terms, the Australian sport and physical recreation sector is a “fringe player” in the national economic game. 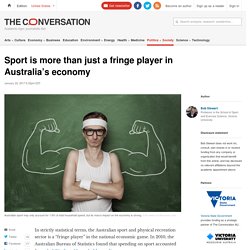 In 2010, the Australian Bureau of Statistics found that spending on sport accounted for only 1.6% of total household spending. Another interesting result from the ABS was that spending on sport accounted for just over 12% of total leisure and recreation spending – a sector that included the arts, cinema, books and tourism, as well as sports, exercise and games. Sport and Rec Industries WorkForce Scan Skills Active Dec2016. Art may highlight the human condition, but sport matters too - Sport.

Opinion Updated I went to a Nick Cave gig the other day. 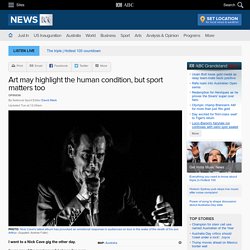 It was one of the most powerful shows I've ever seen; one of the most emotional. How could it not be? My thoughts were preoccupied by thoughts for the man on stage, whose 15-year-old son, Arthur, fell from a cliff to his death in July 2015, completely disoriented after taking LSD. That unthinkable tragedy is ever present in the album that Cave subsequently released last year, The Skeleton Tree. No doubt it was in the thoughts of all those people who have seen Cave on this Australian tour and literally reached out their hands to him as if to offer comfort. The next day my wife and I were listening to the hauntingly beautiful song from The Skeleton Tree, Distant Sky.

Beauty can do that to you. As my wife so succinctly said: "That's what art can do. It's why we need artists. Sport isn't art. Interactive body map: physical inactivity and the risks to your health. Uncovering the social value of sport (UK) Savings, Longevity and the Year in Fitness. There were other lessons in this year’s exercise research, of course. Some of the most compelling involved advances in our understanding of how exercise may change our bodies invisibly but pervasively. A February study, for instance, involved mice with a high risk of developing melanoma.

If those animals ran moderately on wheels, their immune systems changed in ways that enabled them to combat the cancer. They produced more of a type of immune cell known to fight malignancies than did sedentary animals and were much less likely to develop invasive disease. Exercise, in other research this year, also was shown to prompt muscles to release substances that wind up changing the structure and function of the brain. Fat cells likewise were transformed by exercise, another study found. So exercise, according to this finding, may contribute to metabolic health by producing a hormone that can brown human fat.

Case studies - contribution of sport to regional development. Running makes you smarter – here’s how. As far back as the Greeks and Romans, humans have documented the belief that there is a strong link between exercise and intelligence. But in the last two decades, neuroscience has begun to catch up with Thales and Juvenal’s idea that a sound mind flourishes in a healthy body. While the studies unite in telling us that running will makes us smarter, it is only partly true. Physical exercise improves memory retention. The economic and social value of sport and recreation to nz. The Economic and Social Value of Sport and Recreation to New Zealand » Managing sport » Sport New Zealand. Sport & Belonging Exploring connections to the community. Sport & Belonging - Community Foundations of Canada. Social Return on Investment in Sport Final SIRC SROI England Web report.

The social value of sport. Issued:19/04/16. Elements to take into consideration when evaluating SW value proposition (value of sport and recreation) Skills Active Sport & Recreation Industries Workforce Scan 2016 (paid & volunteer) Changing the Game Project. In February 2016 I was speaking at an all day workshop in Montrose CO, and as I was finishing my morning setup the participants began arriving. It was the usual collection of coaches, parents, city recreation administrators, city officials and some younger kids decked out in the gear of their respective sports team. Then another group of teenagers walked in with a gentleman that I figured must be their coach, although something about this group made me pause. They took a seat in the front of the room, and I went over and introduced myself, and had a great talk with a bunch of the kids and their coach Bryant.

I asked if they were all on a team together, and they said no, we live together. It turned out that these boys were from the Robert A. Physical inactivity cost the world $67bn in 2013 says first ever estimate. A world-first study has revealed that in 2013, physical inactivity cost INT $67.5 billion* globally in healthcare expenditure and lost productivity, revealing the enormous economic burden of an increasingly sedentary world. This study provides the first-ever global estimate of the financial cost of physical inactivity by examining the direct health-care cost, productivity losses, and disability-adjusted life years (DALYs) for five major non-communicable diseases attributable to inactivity: coronary heart disease, stroke, type 2 diabetes, breast cancer and colon cancer.

Clearinghouse : Economic Contribution of Sport. Introduction The measurement of the sport sector’s economic contribution to the broader Australian economy is multi-layered.