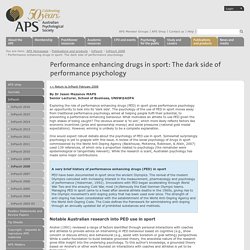 The psychology of the use of PED in sport moves away from traditional performance psychology aimed at helping people fulfil their potential, to preventing a performance enhancing behaviour. What motivates an athlete to use PED given the high stakes of being caught? The obvious answer is ‘to win', which more likely reflects factors like economic incentives (prize and sponsorship money) and social pressures (national gold medal expectations). However, winning is unlikely to be a complete explanation. One would expect robust debate about the psychology of PED use in sport.

Notable Australian research into PED use in sport Donovan, Egger, Kapernick and Mendoza (2002) used principles from social cognition to conceptualise a model for an athlete's decision to use PED. Conclusion. Royal Institution of AustraliaRiAus - Australia’s national science hub. World Anti-Doping Agency. Famous Olympic drug scandals : Reuters. Rio Olympics 2016: Russia escapes blanket ban by IOC: SMH. The Russian flag will be flying at the Summer Olympics in Rio de Janeiro after all, and the athletes from a nation mired in an ongoing drug scandal may be allowed to compete on the sporting world's largest stage. 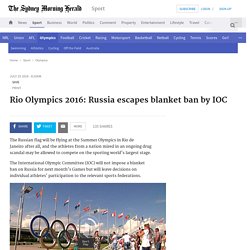 Russia doping scandal : The Guardian. Don’t poke the Bear: what could Russia do next about drugs in sport? theconversation. The World Anti-Doping Agency’s (WADA) release of Richard McLaren’s independent report on claims of systemic doping in Russia well and truly overshadows previous major sporting scandals such as the “Lance Bomb” (when Lance Armstrong’s doping was revealed) and the “blackest day in Australian sport” (when the Australian Crime Commission’s report on organised crime and doping was handed down, leading to years of political and sports controversies). 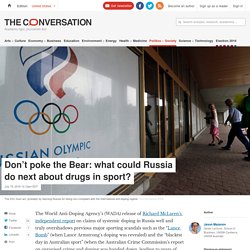 Where Russia broke the cardinal rule of doping – don’t get caught – the anti-doping regime has broken a cardinal rule of nature: don’t poke the Russian Bear. The International Olympic Committee (IOC) must act, probably by banning Russia as a non-compliant country. But it must also move cautiously, taking full account of the implications of doing so in terms of international politics, legal implications and financial implications (think broadcast rights in the Russian market). It may well be looking at other options now. Anti-doping crackdown is unleashing an unnecessary glut of scandals : theconversation. Anti-doping is in crisis. 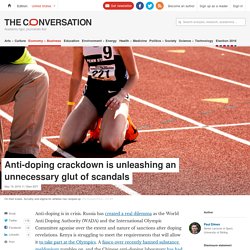 Russia has created a real dilemma as the World Anti Doping Authority (WADA) and the International Olympic Committee agonise over the extent and nature of sanctions after doping revelations. Kenya is struggling to meet the requirements that will allow it to take part at the Olympics. A fiasco over recently banned substance meldonium rumbles on, and the Chinese anti-doping laboratory has had its accreditation withdrawn. It seems that the tougher WADA try to be, the more scandals emerge, the less trust the public have in athletes, scientists, doctors and sports leaders. The stories of complicity and corruption at the highest level are enough to make the most enthusiastic flag waver feel cynical and despondent. The root of this crisis is in the 1960s: the time when anti-doping was given shape through new testing procedures and the first list of banned substances was made. But what made sense then is no longer viable: practically or idealistically.