Home - The Science of Sport 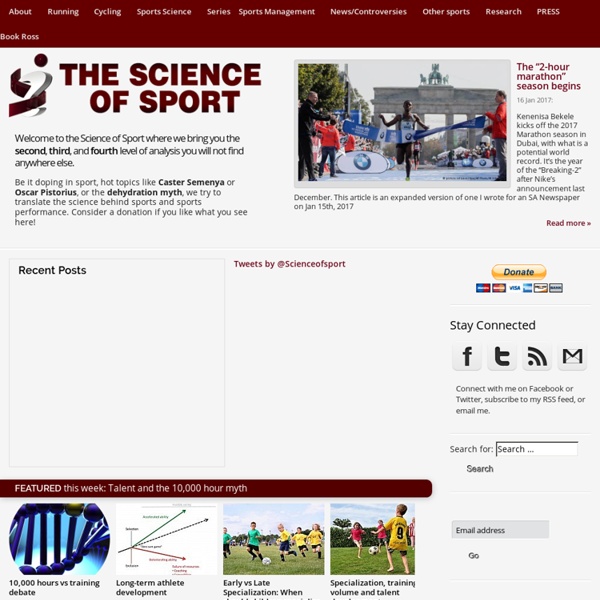 The Barefoot running round-table discussion from UKSEM Thoughts from the Barefoot running round-table discussion at UKSEM: Many of you will probably know by now that at the recent UKSEM conference in London, I chaired a session called “Natural Running – advantages and disadvantages. A Round Table Discussion”. The protagonists in the debate were: Prof Daniel Howell, an anatomy professor from Liberty (USA), known as the “barefoot professor”Simon Barthold, who formerly worked as a podiatrist but who now works in biomechanics and is Asics global research consultantProf Benno Nigg, one of the world’s leading biomechanistsDr Mathias Marquard, a clinician and running coach (who would go on to become the voice of reason in many of the more hostile aspects of the debate, as I’ll describe!) The debate concept That’s a pretty high-profile “cast”, including some of the world leaders in their fields. Controlling it, however, was a nerve-jangling prospect. Buy or sell? So from my vantage point, this is what I saw from the five responses: Back to the debate…

Natation pour tous : vidéos, cours et entraînements Should athletes be allowed to use performance enhancing drugs? Julian Savulescu, Uehiro chair in practical ethics1, Leon Creaney, consultant in sport and exercise medicine 2, Anna Vondy, ST6 emergency medicine3 Author Affiliations Correspondence to: J Savulescu julian.savulescu@philosophy.ox.ac.uk, L Creaney leon.creaney@uhb.nhs.uk Stories about illegal doping in sport are a regular occurrence. Julian Savulescu argues that rather than banning performance enhancing drugs we should regulate their use, but Leon Creaney and Anna Vondy say this would lead to escalating use and call for tougher enforcement The zero tolerance ban on doping has failed. According to Hermann and Henneberg, “Using typical values of detectability . . . the probability of detecting a cheater who uses doping methods every week is only 2.9% per test.”5 It is time for a different approach. Human nature It appears we reached the limits of human performance in sprinting about 15 years ago. Regulation could improve safety The strongest argument against doping is safety.

Sport.fr - Le site portail du sport What we can learn from Olympians about staying warm outside The first in a four-part series on physiological extremes encountered by Olympic athletes. If swimming were a Winter Olympic sport, Lewis Pugh would be a heavy favourite. The 44-year-old South African adventurer has completed long-distance swims at preposterously cold temperatures in every ocean, clad only in a Speedo, goggles and swim cap. Perhaps the most extreme: a one-kilometre swim in icy, 1.7 C water at the North Pole in 2007, which he completed in 18 minutes and 50 seconds. None of the events in Sochi, Russia, will take place underwater, but all the athletes have to overcome some combination of bitter cold, cutting wind, snow, ice and sleet in training and sometimes in competition. Simply surviving the conditions isn’t enough: Numb hands or a chilled core can be the difference between victory and defeat. In general, your body strives to keep its core temperature around 37 C, in order to keep your brain and heart running smoothly. Or you can try Pugh’s method.

Magazine Carnets d'Aventures Training to live with pain: What we can learn from Olympic athletes The second in a four-part series on physiological extremes encountered by Olympic athletes. The gold medal, we like to think, goes to whoever is willing to suffer a bit more than everyone else. So it’s odd that, when physiologists at the University of Wisconsin used spinal injections of a powerful painkiller to block lower-body pain in a group of cyclists, the cyclists actually got slower. They initially felt great and started out faster than normal, but then faded. Some of the most memorable Olympic moments involve athletes triumphing over pain: Silken Laumann’s improbable bronze in 1992, just 10 weeks after a horrific rowing accident; Slovenian cross-country skier Petra Majdic breaking five ribs and collapsing a lung just minutes before her qualifying heat in Vancouver 2010, then skiing through it – four times! “Pain is more than one thing,” explains Dr. For endurance athletes, pain at times seems like the central reality of their existence. To Dr. Special to The Globe and Mail

Running Café | La pause café du runner ! Why are elite athletes able to speed up when they see the finish line? The third in a four-part series on physiological extremes encountered by Olympic athletes. After five days and almost 250 kilometres of running through the shifting sands and hair-dryer heat of the Sahara Desert, Simon Donato had reached the limits of his physical endurance. The 37-year-old from Canmore, Alta., who travels the world competing in the most gruelling ultra-endurance races as co-host of the TV adventure series Boundless, knew he had to cover another 30 km to reach the finish line, but he could barely put one foot in front of the other. Then, as he staggered on, a strange thing happened: He began to speed up. Donato’s experience is hardly unusual. But it’s also puzzling. “Top-level athletes get closer and closer to their real physiological maximum,” says Dr. Marcora points to a classic study by French researcher Dr. Marcora believes our limits are dictated by an ever-changing balance between perceived effort and motivation. The difference, explains Dr.

la référence de la natation sur le Web By using our site, you consent to this privacy policy: This website allows third-party advertising companies for the purpose of reporting website traffic, statistics, advertisements, "click-throughs" and/or other activities to use Cookies and /or Web Beacons and other monitoring technologies to serve ads and to compile anonymous statistics about you when you visit this website. Cookies are small text files stored on your local internet browser cache. A Web Beacon is an often-transparent graphic image, usually no larger than 1 pixel x 1 pixel that is placed on a Web site. Both are created for the main purpose of helping your browser process the special features of websites that use Cookies or Web Beacons. The gathered information about your visits to this and other websites are used by these third party companies in order to provide advertisements about goods and services of interest to you.

What’s it take to perform like an Olympic athlete? It’s in the air (literally) The conclusion of a four-part series on physiological extremes encountered by Olympic athletes. Retired cross-country ski legend Bjorn Daehlie’s record tally of 12 Winter Olympic medals was matched last week by fellow Norwegian Ole Einar Bjoerndalen, who will attempt to dethrone Daehlie in the biathlon relays later this week in Sochi. There was much less fanfare two years ago, when Daehlie lost a more obscure title. Oxygen is the universal currency of athletic effort. Tests in the 1990s indicated that Daehlie had a maximal oxygen uptake, or VO2max, of 96 millilitres of oxygen per kilogram of body mass per minute. Identifying where the bottleneck occurs in this process is one of the most contentious topics in exercise physiology, with various lines of evidence pointing to the lungs, the heart, the muscles and even the brain. “These are the most fit people in the world, but their blood gas looks like someone who might present at an ICU,” says Dr.