Review: A comparison between the Inventist Solowheel version A and the Ninebot Uni E+ - Reviews & Impressions - Electric Unicycle Forum (euc community) The Science of Sport. 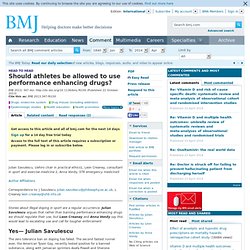 Julian Savulescu argues that rather than banning performance enhancing drugs we should regulate their use, but Leon Creaney and Anna Vondy say this would lead to escalating use and call for tougher enforcement The zero tolerance ban on doping has failed. According to Hermann and Henneberg, “Using typical values of detectability . . . the probability of detecting a cheater who uses doping methods every week is only 2.9% per test.”5 It is time for a different approach. Human nature It appears we reached the limits of human performance in sprinting about 15 years ago. Regulation could improve safety The strongest argument against doping is safety. What’s it take to perform like an Olympic athlete? It’s in the air (literally) The conclusion of a four-part series on physiological extremes encountered by Olympic athletes. 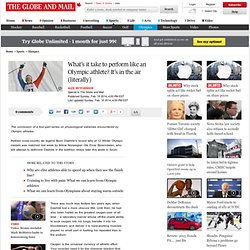 Retired cross-country ski legend Bjorn Daehlie’s record tally of 12 Winter Olympic medals was matched last week by fellow Norwegian Ole Einar Bjoerndalen, who will attempt to dethrone Daehlie in the biathlon relays later this week in Sochi. There was much less fanfare two years ago, when Daehlie lost a more obscure title.

Until then, he had also been hailed as the greatest oxygen-user of all time – a laboratory marvel whose off-the-charts ability to suck oxygen into his lungs, transfer it into his bloodstream, and deliver it to hard-working muscles played no small part in fuelling his repeated trips to the podium. Oxygen is the universal currency of athletic effort. Your muscles need it for the chemical reaction that converts food energy into motion, and those who use it best rise to the top. That doesn’t mean it’s impossible to improve your lungs.

Why are elite athletes able to speed up when they see the finish line? The third in a four-part series on physiological extremes encountered by Olympic athletes. 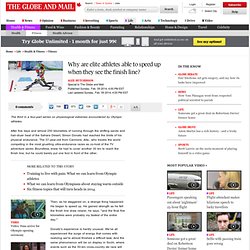 After five days and almost 250 kilometres of running through the shifting sands and hair-dryer heat of the Sahara Desert, Simon Donato had reached the limits of his physical endurance. The 37-year-old from Canmore, Alta., who travels the world competing in the most gruelling ultra-endurance races as co-host of the TV adventure series Boundless, knew he had to cover another 30 km to reach the finish line, but he could barely put one foot in front of the other.

Then, as he staggered on, a strange thing happened: He began to speed up. He gained strength as he felt the finish line draw nearer, he says, “and the final five kilometres were probably my fastest of the entire day.” Training to live with pain: What we can learn from Olympic athletes. The second in a four-part series on physiological extremes encountered by Olympic athletes. 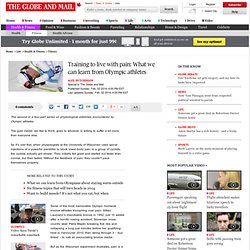 The gold medal, we like to think, goes to whoever is willing to suffer a bit more than everyone else. So it’s odd that, when physiologists at the University of Wisconsin used spinal injections of a powerful painkiller to block lower-body pain in a group of cyclists, the cyclists actually got slower. They initially felt great and started out faster than normal, but then faded. Without the feedback of pain, they couldn’t pace themselves properly. Some of the most memorable Olympic moments involve athletes triumphing over pain: Silken Laumann’s improbable bronze in 1992, just 10 weeks after a horrific rowing accident; Slovenian cross-country skier Petra Majdic breaking five ribs and collapsing a lung just minutes before her qualifying heat in Vancouver 2010, then skiing through it – four times!

“Pain is more than one thing,” explains Dr. To Dr. Special to The Globe and Mail. What we can learn from Olympians about staying warm outside. The first in a four-part series on physiological extremes encountered by Olympic athletes. 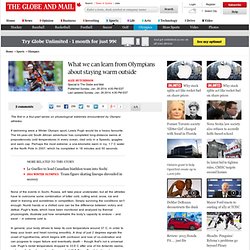 If swimming were a Winter Olympic sport, Lewis Pugh would be a heavy favourite. The 44-year-old South African adventurer has completed long-distance swims at preposterously cold temperatures in every ocean, clad only in a Speedo, goggles and swim cap. Perhaps the most extreme: a one-kilometre swim in icy, 1.7 C water at the North Pole in 2007, which he completed in 18 minutes and 50 seconds. None of the events in Sochi, Russia, will take place underwater, but all the athletes have to overcome some combination of bitter cold, cutting wind, snow, ice and sleet in training and sometimes in competition.

Simply surviving the conditions isn’t enough: Numb hands or a chilled core can be the difference between victory and defeat. In general, your body strives to keep its core temperature around 37 C, in order to keep your brain and heart running smoothly. Powered by Suunto.