Racism & other forms of discrimination 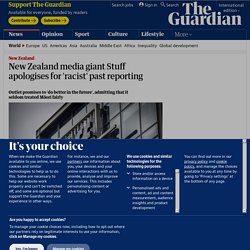 Its mea culpa follows an investigation by 20 of its journalists into its journalism throughout its history. The Black Lives Matter backlash is generating its own fake culture war. Pity the poor culture warrior, their mental gymnastics burning far more calories than pre-corona gym sessions ever could. 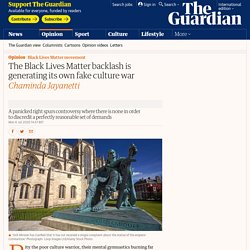 A statue was torn down, and they demanded people follow the proper channels. Statues were taken down via the “proper channels”, and they decried the panicked response. Reviews were announced to avoid a panicked response, and they raged against the reviews. Viewpoint: Why racism in US is worse than in Europe. Media playback is unsupported on your device News stories emerge almost daily in the US about police being called over black Americans doing nothing more than being black. 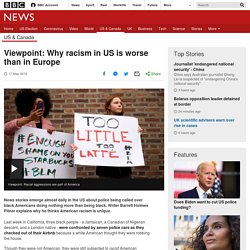 Writer Barrett Holmes Pitner explains why he thinks American racism is unique. Last week in California, three black people - a Jamaican, a Canadian of Nigerian descent, and a London native - were confronted by seven police cars as they checked out of their Airbnb because a white American thought they were robbing the house. Though they were not American, they were still subjected to racist American stereotypes - and being confronted with tense, potentially life-threatening altercations with police without ever committing a crime. I've travelled a fair amount around the world, but America's racist status quo remains unique and alarmingly oppressive. The Dictionary Definition of 'Racism' Has to Change. But the step is only short when the idea is still that discrimination, standing at the gate, is the essence of racism. 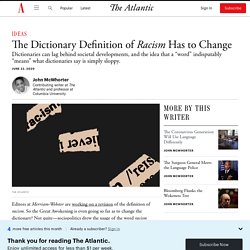 The progression from racism 2.0 to racism 3.0 is less typical as language change goes. The 3.0 usage implies that calling racial disparities “racism” is natural because it is indisputable that racial disparities stem from bias-infused barriers. For example, many argue that black people lag behind white people in health indexes because of inadequate access to health care and supermarkets. Long Island Merrick racism: Why the anti–Black Lives Matter protests were so heated. Among the many viral videos of nationwide protests against police brutality this past week was a clip of a tense scene from Merrick, New York, a mostly white town on Long Island. 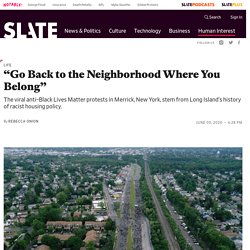 On Tuesday, residents tried to block 100 Black Lives Matter protesters from marching down Route 27A, yelling “Get them the hell out of here! Jürgen Klopp: 'Tony Yeboah had a big impact on German society' “I love the fact that we have so many African players … until the Africa Cup of Nations starts. 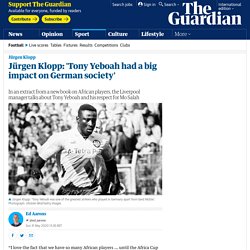 Then it’s: ‘Oh my God!’” Says Jürgen Klopp, breaking into his famous guffaw. Six weeks to the day since Liverpool’s victory over Tottenham in the Champions League ended his personal run of six straight defeats in major finals, Klopp is in his office at the club’s Melwood training ground. Marcus Thuram and Jadon Sancho both pay tribute to George Floyd after scoring. Jadon Sancho and Marcus Thuram sent out a powerful message of solidarity towards those protesting against the killing of George Floyd by American police, after scoring in their respective Bundesliga games on Sunday. 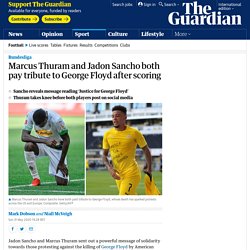 Both players followed up their on-field gestures with social media posts calling for change. The England winger revealed a slogan on his undershirt after scoring for Borussia Dortmund against Paderborn. This followed the Borussia Mönchengladbach forward Thuram taking a knee in a goal celebration earlier on Sunday, as his side beat Union Berlin. Sancho scored Dortmund’s second goal at Paderborn and then took off his shirt to reveal the message “Justice for George Floyd”. Michael Jordan condemns George Floyd death and 'ingrained racism' of US. Michael Jordan has released a statement on the death of George Floyd, condemning “ingrained racism” in the United States. 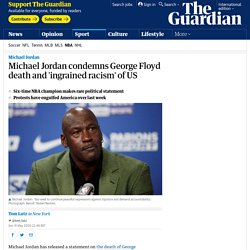 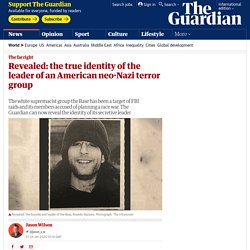 Members of the group stand accused of federal hate crimes, murder plots and firearms offenses, and have harbored international fugitives in recent months. Vile and disturbing Sofia spectacle will live long in sporting infamy. The Satanic Verses is still creating monsters, even new book-burners. Sometimes, you just have to shake your head to clear it and look again. 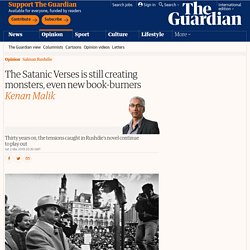 Ocasio-Cortez's critics babble and bluster … but can't ignore her. AOC is ignorant, ungrateful and coming for your meat Large swaths of America appear to be suffering from a debilitating condition known as Alexandria Ocasio-Cortez Derangement Syndrome (AOCDS). Symptoms include bouts of extreme condescension, an inability to stop sputtering the word “socialist”, and overwhelming anger that a young woman of colour is unapologetically succeeding. The latest conservative to succumb to AOCDS is Grace-Marie Turner, the president of a non-profit devoted to “counter[ing] the march towards toward government-controlled medicine”. (Can we just pause for a moment and contemplate what sort of person spends their life trying to ensure there will never be affordable healthcare in the United States?) The trip from London to Lincolnshire showed me the Brexit divide’s depth. Paris Saint-Germain admit to racially profiling young players.

Paris Saint-Germain have confirmed that their scouts illegally racially profiled young players as part of their recruitment process. They were asked to list whether the youngsters were French, north African, West Indian or African, allegedly in order to limit the number of black recruits, according to the investigative news website Mediapart, citing documents from the Football Leaks dossier. Collection of information on an individual’s race, religion or ethnicity is forbidden in France. From Seinfeld to bagels, it was always easy to be a Jew in America. What changed?

Recently a clutch of American relatives came to visit me in London.