5 things we learned from one of the world’s biggest surveys of young people. Young people feel that they’re not being listened to by global decision makers. 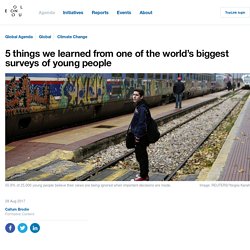 But with over half of the world’s population under the age of 30, it won’t be long before they will be making their voices heard. Almost 25,000 people aged between 18 and 35 from 186 countries and territories took part in the Global Shapers Annual Survey 2017. It showed that 55.9% of respondents believe their views are not being taken into account before important decisions are made. But young people’s influence will only get stronger as they occupy an increasing proportion of the global workforce, voter base and their consumer spending power grows.

The results of the survey, compiled by the World Economic Forum’s Global Shapers Community, offer an interesting insight into how young people view the world and its challenges. Governments, businesses and other institutions that ignore the current generation of young people do so at their peril. Here are five things we learned from the survey. Share. Global Issues Overview. What are the world's biggest problems? Which global issues should you work on to have the greatest impact? 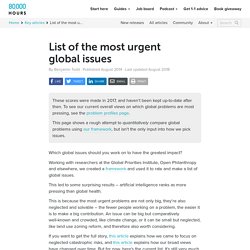 We’ve been working on this question for the last eight years, drawing together research from the University of Oxford’s Future of Humanity Institute; the Open Philanthropy Project (a foundation with billions of dollars of committed funds); the Copenhagen Consensus Center (a major think tank); and other groups. Using this research, we created a framework and used it to rate and make a list of global issues. This led to some surprising results – artificial intelligence ranks as more pressing than global health.

This is because the most urgent problems are not only big, they’re also neglected and solvable – the fewer people working on a problem, the easier it is to make a big contribution. An issue can be big but comparatively well-known and crowded, like climate change, or it can be small but neglected, like land use zoning reform, and therefore also worth considering. The 10 most critical problems in the world, according to millennials. A 16 foot high sculpture of a polar bear and cub, afloat on a small iceberg, passes in front of the Houses of Parliament on the River Thames on January 26, 2009 in London, England. 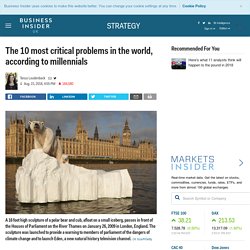 The sculpture was launched to provide a warning to members of parliament of the dangers of climate change and to launch Eden, a new natural history television channel.Oli Scarff/Getty Despite the dire state of the world today — and the stereotype that millennials' are selfish and apathetic — the generation aged 18 to 35 cares deeply about global issues, and they're determined to tackle them. In fact, 70% of millennials see plentiful opportunities for themselves and their peers, and 50% believe they can significantly contribute to decision making in their home country.

In one survey, WEF asked respondents to name the three most serious issues affecting the world today. For the second year in a row, millennials are most concerned by climate change, followed by large-scale wars and religious conflicts. 10. 9. 8. Global issue. Informally, a global issue describes any social, economic, political or environmental problem that affects the global community, possibly in a catastrophic way. 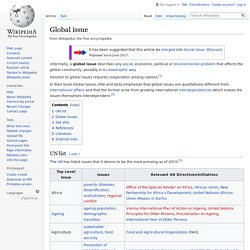 Solution to global issues requires cooperation among nations.[1] In their book Global Issues, Hite and Seitz emphasize that global issues are qualitatively different from international affairs and that the former arise from growing international interdependencies which makes the issues themselves interdependent.[2] UN list[edit] The UN has listed issues that it deems to be the most pressing as of 2015:[3] Global issues[edit] Theories like the world-system theory and the Gaia hypothesis focus on the inter dependency aspect of environmental and economic issues. No single issue can be isolated. See also[edit] References[edit] Global issues. Global Issues : social, political, economic and environmental issues that affect us all.

Learn About Our Global Issues. “I strongly believe that it will take the combination of a new method of global problem solving and a new mindset … Schools have a pressing responsibility in this regard to expose the next generations more systematically to these global problems and to help develop the new mindset that is needed — the ‘global citizens first’ mindset…tomorrow’s generations must develop a networking-oriented mindset if they are going to solve the burning global problems that stare us in the face.” – Jean Francois Rischard The Global Issues Network (GIN) Conferences empower young people to develop sustainable solutions to address global problems and to implement their ideas with the support of the network. 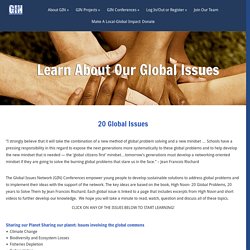 The key ideas are based on the book, High Noon- 20 Global Problems, 20 years to Solve Them by Jean Francois Rischard. Each global issue is linked to a page that includes excerpts from High Noon and short videos to further develop our knowledge.