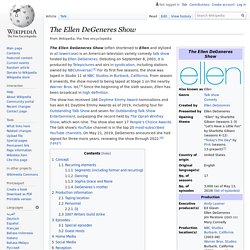 Debuting on September 8, 2003, it is produced by Telepictures and airs in syndication, including stations owned by NBCUniversal.[2] For its first five seasons, the show was taped in Studio 11 at NBC Studios in Burbank, California. From season 6 onwards, the show moved to being taped at Stage 1 on the nearby Warner Bros. lot.[3] Since the beginning of the sixth season, Ellen has been broadcast in high definition. The show has received 166 Daytime Emmy Award nominations and has won 61 Daytime Emmy Awards as of 2019, including four for Outstanding Talk Show and seven for Outstanding Talk Show Entertainment, surpassing the record held by The Oprah Winfrey Show, which won nine. The show also won 17 People's Choice Awards. The talk show's YouTube channel is in the top 20 most-subscribed YouTube channels. Significado de SUCCEED en el Diccionario Cambridge inglés. 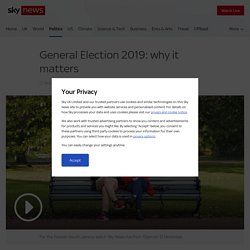 A reduplication of easy, the colloquial adjective easy-peasy means very straightforward and easy. 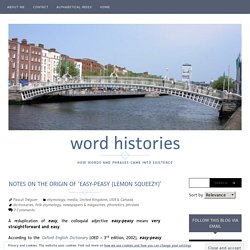 According to the Oxford English Dictionary (OED – 3rd edition, 2002), easy-peasy originated in British English; the earliest instance that the OED has recorded is from The Bookseller (London) of Saturday 22nd January 1966. But the earliest occurrence that I have found seems to invalidate that origin. It is from The Cincinnati Enquirer (Cincinnati, Ohio) of Saturday 17th January 1953, in the review by the American journalist Ellis Brownell Radcliffe (1904-77) of Breaking the Sound Barrier (1952), a British film about attempts by aircraft designers and test pilots to break the sound barrier, directed by David Lean, starring Ralph Richardson, Ann Todd and Nigel Patrick: SQEZY TV COMMERCIAL. To think deep - Recherche Google. We Say - You Say: Don't Cry Over Spilt Milk. We Say - You Say: Once bitten, twice shy. We Say - You Say: Don't Cry Over Spilt Milk.

Snack Attack - have got / has got. Hospitality jobs - Shop Supervisor. MIKE THE BARBER. Snack Attack - have got / has got. Male nurse. BBC Learning English - Friday Phrase / Have a frog in your throat. Prepositions: In, On, and At - ESL Gold. Clothes horse. Modern hanging clothes horse with pulley system A clothes horse, sometimes called a clothes rack, drying horse, clothes maiden, garment donkey, drying rack, scissor rack, drying stand, Frostick[citation needed], airer, or (Scots) winterdyke,[1] is a frame upon which clothes are hung after washing, indoors or outdoors, to dry by evaporation. 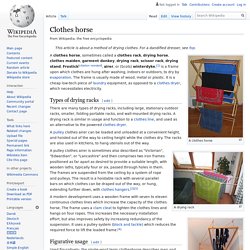 The frame is usually made of wood, metal or plastic. It is a cheap low-tech piece of laundry equipment, as opposed to a clothes dryer, which necessitates electricity. BBC - The Social, Scotland, Raymond Reviews: Italy. Japanese women demand right to wear glasses at work. Japanese women on social media are demanding the right to wear glasses to work, after reports that employers were imposing bans. 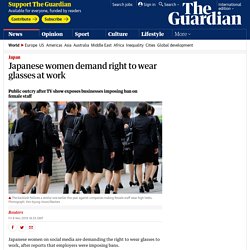 In the latest protest against rigid rules over women’s appearance, the hashtag “glasses are forbidden” was trending on Twitter in reaction to a Japanese television show that exposed businesses that were imposing the bans on female staff. “These are rules that are out of date,” one Twitter user said, while another described the reasons given by employers as “idiotic”. One woman who works in restaurants tweeted that she was repeatedly told not to wear her glasses because it would appear “rude” and they did not go with her traditional kimono.

“If the rules prohibit only women to wear glasses, this is a discrimination against women,” Kanae Doi, the Japan director at Human Rights Watch, told the Thomson Reuters Foundation on Friday. Earlier this year there was a call for Japanese companies to stop forcing female staff to wear high heels. Jeopardy Jeopardy Template. Idioms Quiz. Task description & scene summary Task description: Time, money and food idioms. 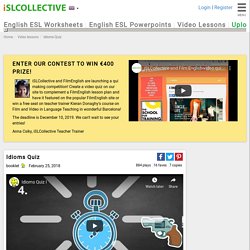 Watch animations and explanations of some idioms. Guess the idioms and use them in sentences. BBC Learning English - Lingohack / The woman who swims inside icebergs. Ratatouille - The passive form. Halloween in The USA - Video Listening Quiz. Wheelchair costumes turn kids into superheroes. Ryan Weimer: Normally there’s this awkwardness around disability. 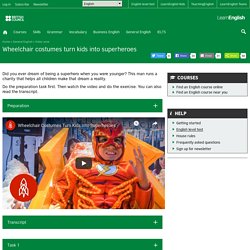 But with that costume on there, that changed how people saw my son. They saw him first before they saw his disability. It just helps break down that barrier. Halloween Scares up Tricks, Treats in US. ESL Quizzes - Raise or Rise? Noun and verb syllable stress. Some nouns and verbs have the same form in English. 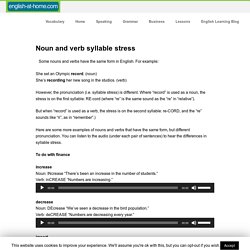 For example: She set an Olympic record. THE CROWN: Season 1 Clip - "Fog" Now on Blu-ray & DVD! World Economic Forum - The EU is making it easier to fix your washing machine that throw it away. Cambridge University Press España - Significados de FAIR. Top stories in 90 seconds. We use cookies to improve our service for you. 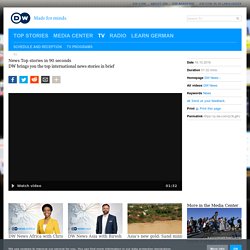 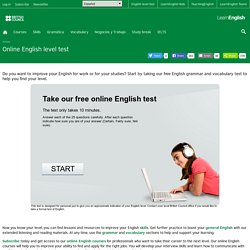 Get further practice to boost your general English with our extended listening and reading materials. At any time, use the grammar and vocabulary sections to help and support your learning. Subscribe today and get access to our online English courses for professionals who want to take their career to the next level. Our online English courses will help you to improve your ability to find and apply for the right jobs. You will develop your interview skills and learn how to communicate with confidence in the workplace. BBC Learning English - Course: English In A Minute / Unit 1 / Session 9 / Activity 1. Learn english, English grammar, English. Eating insects. Presenter: Every resort town in the US has a candy store, but one store in Pismo Beach, California, goes beyond the usual taffy and caramel apples. If Hotlix has its way, Americans will be snacking on everything from caterpillars and cockroaches to mealworm-covered apples.

Larry Peterman is a candyman on a mission. For more than a decade he’s been promoting a valuable food source that most Americans find revolting. In a land of plenty, people resist. Larry knows why. Slide 3. David Crystal - World Englishes. Page Unavailable - BBC Worklife. Social Media Time Alternatives - Omni Calculator. Using Facebook or Twitter does not require much energy, you just turn on your phone or type the address in your browser. We crave the information that is inside timelines and walls. And when something is easy to get, it quickly becomes our second nature.

Relief comes fast when you find out about everything that happened while you were offline, even if it was just five minutes ago. Other studies, quoted by The Guardian, compared social media to gambling. Every shared photo, link or post is a gamble on how many likes one can get. BBC Learning English - Lingohack / Meet Britain's first trainee guide pony. English Language Learning Tips - Varieties of English. Song Pieces! Adding Novelty to ELT – Song Activity Factory.

American Airlines passengers’ shock as traveller takes miniature HORSE onto flight. AMERICAN Airlines passengers were left stunned after noticing a miniature HORSE had joined their flight. Evan Nowak said he noticed the animal, which had been brought onboard by a fellow traveller, while flying on an a service from Chicago to Omaha. He posted the footage to Twitter, which showed the horse calmly sitting near the front of the plane in an aisle seat. He added: "At this time we would like to begin boarding with any active duty military, families travelling with children under the age of 3, and horses... " Another passenger, Amberley Babbage, also spotted the animal at check in, tweeting: "There was a small horse in line at the airport today and I’m so curious about it.