Dogs Never Die. They are Sleeping in Your Heart. Tyr The Ovcharka. The Dogs of Chernobyl - The Dogington Post. Chow Chow Heartbeat, Dog Sticker. Products from WOW DECAL. Dogs Can Actually Understand What You're Saying to Them, Study Says. Limited Edition. Limited Edition. Www.PetHarbor.com pet:RVSD.A1504019. 'Dog Park Debbie' calls police on man whose dog mounted her dog at a park - VT.

In Attleboro, Massachusetts, a woman called 911 because a man's pit bull mounted her dog at a dog park. 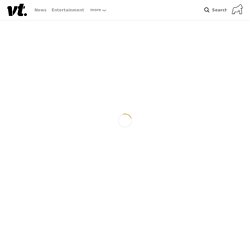 The man, identified as 42-year-old Franklin Baxley, who is black, uploaded footage of their heated exchange on social media. "Why did this lady just call the cops on me claiming my dog 'assaulted' her dog when it tried to hump her dog? " he asked on Facebook. Is That a Real Service Dog (Or Is It Someone's Pet)? - The Dogington Post. Teenage Elephants need a father figure.

Why Dogs Matter. Why dogs matter, what's a dog worth "I love my dog because she is" One of my favorite books by the late British philosopher and animal advocate Dr. 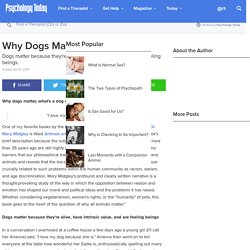 Mary Midgley is titled Animals and Why They Matter. Dogs really can smell your fear, and then they get scared too. Gary John Norman/Getty By Jake Buehler Dog owners swear that their furry best friend is in tune with their emotions. 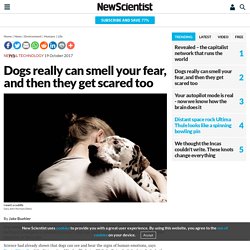 Now it seems this feeling of interspecies connection is real: dogs can smell your emotional state, and adopt your emotions as their own. Science had already shown that dogs can see and hear the signs of human emotions, says Biagio D’Aniello of the University of Naples “Federico II”, Italy. Horses Had Dentists 3,000 Years Ago. Just like humans, horses can have tooth problems that make them ornery and sap their productivity. 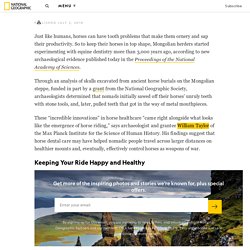 So to keep their horses in top shape, Mongolian herders started experimenting with equine dentistry more than 3,000 years ago, according to new archaeological evidence published today in the Proceedings of the National Academy of Sciences. Through an analysis of skulls excavated from ancient horse burials on the Mongolian steppe, funded in part by a grant from the National Geographic Society, archaeologists determined that nomads initially sawed off their horses’ unruly teeth with stone tools, and, later, pulled teeth that got in the way of metal mouthpieces. These “incredible innovations” in horse healthcare “came right alongside what looks like the emergence of horse riding,” says archaeologist and grantee William Taylor of the Max Planck Institute for the Science of Human History. Keeping Your Ride Happy and Healthy. Dogs and Humans Have Similar Social and Emotional Brains. TGIF (Thank Goodness It’s Friday)! 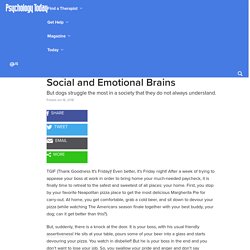 Even better, it’s Friday night! After a week of trying to appease your boss at work in order to bring home your much-needed paycheck, it is finally time to retreat to the safest and sweetest of all places: your home. First, you stop by your favorite Neapolitan pizza place to get the most delicious Margherita Pie for carry-out. At home, you get comfortable, grab a cold beer, and sit down to devour your pizza (while watching The Americans season finale together with your best buddy, your dog; can it get better than this?). But, suddenly, there is a knock at the door. Unfortunately, the nightmare is not over that night. Giant Weed Spreading Across North America Can Cause Third Degree Burns And Blindness If Touched. People are being cautioned to be on the lookout for Giant hogweed, a plant with toxic sap that can cause third degree burns and even blindness. 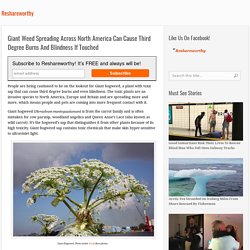 The toxic plants are an invasive species to North America, Europe and Britain and are spreading more and more, which means people and pets are coming into more frequent contact with it. Giant hogweed (Heracleum mantegazzianum) is from the carrot family and is often mistaken for cow parsnip, woodland angelica and Queen Anne’s Lace (also known as wild carrot). It’s the hogweed’s sap that distinguishes it from other plants because of its high toxicity. Edutopia. Dogs Use Various Gestures To Get What They Want From Us. Dogs have formed unique relationships with humans due to their close association with us, as they became the nonhuman animals (animals) we know today (link is external). 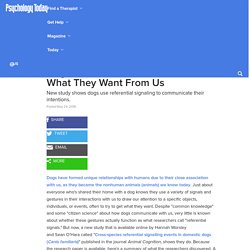 Just about everyone who's shared their home with a dog knows they use a variety of signals and gestures in their interactions with us to draw our attention to a specific objects, individuals, or events, often to try to get what they want. Despite "common knowledge" and some "citizen science" about how dogs communicate with us, very little is known about whether these gestures actually function as what researchers call "referential signals. " But now, a new study that is available online by Hannah Worsley and Sean O’Hara called "Cross-species referential signalling events in domestic dogs (Canis familiaris) (link is external)" published in the journal Animal Cognition, shows they do. Because the research paper is available, here's a summary of what the researchers discovered. Methods of study, data analysis, and results. 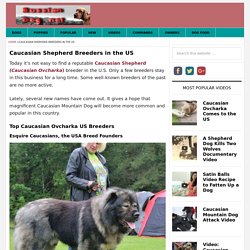 Only a few breeders stay in this business for a long time. Some well-known breeders of the past are no more active. Excessive Limb Licking in Dogs – Misdiagnosed as Allergies? – Animal Energy Therapies. Sweet Chow Chow Cries When Seeing Mom on FaceTime [Video] Medium Dog Wheelchair for Pets 25-69 Lbs. Sizing 1. 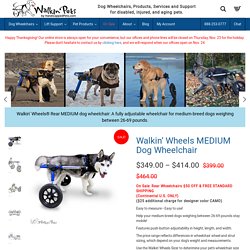 Measure the fold of flank of your pet laying down to the toe pad, as shown here. Do not pull the leg tight; leave some natural bend. The Fold of the Flank (FOF) is a thin piece of skin that connects the dog’s upper rear leg to his body. Carter and Toby plus Max (@carterandtoby) How to make Homemade PupLoaf. Over the years I have made many versions of puploaf. 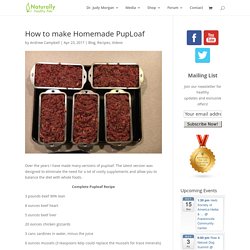 When a kind-hearted woman brought her home and introduced her to her rescue dog, it was love at first sight. Meet Crenshaw the kitten! Courtesy: Sharra Platt. Trigger stacking: how we set our dogs up to fail – Woof Like To Meet. When we adopt a dog, what we expect is for them to be happy. We like to think that they get what’s happening and that it’s all blooming marvellous.

Africa’s Top Riding Safari Guides Q&A - Aardvark Safaris. A riding safari in Africa is a superb and exciting way to view Africa’s beautiful wildlife. The landscape and terrain is as varied as the animals ensuring that all abilities can be looked after, and there is always somewhere new to explore. We asked five of Africa’s top riding safari guides five quick questions. Gordie Church – Safaris Unlimited, Kenya Born and brought up in Kenya, Gordie has spent most of his life in the bush leading riding safaris through the stunning conservancies bordering the Masai Mara and in Laikipia in the Central Highlands, a stunning region of Kenya renowned for its diverse and beautiful landscape and abundant wildlife. The Masai Mara always promises excellent wildlife viewing and this is taken to another level with the arrival of the herds of wildebeest during the annual migration between July and October every year. 1. You Know More Than You Think You Do.

"Of course dogs love," they would quickly reply.