The magnifying glass: how Covid revealed the truth about our world. What might be the enduring symbol of the coronavirus that turned our world upside down in 2020? 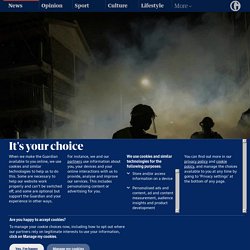 Might it be those Thursday evenings of spring and summer when, at the stroke of 8pm, Britons overcame the national traits of embarrassment and reserve and ventured out on to the doorstep to applaud doctors, nurses and key workers, banging saucepans and nodding to neighbours in a synchronised “clap for carers”? Or might it be the first sign that trouble was coming this way, that footage of Italians singing to each other from their balconies in a ritual that seemed as exotic, distant and unlikely then as the very notion of a “lockdown”, back before that dramatically punitive word lost its sting?

A chequerboard computer screen of faces as Zoom became the prime means of face-to-face contact with those who didn’t live under one roof? The smaller, quieter sight of families visiting grandparents but getting no further than the garden path, toddlers waving through the glass at elderly relatives? Neil Postman's advice on how to live the rest of your life - Austin Kleon. The Literal Translation Of Every Country's Name, Mapped.

AP Research. Beyond literary analysis. BreakoutEDU. Citation. Easter. Gamification Talk. Image Resources. Knowledge Bible Posters. Literature databases. Mentor texts: images. Mythology. Narrative. Odyssey. Perception. Race. Sleep. Sound resources. Women. Home - The Schoyen Collection. Attention hacking is the epidemic of our generation… Variable rewards … also know as “The virtual slot machine” In 1930, B.F. Skinner, a psychologist at Harvard University placed a rat inside a box. The box had a lever that would, once pressed, make some food drop. After knocking the lever a couple of times by accident, the rat learned: whenever he would be in that box again, he would go straight to the lever and press it.

Skinner deduced that this type of environmental conditioning could be applied to anyone, including humans. Now here comes the interesting part: in further experiments, B.F. Have you ever mechanically opened Facebook just to check if you have new notifications? The Tyranny of Convenience. Are You a Curator or a Dumper? How Important is it to Love Your Job? Much has been touted about how important it is to find a job you love. 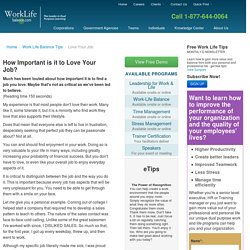 Maybe that's not as critical as we've been led to believe. (Reading time 150 seconds) Customer reviews: BIC For Her Retractable Ball Pen, Medium Point, 1.0 mm, Black Ink, 2 Count (FHAP21-Black) How to Become World-Class at Anything – Personal Growth. When I was 16, I performed relatively poorly in my GCSE exams, exams which every kid in the UK takes. 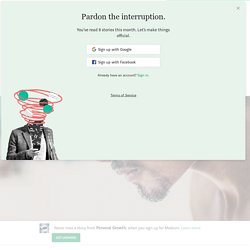 Having missed most of my classes, and barely studied, I received a D in math and an F for French (which I think is funny). I’m a little embarrassed to even write about this, and I’ll try to redeem myself by letting you know that four of my nine grades were C: for physics, biology, English language, and English literature. Any small success I had was basically down to luck, and it was terrifying to take those exams with no preparation. It’s only in the last few years that I stopped having nightmares about it. This is when I hit rock-bottom, a pivot point at which I decided to turn my life around.

By the time I was 16, the headmaster (principal) of my school had decided, because I had been performing so poorly, that I did not have an academic temperament. How HyperDocs Can Transform Your Teaching. Jezebel. Kidnapped as Schoolgirls by Boko Haram: Here They Are Now. Yola, Nigeria — The list had more than 200 names. Martha James. Grace Paul. Rebecca Joseph. Mary Ali. Ruth Kolo. It took Nigerian officials agonizing weeks to publish the names of all the students Boko Haram kidnapped from a boarding school in the village of Chibok four years ago, on the night of April 14.

This post originally appeared on the blog My University Prep. 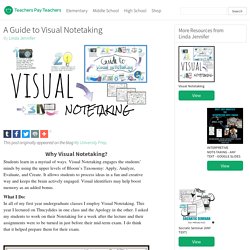 Students learn in a myriad of ways. Visual Notetaking engages the students’ minds by using the upper levels of Bloom’s Taxonomy: Apply, Analyze, Evaluate, and Create. It allows students to process ideas in a fun and creative way and keeps the brain actively engaged. Visual identifiers may help boost memory as an added bonus. What I Do: In all of my first year undergraduate classes I employ Visual Notetaking. 46 Most Intellectually Stimulating Sites That Will Spark Your Inner Genius in 10 Minutes a Day. Curiosity has a lot to do with getting smarter. 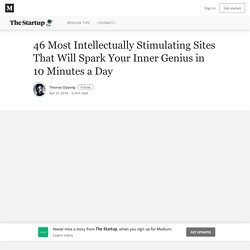 Learning is not just limited to the classroom anymore. It’s a life-long process that can enrich your knowledge every day. And the good news is that you access free online resources anywhere to help you grow. Your career, and personal life will never be the same if you can commit to some of these awesome resources in just ten minutes a day.

How to Raise a Boy – The Cut. 3 Surprising Reasons Students Don't Get into Top Colleges. Organizing Mentor Texts. Hiroki Takeda. Your Kids Are Probably Not Going to the Ivy League. So What?