The man who taught Uber how to say sorry. Morrisons and Waitrose ditch glitter for Christmas. Malaysian children as young as 12 are getting married, and it’s legal. Authors call for removal of Booker prize vice-president over 'homophobic' views. Damian Barr is leading a charge of writers, including one former Booker prize winner, who are calling on the Booker Foundation to remove the allegedly “homophobic” peer Emma Nicholson from her position as vice-president. 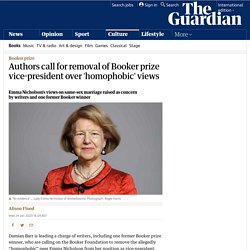 Lady Nicholson of Winterbourne, who voted against the same-sex marriage bill in 2013, is the widow of the late former chairman of Booker, Sir Michael Caine, who helped establish the prize. She is currently a vice-president of the Booker Foundation, and a former trustee of the prize. Barr, a novelist, memoirist and host of the Literary Salon, learned of her association with the prize earlier this week, after Munroe Bergdorf, the model and transgender activist, said she was referring Nicholson to the Parliamentary Standards Conduct Commissioner over Nicholson’s posts on social media about the trans community. The peer also drew fire earlier this month over her views on same-sex marriage. Coronavirus crisis exposes harsh existence of Hong Kong’s poorest households. How Maps Can Distort Space and Deceive Us. Maps have become increasingly present in our everyday lives, and with new technology, maps are more and more accessible to view and to produce. 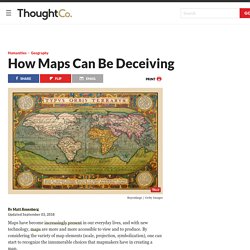 By considering the variety of map elements (scale, projection, symbolization), one can start to recognize the innumerable choices that mapmakers have in creating a map. Why Maps Are Distorted One map can represent a geographical area in many different ways; this reflects the various ways in which mapmakers can convey a real 3-D world on a 2-D surface. Do Maps Lie. How Maps Lie. What’s the best piece of journalism you read this year? (No politics) ‎BrainStuff: Could Your Next Car Say 'No' to Drunk Driving? on Apple Podcasts. The accidental Singer sewing machine revolution. Image copyright Getty Images Gillette adverts stand against toxic masculinity. 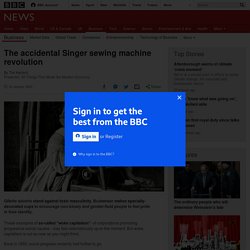 Two States. Eight Textbooks. Two American Stories. We analyzed some of the most popular social studies textbooks used in California and Texas. 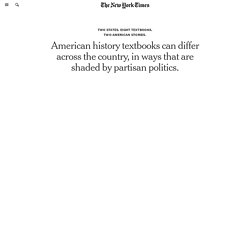 Here’s how political divides shape what students learn about the nation’s history. CES 2020: The biggest surprises from big tech at the show. Reading The Markets — Machine Learning Versus The Financial News. Podcast. The World in 50 Years. Neal.fun.

How has my country voted at the UN? Hong Kong’s huge protests, explained. I felt the fear of abduction by China in Hong Kong. Appeasing Bejing has to stop. When I moved to Hong Kong in 1987, after my books had been permanently banned by the Chinese government, the territory’s distinctive character was immediately obvious. 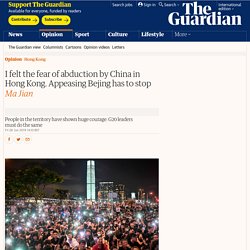 The pungent, salty air smelt of freedom. In China’s huge city boulevards and vast deserts and mountains, my thoughts always felt imprisoned, but in Hong Kong’s narrow streets and tiny, cramped bookshops they were set free and given infinite space to wander. Welcome the Future - Extended. 'They're kids, not rioters': new generation of protesters bring Hong Kong to standstill. A sea of protesters, most dressed in black and carrying white flowers of mourning, have swept through central Hong Kong to denounce a controversial extradition law and demand that the city’s leader, Carrie Lam, steps down. 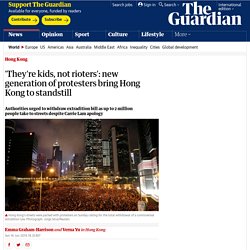 Organisers claimed that nearly 2 million people turned out on Sunday, which would make the demonstration the largest in Hong Kong’s history. They poured in from all over the city, in numbers so large that the march route had to be extended, and then widened, halting all traffic outside government headquarters. Echoes of protest songs, hymns and chants bounced off the surrounding high rises as darkness fell and then into the evening, hours after the early afternoon start of the protest, which remained peaceful throughout. It was an extraordinary show of grassroots political power in a city where residents cannot choose their leaders but are free to take to the streets to denounce them.

How to Think References. Perspectives. Problems needing a solution. Presentation Skills. Researching Resources. Thinking. TOK. Misinformation on social media: Can technology save us? If you get your news from social media, as most Americans do, you are exposed to a daily dose of hoaxes, rumors, conspiracy theories and misleading news. 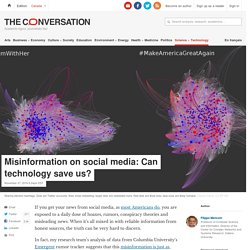 When it’s all mixed in with reliable information from honest sources, the truth can be very hard to discern. In fact, my research team’s analysis of data from Columbia University’s Emergent rumor tracker suggests that this misinformation is just as likely to go viral as reliable information. Many are asking whether this onslaught of digital misinformation affected the outcome of the 2016 U.S. election. The truth is we do not know, although there are reasons to believe it is entirely possible, based on past analysis and accounts from other countries. Researchers Link Syrian Conflict to a Drought Made Worse by Climate Change. Drawing one of the strongest links yet between global warming and human conflict, researchers said Monday that an extreme drought in Syria between 2006 and 2009 was most likely due to climate change, and that the drought was a factor in the violent uprising that began there in 2011.

The drought was the worst in the country in modern times, and in a study published Monday in Proceedings of the National Academy of Sciences, the scientists laid the blame for it on a century-long trend toward warmer and drier conditions in the Eastern Mediterranean, rather than on natural climate variability. The researchers said this trend matched computer simulations of how the region responds to increases in greenhouse-gas emissions, and appeared to be due to two factors: a weakening of winds that bring moisture-laden air from the Mediterranean and hotter temperatures that cause more evaporation. Colin P. Dr. Martin P. “The paper makes a strong case for the first link in their causal chain,” Dr. Do we need black people on our banknotes? Usually, when a new campaign to rectify our national failure to acknowledge black ingenuity in building modern Britain comes along, I support it enthusiastically. 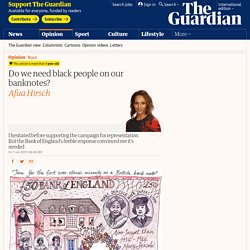 I’ve backed the critique of our statues, for example, which promote white supremacists as heroes and ignore people of colour; and of our curriculum, which promotes ignorance about the racialised nature of British history. I’ve seen the need for a museum of empire, and the importance of books such as Washington Black, which told the fictional story of a black inventor erased from the historical record. The children growing up in a ‘motherless village’ In eastern Indonesia there are areas where almost all young mothers have gone to work abroad. 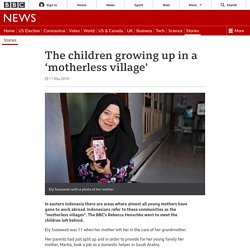 Indonesians refer to these communities as the "motherless villages". The BBC's Rebecca Henschke went to meet the children left behind. Ely Susiawati was 11 when her mother left her in the care of her grandmother. Her parents had just split up and in order to provide for her young family her mother, Martia, took a job as a domestic helper in Saudi Arabia. Celeste Headlee: 10 ways to have a better conversation. China’s hi-tech war on its Muslim minority. In mid-2017, Alim, a Uighur man in his 20s, returned to China from studying abroad. 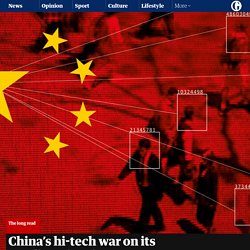 As soon as he landed back in the country, he was pulled off the plane by police officers. He was told his trip abroad meant that he was now under suspicion of being “unsafe”. The police administered what they call a “health check”, which involved collecting several types of biometric data, including DNA, blood type, fingerprints, voice recordings and face scans – a process that all adults in the Uighur autonomous region of Xinjiang, in north-west China, are expected to undergo. After his “health check”, Alim was transported to one of the hundreds of detention centres that dot north-west China. The mathematics of sidewalk illusions - Fumiko Futamura.

When You Don’t Love Your Job. “What do you do?” The Neuroscience of Music, Mindset, and Motivation. Source: article continues after advertisementWhat songs evoke a strong emotional response or inspire you? Do you have a theme song that captures the essence of 2012? As simple as it sounds, scientists have found that listening to particularly happy or sad music changes the way we perceive the world. The Short Sentence as Gospel Truth.

Alisa Miller: The news about the news. Education Data. In our current world, it is usually assumed that those holding a position of power have the responsibility to call conflicting parties to the negotiation table. Peace brokers, such as the United States, European countries, Russia, or some other “strong nation,” will engage in diplomatic gymnastics to prepare conflicting parties for negotiations through the “Track I” approach—via professional diplomats or governmental authorities.