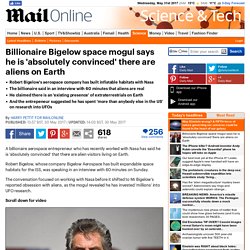 Robert Bigelow, whose company Bigelow Aerospace has built expandable space habitats for the ISS, was speaking in an interview with 60 minutes on Sunday. The conversation focused on working with Nasa before it shifted to Mr Bigelow's reported obsession with aliens, as the mogul revealed he has invested 'millions' into UFO research. New Study suggests Alien Civilizations may number in TRILLIONS – EWAO.

“We really do know that pretty much every star in the sky hosts at least one planet…” – astronomer Adam Frank. 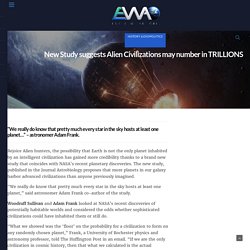 Rejoice Alien hunters, the possibility that Earth is not the only planet inhabited by an intelligent civilization has gained more credibility thanks to a brand new study that coincides with NASA’s recent planetary discoveries. The new study, published in the Journal Astrobiology proposes that more planets in our galaxy harbor advanced civilizations than anyone previously imagined.

“We really do know that pretty much every star in the sky hosts at least one planet,” said astronomer Adam Frank co-author of the study. Woodruff Sullivan and Adam Frank looked at NASA’s recent discoveries of potentially habitable worlds and considered the odds whether sophisticated civilizations could have inhabited them or still do. According to Frank, the potential number of planets orbiting their host star within a habitable distance is staggering. fp The fraction of those stars with planetary systems. Bodies of Alien Creatures in the Hands of American Authorities. Cosmic Conversation Bob Dean. The DeLonge DeLusion: Part Two. In Part One of this article, I argued that former pop-punk-singer-turned-UFO-Disclosure-icon Tom DeLonge is being used as an unwitting conduit for disinformation and soft propaganda in support of the US national security state. 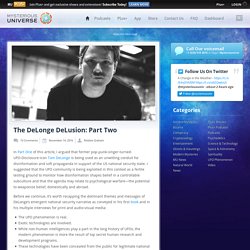 I suggested that the UFO community is being exploited in this context as a fertile testing ground to monitor how disinformation shapes belief in a controllable subculture and that the agenda may relate to psychological warfare—the potential to weaponize belief, domestically and abroad. Before we continue, it’s worth recapping the dominant themes and messages of DeLonge’s emergent national security narrative as conveyed in his first book and in his multiple interviews for print and audio-visual media: DeLonge has also consistently hinted at a ‘non-human’ influence behind the UFO enigma, but has thus far refused to specify the nature and origin of this influence as described to him by his mysterious ‘advisors.’ Listen carefully… that ringing sound, do you hear it? I-Team: Rock star plans for announcement on UFOs - Story. LAS VEGAS - Can a rock star do what generations of investigators have failed to manage -- that is, find out what the government knows about UFOs? 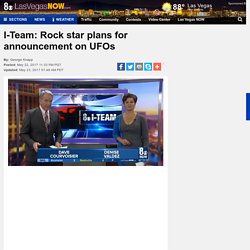 Last year, Tom DeLonge, the co-founder of Blink 182, told the I-Team about his plans to create a multi-media empire based on inside information given to him by military sources he had cultivated. Since then, DeLonge has taken some lumps, and his grand plan was nearly crushed by the WikiLeaks disclosures. The rock star life was good for Tom DeLonge. he had millions of fans, sold millions of records, and would occasionally mention his obsession in song lyrics. Copyright 2017 Nexstar Broadcasting, Inc. All rights reserved. British Government will Release its Secret UFO Files.

50 years of collected UFO data and activity held by the British Ministry of Defence (MoD) is being published after the June election next month. 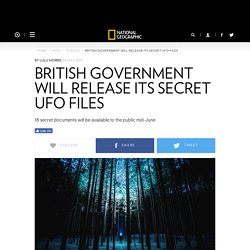 The secret dossier will reveal 18 documents held back after the information needed to be re-examined by the MoD. Withholding this classified information classified information has reignited claims of a government cover-up of possible alien sightings. The delay in releasing this information was due to the UK elections at the time, forcing the information to be put off years at a time. A letter sent from a spokesperson for the National Archive wrote: Due to the upcoming election here in the UK and the rules relating to government departments during the pre-election period, the files will not be released until after the election, we are working to ensure that the files are ready for release as soon after this period as is possible: hopefully around the middle of June. 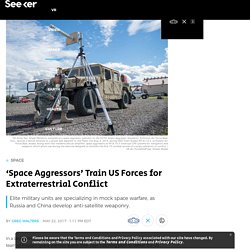 This spring, rhetoric from US military officials about the need to bolster American defensive position, and even offensive capabilities, in space has ratcheted up amid concern that Russia and China are rapidly developing anti-satellite weapons. “While we’re not at war in space, I don’t think we could say we’re exactly at peace, either,” Vice Admiral Charles Richard, Deputy Commander of U.S. Strategic Command, known as Stratcom, told a conference in Washington DC in March. Transcript of Interview with Bob Dean, March 24, 1996. Welcome back to Award-winning 21st Century Radio’s Hieronimus & Co. 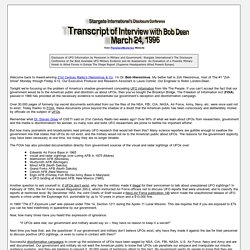