Cannabis-enhancing plant to be marketed worldwide as new drug. South African Bushmen have been chewing kanna (Sceletium tortuosum) for hundreds of years to reduce stress, relieve hunger and elevate their moods. 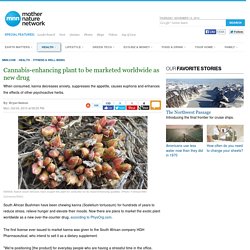 Now there are plans to market the exotic plant worldwide as a new over-the-counter drug, according to PhysOrg.com. The first license ever issued to market kanna was given to the South African company HGH Pharmaceutical, who intend to sell it as a dietary supplement. How to make THC Pills. Introduction. 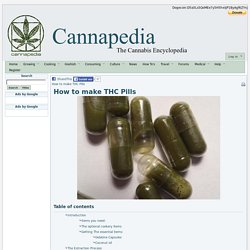 Research Says Cannabis Affects Intestinal Flora And May Prevent Obesity. Canadian researchers have recently published a study that shows the potential cannabis has for preventing and treating obesity. 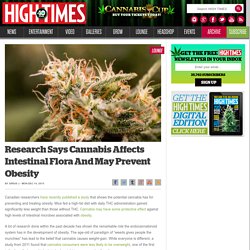 Mice fed a high-fat diet with daily THC administration gained significantly less weight than those without THC. First of its Kind Study Finds Virtually No Driving Impairment Under the Influence of Marijuana. As cannabis prohibition laws crumble seemingly by the day, it’s allowing more research to be performed on this psychoactive substance that has long been a part of the human experience. 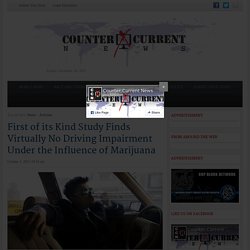 The first study to analyze the effects of cannabis on driving performance found that it caused almost no impairment. The impairment that it did cause was similar to that observed under the influence of a legal alcohol limit. Researchers at the University of Iowa’s National Advanced Driving Simulator carried out the study, sponsored by National Highway Traffic Safety Administration, National Institute of Drug Abuse, and the Office of National Drug Control Policy. “Once in the simulator—a 1996 Malibu sedan mounted in a 24-feet diameter dome—the drivers were assessed on weaving within the lane, how often the car left the lane, and the speed of the weaving. Marijuana (Sex) is Safer Than Alcohol (Sex) Marijuana is safer than alcohol has been a prominent battle cry among many cannabis law reformers for years now. 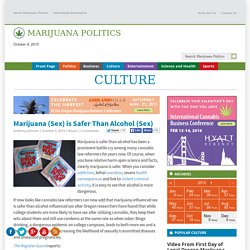 Of course, when you base relative harm upon science and facts, clearly marijuana is safer. When you consider addiction, lethal overdose, severe health consequences and link to violent criminal activity, it is easy to see that alcohol is more dangerous. Teen marijuana use not linked to later depression, lung cancer, other health problems, study finds: Study contradicts some prior marijuana research. Chronic marijuana use by teenage boys does not appear to be linked to later physical or mental health issues such as depression, psychotic symptoms or asthma, according to a study published by the American Psychological Association. 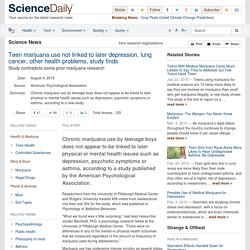 Researchers from the University of Pittsburgh Medical Center and Rutgers University tracked 408 males from adolescence into their mid-30s for the study, which was published in Psychology of Addictive Behaviors. UCLA Professor Finds Marijuana Is Safer to Smoke Than Tobacco. “You've got to hold it in your lungs longer, George.” 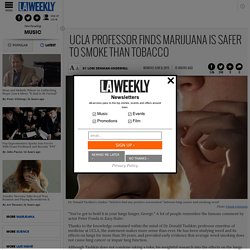 A lot of people remember the famous comment by actor Peter Fonda in Easy Rider. Thanks to the knowledge contained within the mind of Dr. Donald Tashkin, professor emeritus of medicine at UCLA, the statement makes more sense than ever. He has been studying weed and its effects on lungs for more than 30 years, and provided early evidence that average weed smoking does not cause lung cancer or impair lung function.

Why Americans Support or Oppose Legalizing Marijuana. In Their Own Words: Supporters and Opponents of Legalization Public opinion about legalizing marijuana, while little changed in the past few years, has undergone a dramatic long-term shift. 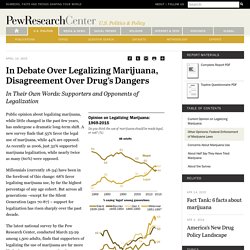 Feds admit medical pot works on brain tumors — but they’re going after users anyway. 'Medical Marijuana Pouring Out Of A Prescription Bottle' [Shutterstock] In a report issued by a U.S. government-funded research group tasked with studying drug abuse and addiction, researchers are admitting that marijuana is useful in killing off specific types of brain tumors. 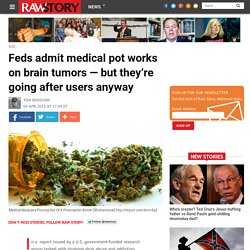 The report — coming from a government-backed group with annual budget of over $1 billion — arrives at an awkward time for the administration following an announcement by the Department of Justice this week that it will continue to prosecute medical marijuana cases against individuals in defiance of Congress. According to the Daily Caller, the National Institute on Drug Abuse (NIDA) issued a revised report for the month of April, stating, “recent animal studies have shown that marijuana can kill certain cancer cells and reduce the size of others. Evidence from one animal study suggests that extracts from whole-plant marijuana can shrink one of the most serious types of brain tumors. Ganja-yoga-adds-an-extra-kick-of-relaxation. The dimly lit room fills with the heady scent of incense as Lu Pancini, the teacher of this unique yoga class, greets her students with hugs and kisses. 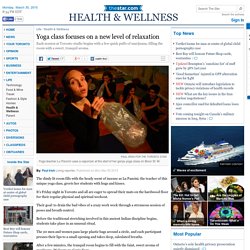 It’s Friday night in Toronto and all are eager to spread their mats on the hardwood floor for their regular physical and spiritual workout. Their goal: to drain the bad vibes of a crazy work week through a strenuous session of poses and breath control. Before the traditional stretching involved in this ancient Indian discipline begins, students take place in an unusual ritual. The 20 men and women pass large plastic bags around a circle, and each participant presses their lips to a small opening and takes deep, calculated breaths.

Cannabidiol, a Major Non-Psychotrophic Cannabis Constituent Enhances Fracture Healing and Stimulates Lysyl Hydroxylase Activity in Osteoblasts. More Proof That Synthetic Medical Marijuana Pales in Comparison to the Real Thing. Simpson. CU researchers find no correlation between cannabis and brain changes. One of the main cannabis prohibition memes these days is based around some recent studies that suggest that cannabis use produces physical changes in the brain. This one really caught fire after The Journal of Neuroscience published research last spring from a Harvard/Northwestern report that scanned the brains of 40 students, half who used cannabis and half who didn’t, and found volume, shape and density changes in two brain areas involved with emotion and motivation. How legal weed could change the future of sex.

Weed’s got a dirty little secret: It holds the power to transform our sex lives. Our ancient ancestors believed it (hello, tantric sex rituals), researchers in the 70s and 80s tried to prove it, and today, savvy “potrepreneurs” are attempting to capitalize on it. Cannabis-laced lube is only the beginning. What can pot do in bed? With the right strain and dosage, it can slooow down time, making every touch feel more intense, every kiss more passionate.

For some people with sexual dysfunctions, it can make the unreachable reachable. As states move to legalize marijuana, the drug is poised to enter the bedroom in weird and wonderful ways—potentially changing the way we mate forever. U.S.: No evidence marijuana leads to higher crash risk. Washington — A government study released late Friday found no evidence that marijuana use leads to a higher risk of getting into a traffic crash. But safety advocates believe it is still dangerous to drive after smoking significant amounts of marijuana, and the government plans more testing. The National Highway Traffic Safety Administration said a 20-month survey of drivers in 2013 and 2014 found that while drinking dramatically raises the chance of a crash, there was no evidence that marijuana use is statistically significant in boosting wreck rates.

The agency said the issue is of growing importance in the wake of marijuana being legalized in Colorado, Oregon, Alaska and Washington state for recreational use. In Michigan, eight cities approved decriminalization measures last year for marijuana: Berkley, Huntington Woods, Mount Pleasant, Pleasant Ridge, Port Huron, Saginaw, Oak Park and Hazel Park. The report's findings were based on two surveys. Why smoking pot feels so good: New neuroscience explains marijuana and the brain.

What drug is enjoyable and, under some circumstances, might actually be good for your brain? Can smoking this substance prevent age-related memory loss, for example? To answer these and similar questions, I turn now to a neurotransmit­ter system in the brain that was discovered through the use of one of the most common drugs in our history. Doctor’s Orders: Legalize Weed. PM Modi’s crucial development agenda is being disrupted by his own Hindu nationalist backers campaigning to “re-convert” Christians and Muslims to the ancient faith.

The Social Nexus of Ganja in Jamaica. What’s in the stems? Marijuana breathalyzer in the works to zap mystery out of who's high. Cannabis extracts can 'dramatically slow' growth of brain cancer tumours - Science - News. Theconversation. Ethan Nadelmann's Fiery TED Talk: What has the war on drugs done to the world? Seattle University Student Suspended for Distributing Medical Marijuana Brownies. If There Were Ever A Pro-Marijuana Video To Go Viral, This Is It.