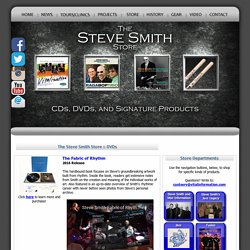 Critical Acclaim for Drum Legacy Hi Steve, I wanted to write and tell you that I watched "Standing On the Shoulders of Giants" last week, and was just blown away. No exaggeration -- the playing, and the musicality of your approach, both humbled and inspired me. The entire production is surely one of the very best drumming videos ever made, and I especially loved the group pieces -- which isn't always the case. I was also utterly flabbergasted by the figures you played with alternating hand and foot "stickings" -- so impressive, and so musical. 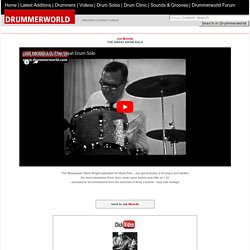 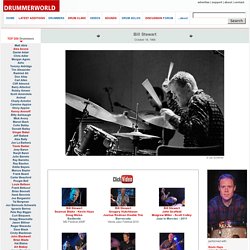 Percussionist Bill Stewart made his name as the rhythmic force behind guitarist John Scofield 's band, working with him for five years between 1990 and 1995. Billy Cobham. Kenny Clarke. Kenny Clarke was a highly influential if subtle drummer who helped to define bebop drumming. 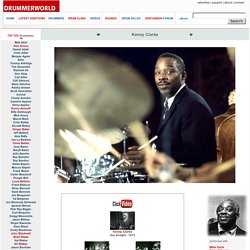 He was the first to shift the time-keeping rhythm from the bass drum to the ride cymbal, an innovation that has been copied and utilized by a countless number of drummers since the early '40s. Clarke played vibes, piano and trombone in addition to drums while in school. Philly Joe Jones. Philly Joe Jones was born with the name Joseph Rudolph Jones in the city of Philadelphia on July 15, 1923. 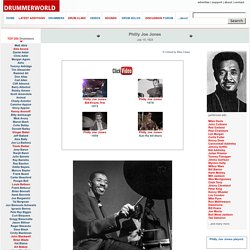 His mother, a piano teacher taught him the basics in music. In his formative years he also studied the drums with drummers the likes of Cozy Cole and Charles Wilcoxon, receiving valuable advise from Art Blakey and a then younger Max Roach. Omar Hakim. Widely acclaimed for his versatility, technological prowess and groove, Omar Hakim is one of the most successful drummers and session men of the past thirty-five years. 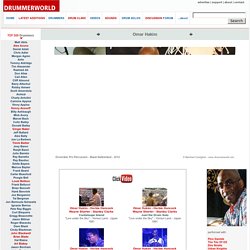 He has collaborated with artists ranging from Miles Davis to Madonna, and has left his imprint on hundreds recordings including several under his own name. Born in New York City to a musical family, Omar began playing the drums at age 5. At the age of ten, he was performing publicly with his father Hasan Hakim, a trombone veteran of the Duke Ellington and Count Basie bands. This period formulated Omar’s traditional and improvisational jazz drumming techniques, and built a strong foundation for his unique drumming style. Adam Nussbaum. Al Foster. "...for what I wanted in a drummer, Al Foster had all of it. 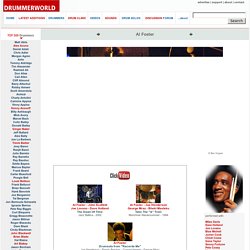 " - Miles Davis Al Foster, master drummer, has been a major innovator in the world of jazz for several decades. As a member of the Miles Davis band for thirteen years, Foster's contribution to Davis' music is articulated by Davis himself in his 1989 autobiography, Miles: The Autobiography, where Davis describes the first time he heard Foster play live in 1972 at the Cellar Club on 95th Street in Manhattan: 'He [Foster] knocked me out because he had such a groove and he would just lay it right in there. That was the kind of thing I was looking for. AI could set it up for everybody else to play off and just keep the groove going forever. " Neil Peart. Neil Peart is the most popular drummer today. 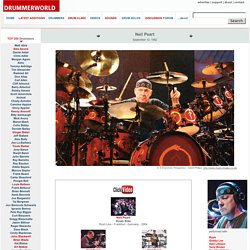 When it comes to voting in Modern Drummer or Drummerworld - Neil Peart is always the No. 1. Neil Peart (pronounced "Peert" not "Pert"), born September 12, 1952, near Hagersville, Ontario, is the drummer and lyricist for the Canadian rock band Rush. Rush is the most successful band from Canada, having played together for over 30 years, and selling over 24.5 million records (U.S.). Clyde Stubblefield. With Jabo Starks, drummer Stubblefield laid down the beat for James Brown's biggest '60s hits. 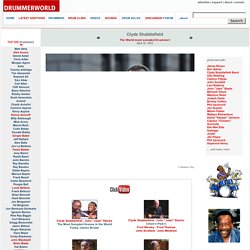 Stubblefield helped drive such seminal Brown funk-fests as "Mother Popcorn," "Cold Sweat," "Say It Loud (I'm Black and I'm Proud)," "I Got The Feelin'," and "Funky Drummer. " Stubblefield's famous break on the latter has been reappropriated so many times that it's earned him the unofficial title as "the World's Most Sampled Drummer. " David Garibaldi. David Garibaldi The Code Of Funk - 80 PAGE BOOK - CD with all eight tracks minus David's drums - 2 Bonus DVD-ROM'S The Code of Funk brings the drumming of David Garibaldi, and the music of Tower of Power to your practice room in a technologically advanced, cutting-edge musical and educational package. 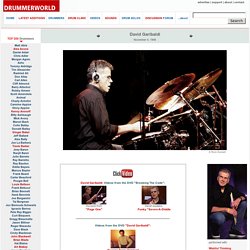 The Code provides an in-depth look at the concepts David uses to create his futuristic, yet, old-school grooves. Included are: 80-PAGE BOOK with detailed transcriptions, by David, of his drum performance in each of eight tunes from T.O.P.'s most recent album, Oakland Zone (Or Music), incisive commentary, photos, a biography, a suggested listening list, and more. Ginger Baker. Ginger Baker was born Peter Edward Baker in Lewisham, South London on 19 August 1939. As a teen, he trained and competed as a racing cyclist, developing strong leg muscles which later contributed to his skill on the double bass drums. Ginger had always planned on becoming a professional cyclist, until he bought his first drum kit at the age of 15. Baker was keenly interested in modern art and jazz, a rebellious beatnik with an eccentric appearance and artistic flair. Phil Collins. Phil Collins' ascent to the status of one of the most successful pop and adult contemporary singers of the '80s and beyond was probably as much of a surprise to him as it was to many others.

Balding and diminutive, Collins was almost 30 years old when his first solo single, "In the Air Tonight," became a number two hit in his native U.K. (the song was a Top 20 hit in the U.S.). Between 1984 and 1990, Collins had a string of 13 straight U.S. Top Ten hits. Long before any of that happened, however, Collins was a child actor/singer who appeared as the Artful Dodger in the London production of Oliver! Collins's first record deal came as drummer for Flaming Youth who released a single album 1969. Joseph "Zigaboo" Modeliste. Joseph Modeliste, also known as Ziggy or Zigaboo, is an American drummer best known as a founding member of the funk group The Meters. Considered to be one of the most innovative, and highly acclaimed drummers ever, Modeliste is a pioneer of second-line funk.