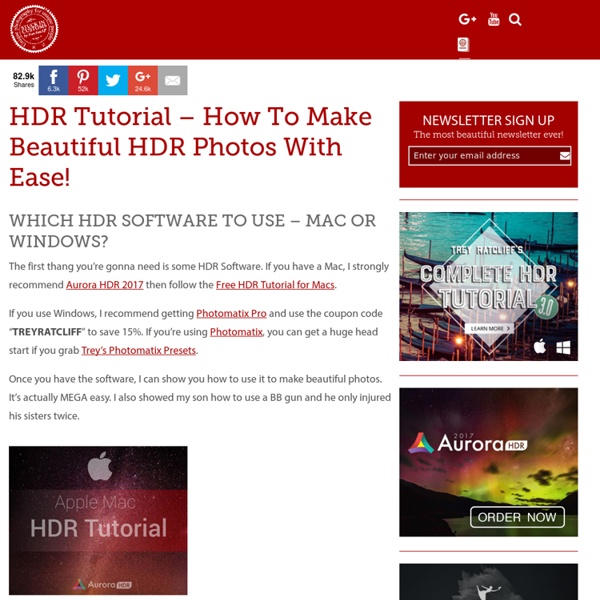 HDR Tutorial – How to Make Beautiful HDR Photos with Ease! Which HDR Software to use – Mac or Windows? The first thang you’re gonna need is some HDR Software. If you have a Mac, I strongly recommend Aurora HDR 2017 then follow the Free HDR Tutorial for Macs. If you use Windows, I recommend getting Photomatix Pro and use the coupon code “TREYRATCLIFF” to save 15%. If you’re using Photomatix, you can get a huge head start if you grab Trey’s Photomatix Presets. Once you have the software, I can show you how to use it to make beautiful photos. The Free HDR Tutorial for Windows I wrote this HDR photography tutorial over six years ago and I update it about every three months. Hundreds of thousands of people have used this tutorial to learn how to make beautiful HDR photos — I am sure it can teach you too! Who is the best audience for this HDR Photography tutorial? This tutorial is great for new photographers as well as intermediate to beyond. Interested in a Complete HDR Video Tutorial?

Pigeon Point Lighthouse - Tyler Westcott Photography Licensing for this image is managed exclusively through Getty Images, via this link. This photograph pre-dates the time I started this site, but since it tends to be my most popular image I am bringing it to this site. Once per year, on the anniversary of the Pigeon Point Lighthouse, the original fresnel lens (which has since been replaced with an unimpressive aerobeacon) is illuminated with a 1 kilowatt light and its impressive original appearance is restored. This was taken in 2007, on the 135th anniversary of the lighthouse, which was such an overwhelmingly foggy evening I nearly turned back to return home to San Francisco, as even the drive there felt unsafe. But once I settled into a place to capture the lighting, found the heavy fog only helped to emphasize the character of the original fresnel lens.

88 Links That Are Like Crack for Photographers Back from a brief hiatus, the Toad has been busy hopping around the internet looking for the best tutorials, great photography and interesting blogs to share with everyone. This weeks list contains some of the very best images, tips and tricks from some of the most talented artists. We really hope you enjoy following the links here as much as the Toad did in bringing them to you. Check out the Toad’s photoblog featuring Canadian landscapes and historical artifacts, and his Canadian Photography website. HDR Tutorial: Dual Processing HDR Images – this is a great HDR tutorial that shows how to use a different process to go about creating HDR imagery.

The EDU Photography Content Collection Video: Exposure and MeteringTools & Techniques for Photographing the Passage of Time Photography is magical. You can use your camera to capture a fleeting moment and the passage of time in a single photograph. Video: Business PracticesStrictly Business 3: Reality: The New Negotiation Is Sales Blake Discher offers guidance on how not to waste time on folks who base decisions on price. Overused Photography Tricks Photography has potential to be both the most equalizing and polarizing art form imaginable. All you really need to get started is a camera — any will do — and an ability to understand what looks good. On the other hand, there are people who swear that you need 50 lenses, a full flash setup and at least a half-dozen SLR bodies before you could even begin to take it seriously as a hobby.

30 Remarkable Photography Tutorials Photography as an occupation and a passion is really an extremely intensive matter which deals with a tremendously huge selection of subjects ranging from art and science. It doesn’t matter in which spot you are located on the professional spectrum, there are certainly more simple ways to learn. Most are low in quantities but if you researched them in details, you will find out a great deal of latest tips and hints in relation to taking photographs. Dedicated Nature Photographer. I started to do photography in January 2000 as a new year resolution, because I needed an interest for my spare time other than lying on tropical beaches drinking beer which is what scuba diving instructors do. And I fell in love with my camera. I am now retired and I am able to do photography full time.

99 Excellent Examples of Forced Perspective Photography Forced perspective is a technique that employs optical illusion to make an object appear farther away, closer, larger or smaller than it actually is. It is used primarily in photography, filmmaking and architecture. It manipulates human visual perception through the use of scaled objects and the correlation between them and the vantage point of the spectator or camera. There are many ways to attack photography and some are much more expensive than others. Here in this showcase, we presenting a Stunning collection of Forced Perspective Photography and Pictures taken by various artists in which all pictures are linked to the author’s pages.

100 Helpful Photography Tutorials for Beginners and Professionals Photography as both a profession and a hobby is an incredibly expansive topic that covers a remarkably vast range of subjects from science and art. No matter where you lie on the professional spectrum, there is simply always more to learn. We spent countless hours scouring the web for the best content we could find and share with you, and today we'll help you expand your knowledge with 100 photography related tutorials! "There are many composition guidelines which can be applied in almost any situation, to enhance the impact of a scene. Below are ten of the most popular and most widely respected composition rules."

Wow! History's most iconic photos in colour VJ Day in Times Square Abraham Lincoln Anne Frank Bikini Atoll Echoes of War Sergei Larenkov His photographs of the siege of Leningrad and St. Petersburg really got lots of name on internet and are famous too. so we present some really nice photographs by sergei, where past and present meet in Moscow, Berlin, Vienna, Prague.. 1. Vienna. 1945/2010. Soviet soldiers in the Imperial Palace Hoffburg. Master Class: How to Create an Unforgettable Portrait London-based photographer Nadav Kander has won awards and international acclaim for his genre-spanning editorial, art and advertising work. Known especially for portraits and landscapes, Kander has conjured compelling stories from photographic subjects ranging from hotel rooms to China’s boundless Yangtze River (his series, Yangtze--The Long River was made into a book and earned the photographer the Prix Pictet in 2009). He has taken unforgettable photos of artists, celebrities, and politicians (including an acclaimed 52-portrait series Obama’s People) for newspapers and magazines, and his work has also been featured in art galleries, including the public collection at the National Portrait Gallery in London. In the last few years, Kander expanded his range further, moving into directing through production company Chelsea Pictures. Recently, GQ commissioned Kander to create a series of portraits to accompany interviews with actors known for playing villains.

28 of history's most fascinating photos The Statue of Liberty surrounded by scaffolding as workers complete the final stages in Paris. Circa 1885. An Royal Air Force pilot getting a haircut during a break between missions, Britain, 1942 Bob Marley on the beach with Miss World 1976 Cindy Breakspeare, mother of Damien Marley. Ethnomusicologist Frances Densmore recording the music of a Blackfoot chief onto a phonograph, 1916. A napalm attack near U.S. troops on patrol in South Vietnam, circa 1966.