My Favorite Tiny (Trailer Base) Homes

Get charmed by this woman's self-built 150 sq. ft. home (Video) A home is not just a building, it's also a state of mind. 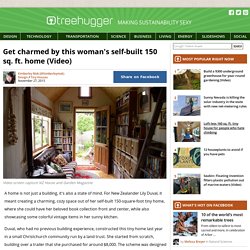 For New Zealander Lily Duval, it meant creating a charming, cozy space out of her self-built 150-square-foot tiny home, where she could have her beloved book collection front and center, while also showcasing some colorful vintage items in her sunny kitchen. Duval, who had no previous building experience, constructed this tiny home last year in a small Christchurch community run by a land trust. She started from scratch, building over a trailer that she purchased for around $8,000. The scheme was designed around a custom-made bookshelf with cupboards that Duval made herself, and which she modified to fit into the new home. NZ House and Garden Magazine/Video screen capture NZ House and Garden Magazine/Video screen capture Like many other tiny housers around the world, one of the main reasons why Duval chose to live smaller was for financial security. It is a warm, welcoming space that exudes comfort and character. Stuff.co.nz/via. 18 year old builds debt-free tiny house as school project (Video)

Loft-less 160 sq. ft. tiny house for people who hate climbing. The idea of downsizing for financial and emotional freedom appeals to many, but some may find some tiny house designs a bit too sappy, or the stuffy, low-clearance reality of a sleeping loft a bit too uncomfortable or even unsafe. 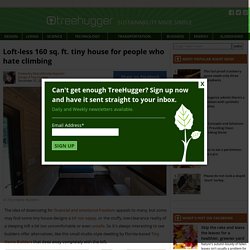 So it's always interesting to see builders offer alternatives, like this small studio-style dwelling by Florida-based Tiny Home Builders that does away completely with the loft. © Tiny Home Builders The bed is tucked away under a raised platform instead. When not in use, it acts as a rather comfy-looking living room sofa. And when pulled out, it's generously sized, and plenty of head room. Looking to the side, we discover that the stairs follows the same pull-out principle, hiding storage space -- a lot of it. Leaf 3 is a tiny house designed for seriously cold climates. It's probably a real test of character, living in 97 square feet through the long, dark Yukon winter in Pelly Crossing, three hours north of Whitehorse. 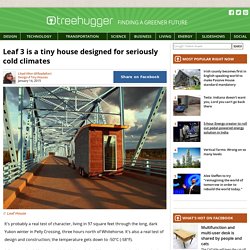 It's also a real test of design and construction; the temperature gets down to -50°C (-58°F). A few years back Kim showed Laird Herbert's Leaf House and I admired its aesthetics and roofline; Now, with Leaf version 3 he has taken the concept to a whole new level of technical sophistication. © Leaf House It's a simple interior, with a Murphy bed instead of what has almost become a standard, the loft bed. This allows for a smaller volume and lower ceiling, and helps reduce the weight. So to keep the weight down, the cladding is simply galvanized mesh normally used to reinforce concrete; it acts as a rain screen and is a lot lighter than conventional siding, although to me it doesn't look like it is going to a whole lot of rain screening. . © Panasonic. 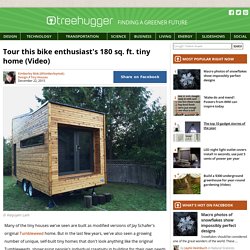 But in the last few years, we've also seen a growing number of unique, self-built tiny homes that don't look anything like the original Tumbleweeds, showcasing people's individual creativity in building for their own needs and their particular climate, whether they are modern, eclectic or just plain out of this world. Seen over at Tiny House Swoon, this 180-square-foot tiny dwelling is built on a 18-foot trailer by Squamish, British Columbia resident Kequyen Lam. There's a few unique characteristics to this home -- most notably, there's lots of storage for bikes, as Squamish is well-known as an outdoor enthusiasts' getaway. We get a quick video tour from Lam himself here: The first thing we see is that the home features double patio doors to let in light and to completely open one side of the home to the outdoors. © Kequyen Lam © Kequyen Lam Kequyen Lam/Video screen capture.

Texas couple builds 100 sq. ft. tiny home for $7,000. One of the big misconceptions about tiny homes is that they are expensive -- though the cheap tiny house can also be a fallacy. 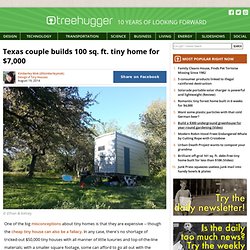 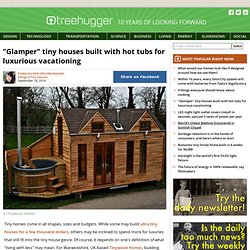 While some may build ultra-tiny houses for a few thousand dollars, others may be inclined to spend more for luxuries that still fit into the tiny house genre. Of course, it depends on one's definition of what "living with less" may mean. Tinywood Homes.