How to make money online 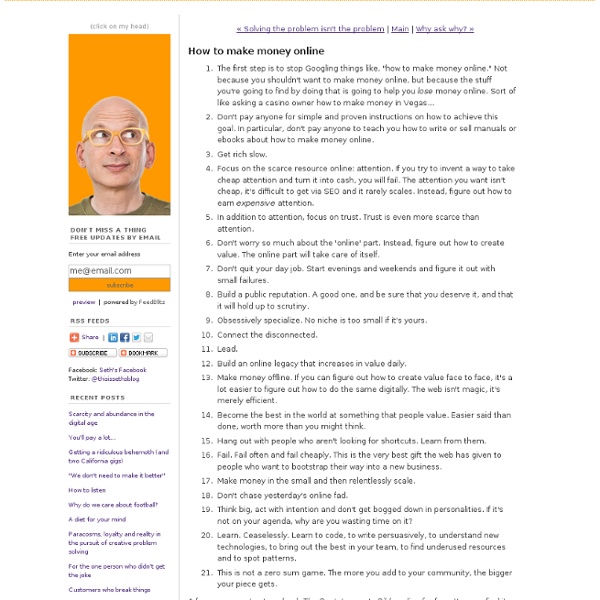 The next free ebook (Squidoo!) Everyone's an Expert (about something). How do you get more people to visit your site?or buy your product? How do you get your ideas to spread? If you work on the web, this is one of the biggest questions you wrestle with. This is an ebook about getting more by presenting less. Here’s my short take on what you’ll find in the ebook: “For a long time, the web has been about more. The ebook outlines a technique that will increase PageRank, user satisfaction, clickthrough and the spread of your ideas, whatever those ideas are. I'm excited enough about this idea that I've spent the last 5 months assembling a team that is building a platform called Squidoo. It doesn’t matter if you use Squidoo or not… the idea of a lens makes sense whether you post it yourself or let us host it for you. Squidoo isn't ready yet. Download Everyone is an expert2.pdf

The Challenges of Launching an Encore Career - Planning to Retire Many people dream about launching a second career in a field they have always wanted to try. But the transition into an encore career can be a long and costly process. Most people earn a significantly lower amount of money (43 percent) or no money at all (24 percent) during the transition from one job to the next, according to a recent MetLife Foundation and Civic Ventures survey conducted by Penn Schoen Berland. The online survey of 253 adults between ages 44 and 70 who are currently in encore careers found that over half (57 percent) of these older workers had to tap their personal savings to make ends meet during the transition. “That transition is not necessarily a very easy or a sure thing,” says Jim Emerman, executive vice president of Civic Ventures. “The financial hardship of the transition, while not really surprising, really jumped out at us as one of the big challenges.” It often takes a significant amount of time for older workers to launch second careers.

Reinvent Your Career by Writing Your Own Narrative - Christopher Bowe by Christopher Bowe | 1:45 PM May 4, 2012 A topsy-turvy world like the one in which we live offers us tremendous opportunities. But to tap them, we must remove the barriers within ourselves. The crucial barriers are the ways we compartmentalize our experiences — keeping them uniquely bound to one kind of job or career. Avoid such compartmentalization. Break open those compartments and mix all of your experiences, knowledge, and skills into the precise blend that makes a new you. Not long ago, I had a respected executive recruiter tell me I needed to “climb in a box” — drastically narrow what kind of work I was seeking to do in a new career move in order to get potential employers to fit me into one of the boxes they needed to fill. I’ve made two major career moves in the span of four years. A mixing board is a large, imposing console with hundreds of dials and sliding faders to control volume. Here are two simple examples of past experiences I’ve “mixed” higher to innovate me.

Inside Small Biz Guru Michael Gerber's Dreaming Room This is live from best-selling E-Myth author Michael Gerber's Dreaming Room workshop at the Inc. 5000 conference. It's 2:10 PM and he's talking louder and louder. The room is packed... looks like over 100 entrepreneur-attendees. He speaks extemporaneously. Pauses a lot. References Ray Kroc and McDonald's repeatedly. Kroc created a system that's replicable, that is simple, that can be taught in every detail, that delivers predictable value to every customer. Dressed in a dark suit and red tie (not his trademark white suit and pink tie), the 72-year-old Gerber sits on a barstool at the front of the room. One of his central points is that most entrepreneurs are working in their businesses, but not on them. "Successful entrepreneurs possess four characteristics: Dreamer, Thinker, Storyteller, Leader." Here's what's stupid, he says. Write this down, he says: "I have a dream, I have a vision, I have a purpose, I have a mission." Some great nuggets so far: More TK.

So You Want to Run a Lean, Mean Startup Machine? Here's How. You don’t have to run your business on a shoestring budget or out of your parents’ garage to have a lean startup, says entrepreneur Eric Ries. Lean startups are more about your point of view, process and product than about the size of the pot you’re drawing from. And running one calls for a new breed of entrepreneurial manager. This need for a sea change in management may well mark the dawn of Management 2.0, Ries told BusinessNewsDaily. Ries hopes his new book, "The Lean Startup," (Crown Business, 2011), will shake up the practice of management today as much as Taylor's monograph defined the received wisdom of management thinking a century ago. The future of management "I really figure we're entering management's second century," Ries said. "It's neither better nor worse," he said. Uncertainty and the lean startup is a match made in heaven, Ries said. The lean startup Point of view and process create the launch pad for a lean startup, Ries said. Humility is the antidote Build-measure-learn

How You Can Climb Global Growth Curve Startups can improve their odds for success when expanding into international markets, new research suggests. The answer lies is how the company's management team learns about their new foreign territory. A mixture of learning approaches work best, the research showed. "Going global isn’t easy, and it’s especially hard for startups because they tend to have very small teams and not a lot of resources," said Jason Davis, a professor in the Technological Innovation, Entrepreneurship and Strategic Management (TIES) group at MIT's Sloan School. "Few, if any, employees have deep knowledge of markets other than the one where they live." Faced with the need to learn quickly about an international market, businesses use a range of learning approaches in a variety of sequences, Davis said. [Small Business Startups Create the Most New Jobs] Companies that learned by soloing performed better in the short term, the research showed. "Internationalization is fraught with risk,” he said.

Peter Pronovost’s checklists better intensive care The damage that the human body can survive these days is as awesome as it is horrible: crushing, burning, bombing, a burst blood vessel in the brain, a ruptured colon, a massive heart attack, rampaging infection. These conditions had once been uniformly fatal. Now survival is commonplace, and a large part of the credit goes to the irreplaceable component of medicine known as intensive care. It’s an opaque term. Specialists in the field prefer to call what they do “critical care,” but that doesn’t exactly clarify matters. The difficulties of life support are considerable. But the emergency technicians continued CPR anyway. After six hours, her core temperature reached 98.6 degrees. First, her pupils started to react to light. What makes her recovery astounding isn’t just the idea that someone could come back from two hours in a state that would once have been considered death. On any given day in the United States, some ninety thousand people are in intensive care. “I need to get out!”

The flipping point When people say, "The tipping point," they often misunderstand the concept in Malcolm's book. They're actually talking about the flipping point. The tipping point is the sum total of many individuals buzzing about something. But for an individual to start buzzing, something has to change in that person's mind. It starts when the story of a brand or a person or a store or an experience flips in your head and it goes from good to bad, or from ignored to beloved. It's easy to wish and hope for your project to tip, for it to magically become the hot thing. Before the tipping point, someone has to flip. We resist incremental improvement in our offerings and our stories because it just doesn't seem likely that one good interaction or one tiny alteration can possibly lead to a significant amount of flipping. And the reason it's so difficult?

Multimillionaire Entrepreneur Jane Wurwand on Self-Reliance | Video Editor's Note: 'Trep Talk takes you inside the millionaire minds of the most intriguing entrepreneurs behind the big ideas. Join Entrepreneur for a more personal look at the creators of some the most successful companies today. Behind the smiling eyes of Jane Wurwand is a work ethic that operates in overdrive, especially when it comes to helping women entrepreneurs stand on their own two feet. The U.K. Today, their products are sold in more than 28,000 salons and spas in 86 countries. Related Video: Dermalogica's Jane Wurwand on the Creative Process In this interview for 'Trep Talk, I sat down with Wurwand in her creative sanctuary in Santa Monica, Calif., an apartment above the flagship Dermalogica store. "There's a special place in hell reserved for women who don't help other women," says Wurwand, sharing her favorite quote from former U.S. Related Video: Dermalogica's Founder on Overcoming Challenges in Business Teri Evans is deputy editor of Entrepreneur.com.