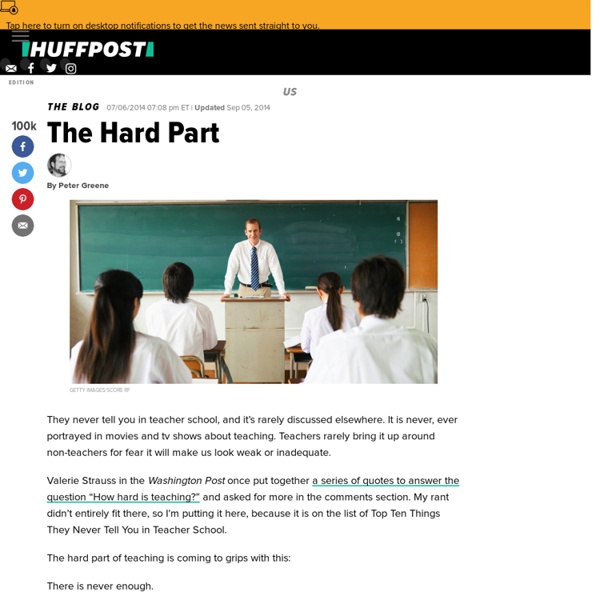 They never tell you in teacher school, and it’s rarely discussed elsewhere. It is never, ever portrayed in movies and tv shows about teaching. Teachers rarely bring it up around non-teachers for fear it will make us look weak or inadequate. Valerie Strauss in the Washington Post once put together a series of quotes to answer the question “How hard is teaching?” and asked for more in the comments section. My rant didn’t entirely fit there, so I’m putting it here, because it is on the list of Top Ten Things They Never Tell You in Teacher School. The hard part of teaching is coming to grips with this: There is never enough. There is never enough time. As a teacher, you can see what a perfect job in your classroom would look like. You know all this, but you can also do the math. 110 papers about the view of death in American Romantic writing times 15 minutes to respond with thoughtful written comments equals — wait! Every year you get better. But every day is still educational triage. Related:  KEEPERS

The Hard Part They never tell you in teacher school, and it's rarely discussed elsewhere. It is never, ever portrayed in movies and tv shows about teaching. Teachers rarely bring it up around non-teachers for fear it will make us look weak or inadequate. Valerie Strauss in the Washington Post once put together a series of quotes to answer the question "How hard is teaching?" The hard part of teaching is coming to grips with this: There is never enough. There is never enough time. As a teacher, you can see what a perfect job in your classroom would look like. You know all this, but you can also do the math. 110 papers about the view of death in American Romantic writing times 15 minutes to respond with thoughtful written comments equals -- wait! If you are going to take any control of your professional life, you have to make some hard, conscious decisions. Every year you get better. But every day is still educational triage. Not everybody can deal with this. Here's your metaphor for the day. Trust us.

Church Members Mistreat Homeless Man in Church Unaware It Is Their Pastor in Disguise Pastor Jeremiah Steepek transformed himself into a homeless person and went to the 10,000 member church that he was to be introduced as the head pastor at that morning. He walked around his soon to be church for 30 minutes while it was filling with people for service, only 3 people out of the 7-10,000 people said hello to him. He asked people for change to buy food – no one in the church gave him change. He went into the sanctuary to sit down in the front of the church and was asked by the ushers if he would please sit in the back. He greeted people to be greeted back with stares and dirty looks, with people looking down on him and judging him. As he sat in the back of the church, he listened to the church announcements and such. When all that was done, the elders went up and were excited to introduce the new pastor of the church to the congregation. “We would like to introduce to you Pastor Jeremiah Steepek.” The homeless man sitting in the back stood up and started walking down the aisle.

Gregory Project concept envisions billboards to house the homeless The Gregory Project, by DesignDevelop (Image: DesignDevelop) Image Gallery (16 images) Gizmag is no stranger to projects which aim to turn the ubiquitous billboard into something more interesting, including an air-purifying billboard, and an artist's retreat. View all From the renders provided, the interior of the billboard looks small but relatively luxurious, and is split into two rooms. DesignDevelop told Gizmag that, since the billboard homes would be placed close to accommodated areas, there would be the possibility to connect them to local electricity, plumbing and water facilities. The project remains a concept at present, but DesignDevelop envisions that the Slovakian city of Banska Bystrica could see the first rollout of the Gregory Project, and it is hoped that the design could eventually spread worldwide. Sources: Gregory Project, DesignDevelop About the Author Adam is a tech and music writer based in North Wales. Post a CommentRelated Articles

The Inside Of This Billboard Will Astonish You Now here's a good sign. Project Gregory in Slovakia has designed a roadside billboard that doubles as a house for the homeless. According to the project's website, the space is triangular in shape to allow for signage that faces drivers in both directions. There's room enough for a living area with kitchen, desk and bed, plus a bathroom. (Story continues below.) The structure would require "minimal maintenance cost" that could be partially paid through the rental of the advertising platform, the Project Gregory website notes. The concept, also called the Gregory Project by some outlets, was proposed by a man named Gregory who wishes to remain anonymous, Matej Nedorolík of DesignDevelop -- the firm behind the initiative -- said in an email to The Huffington Post. "We would try our best to make it a reality," Nedorolík said on behalf of Gregory. Tell us what you think of the idea in the comments, or tweet us @HuffPostImpact. (Hat tip, AdWeek)

How not to say the wrong thing (Illustration by Wes Bausmith…) When Susan had breast cancer, we heard a lot of lame remarks, but our favorite came from one of Susan's colleagues. She wanted, she needed, to visit Susan after the surgery, but Susan didn't feel like having visitors, and she said so. Her colleague's response? "It's not?" The same theme came up again when our friend Katie had a brain aneurysm. YEAR IN REVIEW: 10 tips for a better life from The Times' Op-Ed pages in 2013 This woman loves Katie, and she said what she did because the sight of Katie in this condition moved her so deeply. Susan has since developed a simple technique to help people avoid this mistake. Draw a circle. Here are the rules. Everyone else can say those things too, but only to people in larger rings. When you are talking to a person in a ring smaller than yours, someone closer to the center of the crisis, the goal is to help. Comfort IN, dump OUT. Complaining to someone in a smaller ring than yours doesn't do either of you any good.

Gate A-4 – Live & Learn Gate A-4 By Naomi Shihab Nye: Wandering around the Albuquerque Airport Terminal, after learning my flight had been delayed four hours, I heard an announcement: “If anyone in the vicinity of Gate A-4 understands any Arabic, please come to the gate immediately.” Well— one pauses these days. Gate A-4 was my own gate. I went there. An older woman in full traditional Palestinian embroidered dress, just like my grandma wore, was crumpled to the floor, wailing. I stooped to put my arm around the woman and spoke haltingly. We called her son, I spoke with him in English. She was laughing a lot by then. Then the airline broke out free apple juice and two little girls from our flight ran around serving it and they were covered with powdered sugar too. And I looked around that gate of late and weary ones and thought, This is the world I want to live in. This can still happen anywhere. Notes: Image Source: imeu.org. Like this: Like Loading...

7 Habits of Chronically Unhappy People I often teach about happiness and what has become exceedingly clear is this: There are seven qualities chronically unhappy people have mastered. According to Psychology Today, University of California researcher Sonja Lyubomirsky states: "40 percent of our capacity for happiness is within our power to change." If this is true and it is, there's hope for us all. There are billions of people on our planet and clearly some are truly happy. The rest of us bounce back and forth between happiness and unhappiness depending on the day. Throughout the years, I've learned there are certain traits and habits chronically unhappy people seem to have mastered. The difference between a happy and unhappy life is how often and how long we stay there.Here are the 7 qualities of chronically unhappy people.1. Perseverance towards problem-solving versus complaining over circumstances is a symptom of a happy person. 2. 3. 4. 5. 6. 7. Happy people live in the now and dream about the future. Close Amazon

I got left at the altar: turning heartbreak into artwork When I met my fiancé in the beginning of 2011 we were both athletes at the same university in Tennessee. We started dating soon after that and hit it off very quickly. Our relationship was put to the test in 2012 when he moved back to his hometown in Florida, and I stayed in Tennessee to finish school. After a year of long distance, he surprised me and decided to move to Memphis, my hometown, to be with me. By December 2013 we moved in together and were doing great. So great, that we got engaged in March and started planning our wedding for November. I poured my heart and soul into the wedding plans to try and make it the best day it could be. Five days before the wedding the unexpected happened. I was in complete shock and had no idea what to think or do. As the day that was supposed to be my wedding day approached, none of us knew what to do, think, or feel. My bridesmaids and parents supported the idea 100% and even joined me in their own dresses and suit.