Document (57) Fracking Is Among the Most Harmful Forms of Energy Production, Study Finds. In Brief A new study by U.K. scientists examining the environmental, economic, and social sustainability of fracking ranks the controversial practice seventh amongst a pool of nine energy sources. 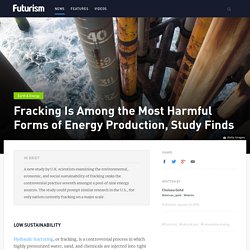 The study could prompt similar research in the U.S., the only nation currently fracking on a major scale. Low Sustainability Hydraulic fracturing, or fracking, is a controversial process in which highly pressurized water, sand, and chemicals are injected into tight rock formations to open up cracks so that oil and/or natural gas can be extracted. To determine the potential impact of fracking in the U.K., a group of Manchester scientists ranked it and other energy sources, such as coal, wind, and solar, after considering environmental, economic, and social sustainability. Their study has been published in the journal Science of the Total Environment.

Fracking in Context Some nations have banned fracking, and currently, the U.S. is the only country using it on a major scale. 2017 Broke Another Heat Record — but There's Hope for Future Years. In Brief 2017 set a new temperature record. 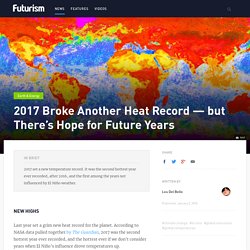 It was the second hottest year ever recorded, after 2016, and the first among the years not influenced by El Niño weather. Our Climate is Changing. It's Time to Talk About Geoengineering. Tinkering With the Climate Planet Earth is humankind’s biggest experiment. 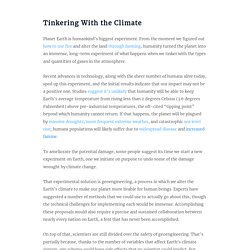 From the moment we figured out how to use fire and alter the land through farming, humanity turned the planet into an immense, long-term experiment of what happens when we tinker with the types and quantities of gases in the atmosphere. Denmark Breaks Own Record for Electricity Generated via Wind Power. In Brief Denmark has once again broken new ground when it comes to wind power. 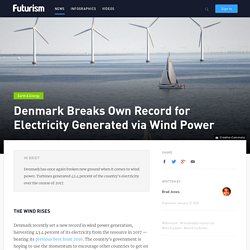 Turbines generated 43.4 percent of the country's electricity over the course of 2017. Denmark recently set a new record in wind power generation, harvesting 43.4 percent of its electricity from the resource in 2017 — beating its previous best from 2016. The country’s government is hoping to use the momentum to encourage other countries to get on board.

“The price of wind energy is moving in one direction only, and that’s a steep downward trajectory,” commented Denmark’s energy minister Lars Chr. Denmark has been leading the push toward wind power for some time. While Denmark’s decision to pursue renewable resources is part of a larger global effort to phase out fossil fuels, the country does have something of a vested interest. Denmark still subsidizes wind power projects, as it has done since the 1970s. China Is the New World Leader in Renewable Energy. In Brief A new report from the IEEFA is positioning China as a world leader in renewable energy investment. 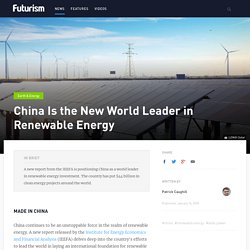 The country has put $44 billion in clean energy projects around the world. Global Temperatures Reached New Highs in 2017. In Brief NASA and the National Oceanic and Atmospheric Administration confirmed that 2017 was the second hottest year on record, and the first if we don't count the transient warming influence of the climate cycle El Niño. 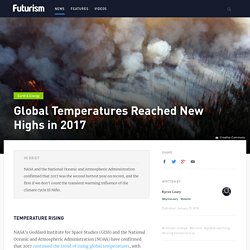 Temperature Rising NASA’s Goddard Institute for Space Studies (GISS) and the National Oceanic and Atmospheric Administration (NOAA) have confirmed that 2017 continued the trend of rising global temperatures, with both organizations ranking last year as the second and third hottest years on record respectively. This difference is due to the different methods each use to analyze global temperatures, but the overall message remains: the warming trend continues. In fact, according to both groups, the five warmest years ever recorded have all taken place since 2010, with 2017 achieving the same high temperatures without the phenomenon known as El Niño.

El Niño was in effect for most of 2015 and parts of 2016, while La Niña occurred in 2017. How Much Warming Can We Really Expect Once We Stabilize Climate Change? In Brief The Intergovernmental Panel on Climate Change projects the likely range of global warming will span from 1.5 to 4.5 degrees Celsius. 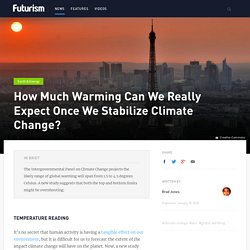 A new study suggests that both the top and bottom limits might be overshooting. Temperature Reading It’s no secret that human activity is having a tangible effect on our environment, but it is difficult for us to forecast the extent of the impact climate change will have on the planet. China Has Built a Huge Floating Solar Farm on Top of a Deserted Coal Mine. In Brief In China, the world's largest floating solar farm is built on a lake that used to be a coal mine. 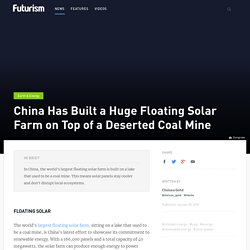 This means solar panels stay cooler and don't disrupt local ecosystems. Floating Solar The world’s largest floating solar farm, sitting on a lake that used to be a coal mine, is China’s latest effort to showcase its commitment to renewable energy. With a 166,000 panels and a total capacity of 40 megawatts, the solar farm can produce enough energy to power 15,000 homes, the South China Morning Post reports. While it still consumes a lot of oil, coal and natural gas, China is experiencing an unprecedented solar boom.

In its yearly overview of the world’s energy markets, the International Energy Agency (IEA) finds that China is entering a new phase of its economic development, moving away from heavy manufacturing and other carbon intensive industries. In Extreme Heat, Trees Stop Sucking Carbon From the Air. Carbon Capture Researchers in Australia have made a strange new observation about how trees respond to extreme temperatures.

After observing trees in the country for a full year, scientists from the University of Western Sydney’s Hawkesbury Institute for the Environment found that, in extreme heat, leaves “sweat” to survive. Until now, it was believed that photosynthesis and transpiration (the process of water release) couldn’t occur without each other. The new study, published in the journal Global Change Biology, showed that during extreme heatwaves trees temporarily stop capturing carbon — even as they continue to release water through their leaves. WEF Future of Electricity 2017.

A Colossal Wind Turbine Just Broke World Energy Records. In Brief An off-shore wind turbine 220 meters tall generated nearly 216,000 kWh of energy over a 24-hour period, breaking the world record for a single turbine in that amount of time.With the cost to set up renewable energy systems dropping, a world powered entirely by clean energy is become ever more achievable.

Off-Shore Monster Wind power has gotten a massive physical upgrade, and even Don Quixote would need to think twice before taking on this windmill from Danish company MHI Vestas Offshore Wind. The Solar Industry Now Employs Twice As Many People As Coal. The Rise of Renewables The US’ renewable energy industry is currently thriving. A survey released by The Solar Foundation shows that the solar industry has nearly tripled employment since they started tracking its growth back in 2010. According to the study, 260,000 people are now employed by the solar industry.

The majority of positions are currently in installation, with workers earning an average of $25.96 per hour. The biggest market so far, is residential, which encompasses 41 percent of available jobs; with the commercial and utility-scale markets trailing behind. "Miniature" Nuclear Power Plants Could Create a New Age in Energy. Power on a New Scale In the case of nuclear power plants, one company thinks bigger isn’t always better.

NuScale Power has just submitted a design for a ‘miniature’ version of traditional plants. Of course, “miniature” in this case is relative to the sprawling complex that is typical of nuclear power plants. But considering NuScale Power is reducing hectares into a structure that can fit on a flat-bed truck (roughly nine-stories tall) the design is a feat unto itself. NuScale Power’s concept is anchored on a modular design that will require assembly at designated facilities before it is delivered to power utilities. United States Could Be Completely Powered by Renewable Energy by 2050: Study. In Brief A new research paper finds that using wind, solar, and other renewable energy sources could power the United States for a lower cost than fossil fuels.

The study wasn’t just looking at electricity — it was looking at all energy consumption, including transportation, heating and cooling, and industry. Some tweaks to industry need to be made — for instance, iron could be produced using electric arc furnaces instead of coal-powered blast furnaces. US Energy Use Per $1 Halved Over Last 35 Years Via Improved Energy Efficiency. July 14th, 2015 by James Ayre Improvements in energy efficiency (amongst other things) have led to energy intensity (the measure of energy use per dollar of GDP) being halved over the last 35 years, according to a recent report from the nonprofit American Council for an Energy-Efficient Economy (ACEEE).

To be more specific, energy intensity has fallen from 12.1 thousand Btus per dollar (back in 1980) to 6.1 thousand Btus per dollar (as of 2014), according to the recent analysis. The Way Humans Get Electricity Is About to Change Forever. The renewable-energy boom is here. Trillions of dollars will be invested over the next 25 years, driving some of the most profound changes yet in how humans get their electricity. That's according to a new forecast by Bloomberg New Energy Finance that plots out global power markets to 2040.

Here are six massive shifts coming soon to power markets near you: 1. Solar Prices Keep Crashing The price of solar power will continue to fall, until it becomes the cheapest form of power in a rapidly expanding number of national markets. Solar power will eventually get so cheap that it will outcompete new fossil-fuel plants and even start to supplant some existing coal and gas plants, potentially stranding billions in fossil-fuel infrastructure. 2. With solar power so cheap, investments will surge. 3. The biggest solar revolution will take place on rooftops. . $2.2 Trillion Goes to Rooftops by 2040 4. Yes, the world is inundated with mobile phones, flat screen TVs, and air conditioners. 5. Move over, shale. The sun is now the fastest-growing source of U.S. electricity.

“The World in 2025″ Predicts Abundant Solar Power and Food, Tailored Drugs, Gene Therapies. A solar future isn't just likely — it's inevitable. I plan to write a great deal about the short-term prospects for clean energy, both economic and political, but I want to begin life here at Vox with an imaginative exercise, a bit of musing about what energy might look like in the future — not 10 or 20 years from now, but 50, 70, even 100 years ahead. Solar power passes 1% global threshold - Futurism. World's Largest Solar Farm Goes Online In California. France decrees new rooftops must be covered in plants or solar panels - Futurism. Synopsis. IBM Solar Collector Magnifies Sun By 2000X and Could Provide Power to the Entire Planet - Futurism.

Synopsis. Google Will Tell You if Your Home is a Good Fit for Solar Power. A fully transparent solar cell that could make every window and screen a power source. In Brief Researchers at Michigan State University have created a fully transparent solar concentrator, which could turn any window or sheet of glass into a photovoltaic solar cell. Scientists Create Transparent Solar Concentrator. Solar Roads Could Power An Entire Country. Scientists Develop Efficient Artificial Leaf That Can Turn Solar Energy into Fuel.

This Ultra-Fast Charging Aluminum Battery is the Future - Futurism. Tesla Is Devising a Way to Let You Power Your Entire Home. The New Tesla Home Battery Powered By Solar Will Make Off Grid Living Mainstream. Hemp nanosheets could be better than graphene for making the ideal supercapacitor. MIT designs small, modular, efficient fusion power plant.