Perspectives Inside and Outside of Japan

1995 sarin victim makes film to confront member of Aum Shinrikyo. A documentary film on “redemption” features an individual whose group had earlier tried to kill the director. 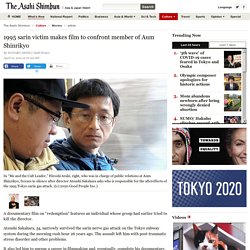 Atsushi Sakahara, 54, narrowly survived the sarin nerve gas attack on the Tokyo subway system during the morning rush hour 26 years ago. The assault left him with post-traumatic stress disorder and other problems. It also led him to pursue a career in filmmaking and, eventually, complete his documentary, “Me and the Cult Leader,” which opened in March. On the morning of March 20, 1995, Sakahara, a company employee at the time, got on the first car of a Tokyo Metro Hibiya Line train at Roppongi Station. He found a male passenger collapsed in a seat near the door. Sakahara could not focus his eyes and had strange feeling, so he moved to the next car. Connecting the Last Mile: the Role of Communications in the Great East Japan Earthquake by Internews Europe. Japan’s 3.11 Earthquake, Tsunami, Atomic Meltdown. Japan’s 3.11 Earthquake, Tsunami, Atomic Meltdown This guide is divided into two parts. 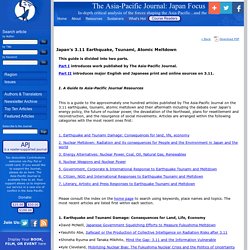 Part I introduces work published by The Asia-Pacific Journal. Part II introduces major English and Japanese print and online sources on 3.11. I. A Guide to Asia-Pacific Journal Resources. PROMETHEUS TRAP/ THE EMPEROR AND 3/11 DISASTER (1): Princesses packed bath towels for evacuees using imperial villa. Editor's note: This marks the start of a new 10-part series under The Prometheus Trap heading. 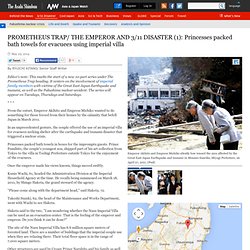 It centers on the involvement of imperial family members with victims of the Great East Japan Earthquake and tsunami, as well as the Fukushima nuclear accident. The series will appear on Tuesdays, Thursdays and Saturdays. From the outset, Emperor Akihito and Empress Michiko wanted to do something for those forced from their homes by the calamity that befell Japan in March 2011. In an unprecedented gesture, the couple offered the use of an imperial villa for evacuees seeking shelter after the earthquake and tsunami disaster that triggered a nuclear crisis. Princesses packed bath towels in boxes for the impromptu guests. Once the emperor made his views known, things moved swiftly.

DIALOGUE/ Takeshi Yoro and Tatsuru Uchida: We must grasp problems posed by the 3/11 quake. The March 11 earthquake and tsunami left immeasurable scars across northeastern Japan on an unprecedented scale. 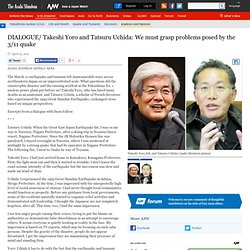 What questions did the catastrophic disaster and the ensuing accident at the Fukushima No. 1 nuclear power plant put before us? Takeshi Yoro, who has faced many deaths as an anatomist, and Tatsuru Uchida, a scholar of French literature who experienced the 1995 Great Hanshin Earthquake, exchanged views based on unique perspectives. Excerpts from a dialogue with them follow: Tatsuru Uchida: When the Great East Japan Earthquake hit, I was on my way to Naoetsu, Niigata Prefecture, after a skiing trip in Nozawa Onsen resort, Nagano Prefecture. Imperial couple mark 20th anniversary of Great Hanshin Earthquake.

KOBE--Emperor Akihito and Empress Michiko joined hundreds of mourners at a moving ceremony here Jan. 17 to remember victims of the Great Hanshin Earthquake that struck 20 years ago. 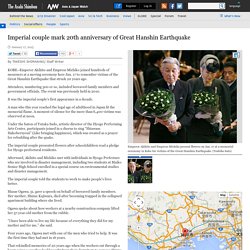 Attendees, numbering 500 or so, included bereaved family members and government officials. The event was previously held in 2010. It was the imperial couple's first appearance in a decade. Survivors of Hanshin quake haunted by memories of lost loved ones 20 years on. More than one-third of family members who lost relatives in the Great Hanshin Earthquake continue to suffer from anxiety 20 years later, according to a recent survey. 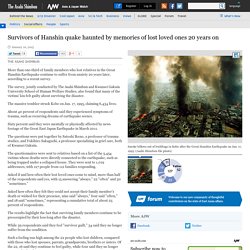 The survey, jointly conducted by The Asahi Shimbun and Kwansei Gakuin University School of Human Welfare Studies, also found that many of the victims' kin felt guilty about surviving the disaster. The massive temblor struck Kobe on Jan. 17, 1995, claiming 6,434 lives. Teenage Wasteland: Portraits of Japanese Youth in Revolt, 1964. See Photos of Love and Courtship in 1950s Japan. Ex-nurse recalls Battle of Okinawa, aims to share misery of war.

MITO, IBARAKI PREF. – Fumiko Nashiro, 87, vividly remembers the leader of the nurse corps she belonged to during the 1945 Battle of Okinawa telling members “not to die but return to your parents and tell the misery of war to future generations.” 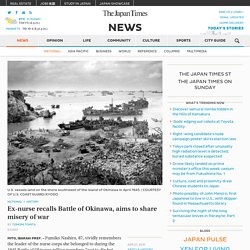 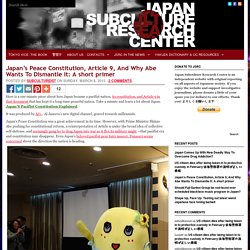 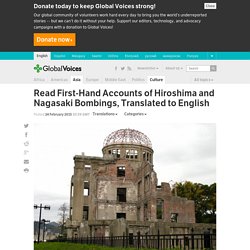 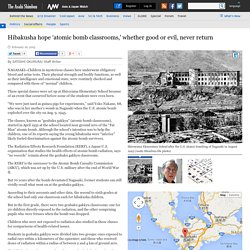 Their physical strength and bodily functions, as well as their intelligence and emotional state, were routinely checked and compared with those of “normal” children. These special classes were set up at Shiroyama Elementary School because of an event that occurred before some of the students were even born. “We were just used as guinea pigs for experiments,” said Yoko Nakano, 68, who was in her mother’s womb in Nagasaki when the U.S. atomic bomb exploded over the city on Aug. 9, 1945. Famed Hiroshima paintings to be displayed in U.S. on 70th anniversary of atomic bombing.

The celebrated Hiroshima Panels will be leaving Japan this summer and be displayed in Washington for the first time upon the 70th anniversary of the 1945 atomic bombing. "I hope the panels will convey the actual devastation of the atomic bomb," said Yoshiko Hayakawa, 68, who is organizing the exhibition. Because many U.S. citizens believe the atomic bombings of Hiroshima and Nagasaki were necessary to end the war, Hayakawa said she hopes the panels will help Americans understand the true horrors of nuclear weapons.

"These are very powerful artworks that can transcend a national border to convey our strong hope for peace," she said. 70 years on, Tokyo events to recall horrors of 1945 air raid. A range of events is planned in the nation's capital to pay tribute to the 100,000 residents who perished in the Great Tokyo Air Raid on March 10, 1945. More than 40 exhibitions, concerts and memorial events are being organized by local governments and citizens to mark the 70th anniversary of the U.S. attack during the closing months of World War II. Sumida Ward's local history museum is now holding a special exhibition titled, "The 70 years since the major Tokyo bombing," through May 17. A-bomb survivor, 90, intent on attending NPT confab.

HANAMAKI, IWATE PREF. – In rooms throughout his home, 90-year-old Masakazu Saito has dozens of old clocks indicating it is 8:15 a.m. — the time an atomic bomb flattened Hiroshima and nearly killed him seven decades ago. “This keeps me remembering the event that should never happen again,” he says. Soviet spy who visited Hiroshima and Nagasaki days after A-bombings dies at 101. MOSCOW--Mikhail Ivanov, a Soviet spy who entered Hiroshima and Nagasaki shortly after the U.S. atomic bombings leveled the cities in August 1945, died recently in Moscow.

He was 101. Ivanov was stationed at the Soviet Embassy in Tokyo in the later years of World War II and was ordered to enter Hiroshima and Nagasaki before the arrival of U.S. teams sent to investigate the destruction. The U.S. military dropped two types of A-bombs, one made of uranium on Hiroshima on Aug. 6 and the other made of plutonium on Nagasaki on Aug. 9. Japan surrendered to the Allied forces on Aug. 15. Japan's wartime brothels were wrong, says 91-year-old veteran. Pressure in Japan to Forget Sins of War - NYTimes.com. Photo SARUFUTSU, Japan — More than a half-century has passed since the postmaster in this seaside hamlet on the frigid, northern tip of Japan pulled aside a young man and shared a secret. Somewhere in the village, the old man confided, was a lost graveyard hiding Korean bones. It took years for Koichi Mizuguchi to grasp the significance of that utterance, and decades more to pry the grim truth from his tight-lipped neighbors: At least 80 Korean laborers died of abuse and malnutrition here as they built an airfield at the behest of the Japanese military during World War II.

Eventually, Mr. Mizuguchi helped find the graves, and he and other residents began building a six-foot stone memorial at the site. Himeyuri no Tõ, 1975: The Memorial that Nearly Killed a Crown Prince. Hitomi Watanabe’s “Tokyo University 1968-1969 — Behind the Blockade” takes us beyond the barricades. Man who documented Minamata outbreak wins Domon Ken Award. Between a rock and an art place in Kurashiki's merchant quarters.

Timing, as they say, is everything. With a bad habit of turning up to places and appointments too early, I often find myself wandering through train stations and pocket parks, and past the shuttered doorways of shops. I’ve done it again — 7 a.m. is clearly the wrong time to arrive in historic Kurashiki, a city just beginning to wake up. The station area at this hour is bleak, the shabby contemporary city replicating 1,000 other randomly cobbled together urban melees. Autistic people find independence at unique facility in Saitama. Due to a dearth of job opportunities in Japan for autistic people, mainly deriving from a lack of understanding toward the disorder, it is often difficult for them to lead independent lives after they attain adulthood.

Special Education on Japanese Special Education. An English teacher walks out of a classroom with two students with down’s syndrome, a student with polio, and two “regular” students. Japan’s first 'curry rice' recipe? Although it may not rank in gastronomic terms with such delicacies as sushi, sashimi or Kobe beef, “curry rice” (karē raisu カレーライス) is one of Japan’s most popular dishes and favourite comfort foods.

Niigata home brews enhance teatime. # Shooting is underway on a major documentary film about one of the world’s largest fish markets, Tsukiji in central Tokyo, before the facility closes and reopens at a new location. “The Wages of Resistance: Narita Stories”: A documentary about Sanrizuka’s dissenting farmers. When the new low-cost carrier terminal opened at Narita Airport recently much of the overseas media reacted with glee to the design: a bold “running track” interior fitted out with Muji furniture. Credit where credit is due; it is a cool and original idea. LIFE OF YOUNG GEISHA: Teenagers knock on door to enter traditional world of geisha.

In Japan, Will Hafu Ever Be Considered Whole? Book is behind bullying of mixed-race children. Japan’s Nigerians pay price for prosperity. A Different Vision for Japan — A Response to Gregory Clark « Silver Web Journal. Political and Cultural Perspectives on Japan's Insider Minorities. Yokai. Aokigahara: Japan’s Haunted Forest of Death.

Old Stories of Japan(ÆüËÜÀÎ¤Ð¤Ê¤·±ÑÌõÈÇ¡¦±Ñ¸ìÈÇ¡¦ÆüËÜ¸ìÌõ¡¦°¦¾§²Î¡¦¤ï¤é¤Ù²Î¡¦»Ò¼é²Î¡¦À¤³¦¤ÎÌ¾¶Ê¡¦ÆüËÜ¤ÎÌ¾¶Ê) Translated Japanese Ghost Stories and Tales of the Weird and the Strange. Delivering Quality On A Tight Schedule: Speaking With ‘Ping Pong’ Art Director Aymeric Kevin. A Not-So-Neat Collage of Daily Life: The Work of Kon Wajiro. The Subculture of Japanese Trucker Art. 'I did not know how to tell my parents, so I thought I would have to have an abortion' What we talk about when we talk about love & sex in Japan. Women of the Yakuza.