A winner! The core of the new defences are made from debris from the 2011 tsunami and contain lots of air pockets. @johncurtinEA To grout or not to grout? Depended on toe protection on landward side of wall - presumably efficiency of drainage varied according to this? See 4.2.3. Implications of the 2011 Great East Japan Tsunami on sea defence design. 1. 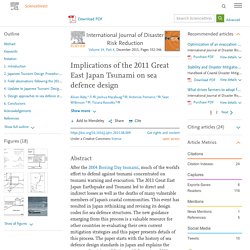 Introduction In 2011 Japan was considered to be the best prepared nation on earth to withstand a large tsunami attack on its coasts, with sea defence structures (breakwaters, sea dikes and seawalls) specifically designed to afford sufficient protection to coastal settlements and critical infrastructure. Massive detached breakwaters were built in bays to defend great industrial ports and their populations; sea dikes were constructed along much of the coastal plain areas to protect low-lying agricultural land and towns from both tsunamis and storm surges; and seawalls, some of which were 10 m or more in height, were built as a result of previous tsunamis to provide protection for busy settlements.

However, the size of the waves generated by the unexpectedly large magnitude of the 2011 Great East Japan Earthquake (Moment Magnitude 9) led to sea defences and other coastal structures being overwhelmed and in many cases completely or partially destroyed. 2. Fig. 2. 3. Fig. 4. Fig. 5. 4. @johncurtinEA Here’s what happens when you don’t have them to release air pressure when a big wave hits! (Ok, so a bit different as this apron should be covered in sand, and now is thanks to the sandscaping project). □ A quick quiz - with answer now attached but try a guess first #tsunami #Sendai. The #homer spit is being evacuated. There’s been a massive #earthquake to the south and the tsunami sirens are blaring. Cars are streaming up Skyline, one after the other outside my window. #Alaska.

Tsunami warning poster: Kaiteriteri, Tasman NP, NZ.… Tsunami evacuation information board: Russell, Bay of Islands, NZ.… Experiments of Tsunami forces on vertical evacuation structures as part of ⁦@NHERIDesignSafe⁩ in the Large Wave Flume at ⁦@OregonState⁩. It’s #FlumeFriday. UNDRR sur Twitter : "The 2011 Japan #tsunami hit Amahara Elementary School with huge force but 320 people survived on the roof. Since the derelict building was made into an exhibition space two years ago, 200,000 people have taken the guided tour #Tsunami. *****UN Development: The 2004 Indian Ocean #tsunami was devastating, wiping away villages, claiming more than 230,000 lives & displacing millions across 14 countries. See @UNDP_India’s □ awareness tips to protect yourself & your family. #WorldTsu. *****UNDRR inertia: Time to leave the #tsunami evacuation tower....Reluctance to evacuate is a factor in large loss of life from tsunamis. #TsunamiDay raises awareness of the risk and the way to avoid loss of life. Read how drills are done in #Japan http.

*****UNDRR: 1,000s of people will take part in a #TsunamiDay evacuation exercise tomorrow in #Sendai the nearest major city to the epicentre of the 2011 #earthquake and #tsunami in which many local people died. Photo shows one of the city's evacu. What happened in the 2009 South Pacific earthquake-tsunami disaster? Just before 7am on September 29, 2009, a magnitude 8 earthquake struck the sea floor in the central South Pacific, about 190kms south of Samoa. 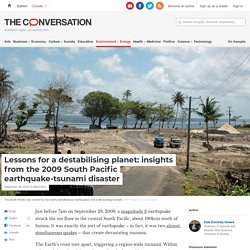 It was exactly the sort of earthquake – in fact, it was two almost simultaneous quakes – that create devastating tsunami. The Earth’s crust tore apart, triggering a region-wide tsunami. Within minutes it inundated Samoa’s coastline, before rolling on to American Samoa and Tonga. Read more: Explainer: after an earthquake, how does a tsunami happen? While a tsunami warning was issued by the Pacific Tsunami Warning Center and relayed by Samoan officials, it was not rebroadcast everywhere. Ten years on from this tragedy, it’s time to look back at the lessons we learned – and how they can help us adapt to a rapidly changing climate, which is making similar natural disasters more and more likely. Found in Bali behind the beach on the way to the hotel. #DRR @UCLIRDR… Man-made mountain built as tsunami evacuation area for 600 people completed just last month for area of high value reclaimed land far from higher ground or strong buildings…

New study of a #tsunami in the South China Sea which struck Guangdong in 1076 shows tsunami risk "should be considered in future planning and construction of nuclear power plants. Complacency kills: Caribbean gears up for tsunamis. Image copyright Robert Nickelsberg/Getty The last time a major tsunami hit the Caribbean region was in 1946, after an 8.1-magnitude earthquake struck the Dominican Republic on the island of Hispaniola. 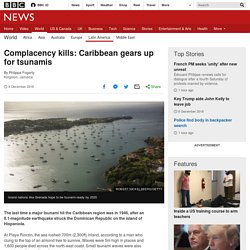 At Playa Rincón, the sea rushed 700m (2,300ft) inland, according to a man who clung to the top of an almond tree to survive. Waves were 5m high in places and 1,600 people died across the north-east coast. Small tsunami waves were also recorded in Puerto Rico, Bermuda and even New Jersey. Since then, a handful of tsunamis have occurred - in Panama and Costa Rica in 1991 after an earthquake, and in Montserrat in 1997 after a landslide of volcanic debris. Over the same period, populations have more than doubled and tourist numbers on Caribbean beaches have soared, passing 30 million in 2017. 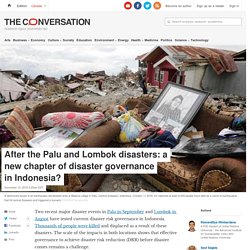 Thousands of people were killed and displaced as a result of these disasters. The scale of the impacts in both locations shows that effective governance to achieve disaster risk reduction (DRR) before disaster comes remains a challenge. Are we doing it the right way? Tsunamis cannot be averted, but they can be predicted so people can escape. Early warning and disaster prevention and preparedness are paramount. #TsunamiDay. UNISDR sur Twitter : "#tsunami losses over last 20 years: 251,770 deaths and US$280 billion economic losses (1998-2017). Compared with 998 deaths and US$2.7 billion in recorded losses from tsunamis over the previous 20 years (1978-1997) #TsunamiDay2018 #R.

UNDP Asia-Pacific sur Twitter : "1️⃣ day to #TsunamiDay2018! Despite significant progress in tsunami sciences, the death toll continues to be devastatingly high. It doesn’t have to be. Read blog by @HaoliangXu, @UN ASG #90Drills #S. Pierre Prakash sur Twitter : "On #TsunamiDay2018, a reminder to all on how to behave when you feel a strong #earthquake near the seashore. Since quakes often destroy power and communication networks, it is best to rely on your own reflexes rather than wai. John Curtin sur Twitter : "This is one of the many ‘Hope Hills’ or ‘Hills of Life’ built on the Japanese coast. Made from the debris of the 2011 tsunami they provide evacuation points for future floods. On top is solar power, shelter & benches that become.

John Curtin sur Twitter : "The main coast highway east of Sendai is raised above the low coastal land and acted as a barrier to the tsunami in 2011. It now forms an integral part of the local evacuation plans for future floods - with other roads also bein. John Curtin sur Twitter : "So hopefully I’ve given you a feel for the inspirational recovery work still ongoing in Japan after the tsunami - work I’ve had the privilege of seeing first hand & can’t begin to do justice on Twitter. Let’s not forget the 19 3.

A winner! The core of the new defences are made from debris from the 2011 tsunami and contain lots of air pockets… So a quick quiz for all you Flood Engineers out there. Why are there these holes in the top of the new coastal tsunami defences built in NE Japan after the 2011 tsunami? #FloodAware… S3- Japan Earthquake and Tsunami. Sashimi and tsunami: Japan’s preparation for tectonic disasters. *****NOAA videos re preparation for tsunamis. Tsunamis: Be Prepared and Stay Safe! 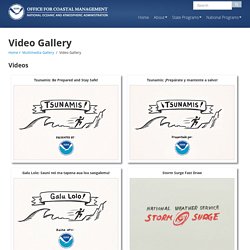 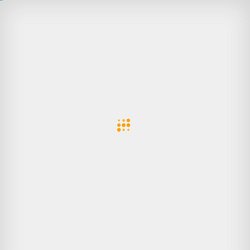 But we knew we needed to do more in training, exercise and raising public awareness. In 2009, NOAA and our partners, including the American Samoa Department of Homeland Security (ASDHS), reached out to educate the community about preparing for a local tsunami threat. In the worst case, there would be only 10-15 minutes before the first wave attacked. People needed a response plan and to know how to self-evacuate. Schools located along the shoreline were especially vulnerable. Luckily, ASDHS planned a tsunami evacuation exercise on September 27, 2009 for Matatula Elementary School in Tula village. On September 29, a radio communication exercise was planned for the main port of Pago Pago, and VHF radios were distributed. 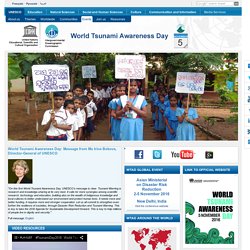 These two themes come together in the Japanese story "Inamura no Hi", which tells how a farmer anticipated the 1854 Ansei Nankai earthquake and tsunami, and saved his fellow villagers by burning his entire rice crop to alert them to the danger. The "Inamura no Hi" story exemplifies the power of knowledgeable citizens to save lives.

The ball that could save your life in a natural disaster…