Goat Cheese and Prosciutto Mini Crustless Quiches » The Table. It’s officially fall, but there are still quite a few flowers sticking around in the backyard. They attract all sorts of butterflies and hummingbirds (although the hummingbirds have been a bit elusive around my camera). The bumblebees still seem to be enjoying them too! Autumn brings lots of comfort food, so I decided to make a lighter version of the classic quiche to start off the fall season. Deliciously declassified. This frittata is easy and will please the adults and kids because it’s pretty hard to go wrong with ham, cheese and potatoes. You could, however, make any possible substitutions for the filling and it would be just fine, which is the beauty of frittatas. 12 extra large eggs1 cup half and half1 tsp salt1/2 tsp pepper 1 large russet potato, thinly sliced3 scallions (about 1/3 cup), chopped1 tbsp olive oil1 cup ham (you could use good deli ham as well), chopped1 cup shredded cheddar cheese. Lefse (Norwegian Potato Crepes)

There are some dishes that, upon hearing about them for the first time, you're immediate reaction is "hm. 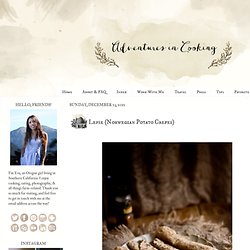 " Sometimes that is warranted, but sometimes you need to try the dish to understand how delicious it is. Lefse is one of those dishes. Lefse is a Norwegian holiday dish that consists of thinly rolled potato-crepes cooked on a griddle, covered with various toppings, and rolled up into a cylinder. The idea of crepes made from potatoes and served with sweet dressings can at first sound a bit odd, mostly because here in the U.S. potatoes are pretty much served entirely as a savory item. Very rarely are they ever utilized in sweets. Cheddar Crêpe Packets. We’re having a lazy snow day at home. 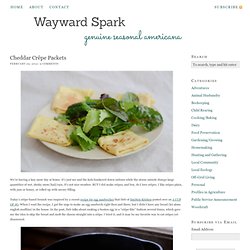 It’s just me and the kids hunkered down indoors while the storm outside dumps large quantities of wet, slushy snow/hail/rain. Arepas for Breakfast. Arepas are traditional Venezuelan street food. My husband is Venezuelan, and they are one of his favorite meals of all time. Breakfast slab pie. I suspect by now that most of you are on your way to where you’re headed, physically and possibly proverbially. 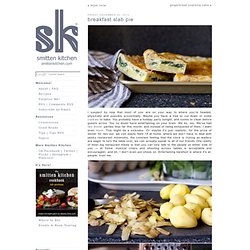 Spinach and egg pizzette. This, this mash-, roast-, horseradish-, bangers-, crisps-, and goose fat-free, is one of my favorite things I ate while I was in the UK, and it’s not even British. 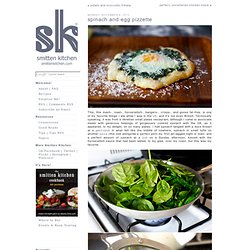 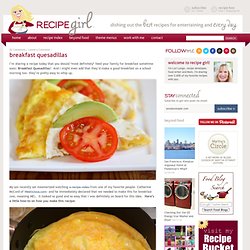 And I might even add that they’d make a good breakfast on a school morning too- they’re pretty easy to whip up. My son recently sat mesmerized watching a recipe video from one of my favorite people- Catherine McCord of Weelicious.com- and he immediately declared that we needed to make this for breakfast (we, meaning ME). It looked so good and so easy that I was definitely on board for this idea. Recipes: Scrambled Eggs a la Escoffier. Serves 2. 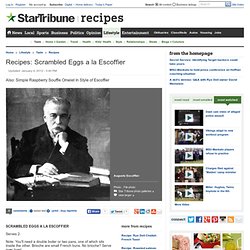 Note: You'll need a double boiler or two pans, one of which sits inside the other. Corned Beef Hash. Save to My Recipes This recipe is a two-step process, but nothing about it is difficult. 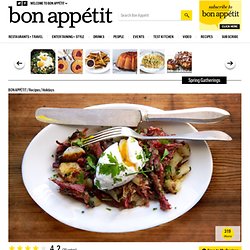 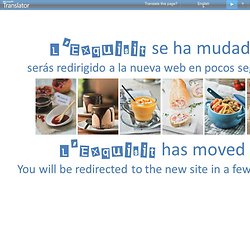 Ingredientes para la tarta (4 personas – molde 20 cm. Individual Sweet Potato Breakfast Pizzas. By Lauren Zembron, on March 20th, 2012 When I found out about the 2012 North Carolina Sweet Potato “No More ‘Mallows” Blogger Recipe Contest, my mind went in a dozen different directions with ideas of what to make. 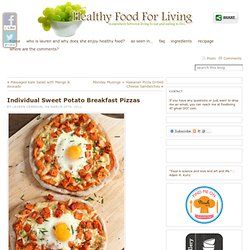 My initial instinct was to make something sweet, but I eventually decided to push the envelope by going the savory route. I settled on a sweet potato version of my Individual Breakfast Pizzas, and decided that in order to fully pay homage to my very favorite food, I had to incorporate the orange vegetable into the recipe in not one, but two ways. Gateau de Crepes a la Florentine...Julia Child per l'MTC. Southwestern Eggs Benedict with Black Bean Spread, Avocado & Salsa Recipe.

The Perfect Poach. Traditional Oeufs en Meurette from Burgundy. Wine poached eggs in a nest of mushrooms and bacon on toast. 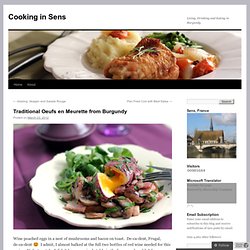 De-ca-dent, Frugal, de-ca-dent :) I admit, I almost balked at the full two bottles of red wine needed for this recipe. Baked Eggs with Bacon and Spinach. Do y’all remember the scene in Runaway Bride (that’s an Oscar contender if I’ve ever seen one…) where Julia Roberts realizes that she doesn’t know how she likes her eggs? You know, because she’s always turning herself into the girl that the guy she’s marrying wants to be with? Yeah. Make-Over Breakfast Sausage and Mushroom Strata.

A make-ahead breakfast casserole made with day old bread, eggs, cheese, sausage and mushrooms. This recipe from the archives is perfect for Christmas morning so I thought I would revive it to give it some attention. You can make this with just about anything, just use your imagination! Breakfast stratas can be pretty high in fat, generally using at least 8 eggs and 2 to 3 cups of cheese. Pommes Anna. Normally, I would have saved this recipe to feature for a future Sunday Dinner, but after the first bite, I knew I needed to share it right away. Four ingredients brought together with the right technique can provide a side that will surely be dug into for seconds. The golden, crunchy crust gives way to the tender layers inside lending a pleasing texture to the tasty proceedings. Eggs on Hash. Farmgirl Gourmet: Delicious Recipes for the Home Cook.: Shakshuka - Secret Recipe Club.

Today’s Secret Recipe Club reveal comes to you from Fried Ice & Donut Holes. How to poach an egg, smitten kitchen-style. Huevos rancheros. Boozy baked french toast. “Jocelyn, come over. French Ham, Cheese and Egg Crepes, step-by-step. One of my favorite food memories from my trip to Paris a few months ago was going out late at night near the Eiffel Tower and queuing up with a bunch of other people to get freshly made crepes, then sitting in the park enjoying the lights of the tower while eating. Secret Recipe Club: Crepes. Molletes with homemade bolillos. Do you love refried beans and cheese? True grits. Tortilla de patatas. Baked eggs + chive biscuits + bloody marys. Korean Ham & Eggs with Maple Chile Sauce. Baguette Filled With Prosciutto, Scrambled Eggs, And Bacon. Baked Eggs in Bacon Baskets.