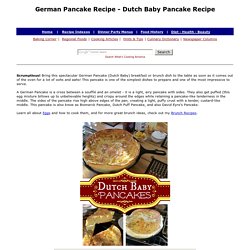 Preheat oven to 450 degrees F. NOTE: It is very important that you preheat your oven. Place oven rack on the middle rack of your oven. NOTE: Use a shallow pan, not more than 3 inches deep (pie pans, cast iron skillets, oven-proof fry pans, baking dishes, paella pans). 2. Using pot holders, remove the hot skillet from the oven; add the butter; tilting the pan to melt the butter and coat the skillet. The Wanna be Country Girl. This hash-brown casserole is the perfect side dish. 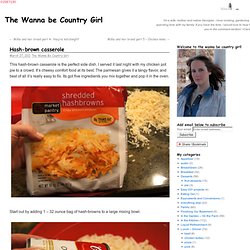 Alexandra's kitchen — seasonal recipes for everyone. I swear buttermilk is magic. 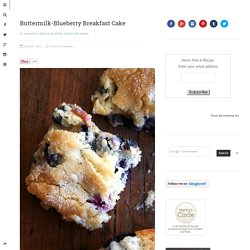 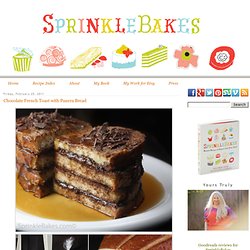 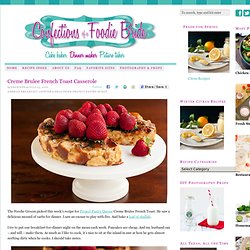 A Tasty Recipe: Stuffed French Toast – Tasty Kitchen Blog. Since Ree is somewhere in D.C. right now with her gushing armpits (sorry for that visual on a cooking blog), we’ve invited a very special guest to host the Tasty Recipe post this week. 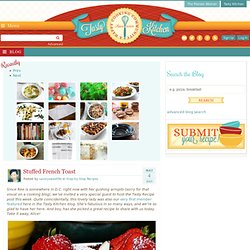 Quite coincidentally, this lovely lady was also our very first member featured here in the Tasty Kitchen blog. She’s fabulous in so many ways, and we’re so glad to have her here. And boy, has she picked a great recipe to share with us today. Take it away, Alice! Banana-Stuffed French Toast Recipe at Epicurious. Try This! How To Make Candied Salted Bacon. There comes a time in everyone's life when you're standing in the kitchen at 2am (pants optional) testing recipes. 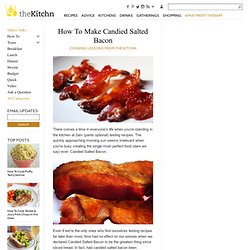 The quickly approaching morning sun seems irrelevant when you're busy creating the single most perfect food (dare we say) ever. Candied Salted Bacon. Even if we're the only ones who find ourselves testing recipes far later than most, time had no effect on our senses when we declared Candied Salted Bacon to be the greatest thing since sliced bread. In fact, had candied salted bacon been discovered before sliced bread... well you get the picture. Baked Eggs in Bread Bowls.

This was our breakfast Sunday morning. 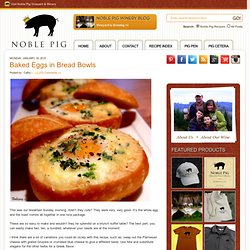 Aren’t they cute? They were very, very good. It’s the whole egg and the toast combo all together in one nice package. These are so easy to make and wouldn’t they be splendid on a brunch buffet table? The best part, you can easily make two, ten, a hundred, whatever your needs are at the moment. Idaho sunrise (baked eggs and bacon in potato bowls) I probably should have poured a nice stiff drink recipe for you all on this loveliest of lovely tax days. 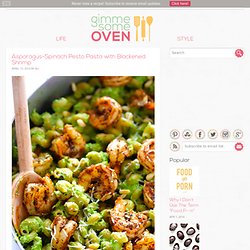 Especially for my fellow small business owners who just gave half of their revenue back to the government. Good grief, I won’t even go there. Instead though, I thought I’d offer my idea of a more comforting alternative. Pasta. When life is good, and when life gets crazy, I turn to pasta. And just as it has for years, this one hit the spot. Read more. Baked Eggs with Bacon and Spinach. Do y’all remember the scene in Runaway Bride (that’s an Oscar contender if I’ve ever seen one…) where Julia Roberts realizes that she doesn’t know how she likes her eggs? 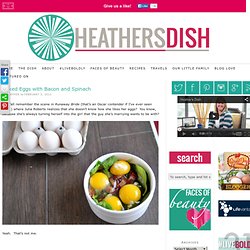 You know, because she’s always turning herself into the girl that the guy she’s marrying wants to be with? Yeah. That’s not me. I know how I like my eggs, although I will say that it depends on the day. If it’s a scrambled kind of day then I want them scrambled with NO MILK, a tab of butter, and salt and pepper. My Favorite Pancake Recipe. We've all had blueberry pancakes with maple syrup, and pancakes with blueberry syrup, but what about a tall stack of golden butter-kissed pancakes with blueberry maple syrup? I'm going to go out on a limb and say these Whole-Grain Pancakes with Blueberry Maple Syrup are the best pancakes I've ever made, my favorite pancake recipe to date. The pancakes are fluffy and golden and light, and the blueberry syrup is delicious, fragrant and beautiful without being overly sweet.

I've been playing around quite a lot recently with white whole wheat flour. It is the Trojan horse of whole-grain flours, because for finicky people who won't eat anything brown or good for them you can pass it off as white. It is made from a strain of hard white winter wheat berries (I remember reading somewhere that it is a naturally occurring albino strain?) The whole blueberry maple syrup is perfectly delicious and great when fresh blueberries come into season. Sour Cream Corn Pancakes. I am not a lover of pancakes, except for The Pioneer Woman’s Sour Cream Pancakes. Jamaican Banana Fritters - ThatsSoYummy.com. There’s a thing in my house that when you have ripe ol bananas either you make banana bread or banana fritters. These delicious tasty treats can be eaten morning, noon, or night, as a snack or as dessert. These fritters are so easy to make and will satisfy any craving you may have. So if you have a few of these bananas lying around your hose… don’t toss them, put them to GREAT use!

Enjoy! Steffen's Dinners - Recipes and Photos. Printer-friendly version PDF version. Pumpkin Fritters. These Have Lazy Morning Written All Over Them. The Ultimate Cinnamon Rolls. Ul⋅ti⋅mate [uhl-tuh-mit]–adjective 1. last; furthest or farthest; ending a process or series: the ultimate point in a journey 2. maximum; decisive; conclusive: the ultimate authority; the ultimate weapon. 3. basic; fundamental; representing a limit beyond which further progress, as in investigation or analysis is impossible 4. not to be improved upon or surpassed; greatest; unsurpassed: the ultimate recipe; the ultimate cinnamon roll. In every aspect of the word, ultimate is the right descriptor for this recipe. Cinnamon Roll Pancakes. Sticky Lemon Rolls with Lemon Cream Cheese Glaze.