Tidal lagoon: £1.3bn Swansea Bay project to be backed. Cheap African solar energy could power UK homes in 2018. 20 October 2014Last updated at 02:33 ET By Matt McGrath Environment correspondent, BBC News An impression of what a large-scale concentrated solar power facility might look like in the Tunisian desert Investors are seeking funding from the UK government for an ambitious plan to import solar energy generated in North Africa. 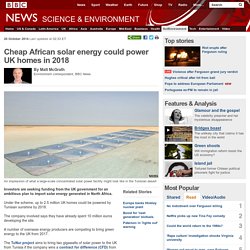 Under the scheme, up to 2.5 million UK homes could be powered by Tunisian sunshine by 2018. The company involved says they have already spent 10 million euros developing the site. A number of overseas energy producers are competing to bring green energy to the UK from 2017. Lockheed Martin thinks it can give the world unlimited clean energy in 20 years. Tidal power generator unveiling hailed as landmark. Researchers develop cheaper way of making solar cells. Researchers have developed a new manufacturing method which could bring down the cost of making a type of solar cell. 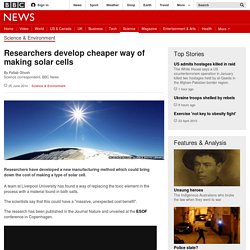 Plas Newydd: Heat from the sea to warm historic house. 22 May 2014Last updated at 00:49 ET By Roger Harrabin BBC environment analyst Roger Harrabin reports: ''It is the sea that is going to heat this house'' One of the finest old mansions in Wales is making history with a new technology that sucks heat from sea water. 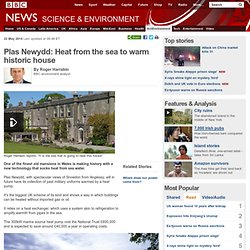 Plas Newydd, with spectacular views of Snowdon from Anglesey, will in future have its collection of past military uniforms warmed by a heat pump. It's the biggest UK scheme of its kind and shows a way in which buildings can be heated without imported gas or oil. It relies on a heat exchanger, which uses a system akin to refrigeration to amplify warmth from pipes in the sea. The 300kW marine source heat pump cost the National Trust £600,000 and is expected to save around £40,000 a year in operating costs. Plas Newydd was previously the National Trust's most polluting property, warmed entirely by an oil-fired boiler. Pentland Firth tidal turbine project given consent. 16 September 2013Last updated at 08:06 ET Each of MeyGen's AR1000 turbines stands 22.5m (73ft) tall and weighs 1,500 tonnes Work is to begin on the largest tidal turbine energy project in Europe after the Scottish government approved it. 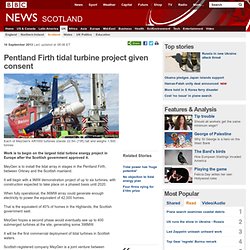 MeyGen is to install the tidal array in stages in the Pentland Firth, between Orkney and the Scottish mainland. It will begin with a 9MW demonstration project of up to six turbines, with construction expected to take place on a phased basis until 2020. When fully operational, the 86MW array could generate enough electricity to power the equivalent of 42,000 homes. New crystals yield solar power breakthrough. 16 July 2013Last updated at 17:07 GMT By Simon Redfern BBC News Dye-sensitised solar cells promise cheaper renewable energy New materials technology has boosted the power conversion efficiency of cheap next-generation solar cells. 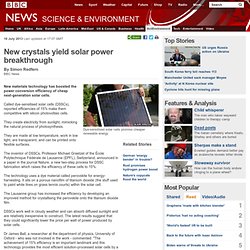 Called dye-sensitised solar cells (DSSCs), reported efficiencies of 15% make them competitive with silicon photovoltaic cells. They create electricity from sunlight, mimicking the natural process of photosynthesis. They are made at low temperature, work in low light, are transparent, and can be printed onto flexible surfaces. Rust promises hydrogen power boost. 8 July 2013Last updated at 13:27 ET By Simon Redfern BBC News The cauliflower-like nanoparticles are grown as a layer on an electrode Rust could help boost the efficiency of hydrogen production from sunlight - a potentially green source of energy. 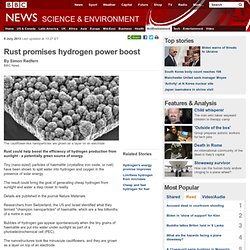 Tiny (nano-sized) particles of haematite (crystalline iron oxide, or rust) have been shown to split water into hydrogen and oxygen in the presence of solar energy. The result could bring the goal of generating cheap hydrogen from sunlight and water a step closer to reality. Details are published in the journal Nature Materials. Justin Hall-Tipping: Freeing energy from the grid. Window Socket – Solar Energy Powered Socket by Kyuho Song & Boa Oh. The Window Socket offers a neat way to harness solar energy and use it as a plug socket. 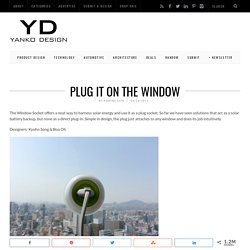 So far we have seen solutions that act as a solar battery backup, but none as a direct plug-in. Simple in design, the plug just attaches to any window and does its job intuitively. Justin Hall-Tipping: Freeing energy from the grid. Google acquires kite-power generator. Google has acquired a US company that generates power using turbines mounted on tethered kites or wings. 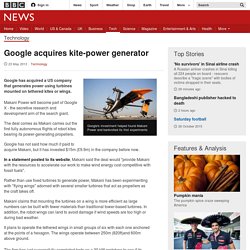 Makani Power will become part of Google X - the secretive research and development arm of the search giant. The deal comes as Makani carries out the first fully autonomous flights of robot kites bearing its power-generating propellers. Google has not said how much it paid to acquire Makani, but it has invested $15m (£9.9m) in the company before now. In a statement posted to its website, Makani said the deal would "provide Makani with the resources to accelerate our work to make wind energy cost competitive with fossil fuels". Rather than use fixed turbines to generate power, Makani has been experimenting with "flying wings" adorned with several smaller turbines that act as propellers as the craft takes off. Makani claims that mounting the turbines on a wing is more efficient as large numbers can be built with fewer materials than traditional tower-based turbines.